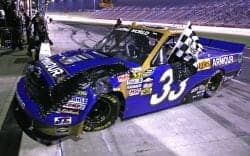 Ron Hornaday suffered some damage to his truck in an early race incident but was able to continue and used pit strategy to his advantage to take the win in Atlanta.

*In a Nutshell:* Ron Hornaday, Jr. took the checkered flag 1.596 seconds ahead of Clint Bowyer to win the Good Sam Club 200 Friday night at Atlanta Motor Speedway. Hornaday used pit strategy and was able to stay out on the track while many of the front runners pitted for fuel in the closing laps. Kyle Busch, Blake Feese and Ryan Newman rounded out the top 5.

*Who Should Have Won:* *Clint Bowyer* Simply put, Clint Bowyer had the truck to beat Friday night. Bowyer ran eighth quickest in the first practice session, and the team didn’t even participate in the final practice because they were so happy with their truck. In fact, Bowyer was just edged by 0.005 seconds by Ricky Carmichael and started on the front row. The driver of the No. 2 Bad Boy Buggies Chevrolet easily pulled out to a large lead but was forced to pit for fuel. Had the caution flown sometime during the final 49 laps of racing, there’s no doubt that Bowyer would have taken the lead from Ron Hornaday, Jr.

*1. Would it be a good thing for James Buescher to win the championship after missing a race early in the season?*

After the checkered flag flew over James Buescher’s 10th-place finish, he took the point lead by 12 over Johnny Sauter who has been atop the points standings for most of the season. Passing Sauter was a feat in itself since the No. 13 team has managed to make the most out of their season even when things weren’t going quite right. But what’s really impressive is to consider that Buescher and the No. 31 team missed the Truck Series race at Phoenix after turning a dismally slow lap.

“Everybody on my team was pretty humbled after Phoenix. I know I was. We missed the race just on speed,” Buescher said. “We were flat too slow. We’ve had something to prove all year and we’re not done proving it. We’ve run really strong all year with the exception of Phoenix.”

Since missing the field at Phoenix, Buescher has finished outside the top 10 just once–he finished 35th at Martinsville after being involved in a crash. After the DNF, the 21-year-old has had an impressive average finish of sixth and has led 185 laps so far this season. He currently leads the series in top-5 and top-10 finishes with eight and 15 respectively.

Frankly, it would be pretty amazing if Buescher and his Turner Motorsports team managed to take home the championship after the blow of missing a race. But with all of that being said, the driver of the No. 31 Chevrolet has yet to visit victory lane, and if he can hold on to the lead while piling up consistent finishes, there’s a real chance the champion will go home with the big trophy before scoring his first career victory in the series.

While I have a feeling it’s only a matter of time before Buescher and the No. 31 team head to victory lane this season, would it be a bad thing for the championship to come without a victory?

Sadly, there’s really no simple answer to that question. While Buescher would be a testament to the importance of consistent performance throughout the season, there would be plenty of people complaining that Buescher isn’t a deserving champion because he didn’t win a race. And frankly, I’d worry that NASCAR would feel the same way and try to change the points system AGAIN to ensure that doesn’t happen again.

But why? If James Buescher and the No. 31 team can bounce back from missing the second race of the season at Phoenix and still pull off the championship without a win, then more power to them! It would just be proof of the talent that Turner Motorsports has put behind the wheel this season.

*2. Where did Josh Richards come from?*

Josh Richards made his Camping World Truck Series debut at Kentucky Speedway in July behind the wheel of the No. 15 Joy Mining Machinery Toyota. Richards had problems with his truck and was forced to retire to a 29th-place finish after just 74 laps of competition. And in the three starts following his debut, he finished 22nd, 22nd and 17th. He definitely showed steady improvement but still had a long way to go before he’d be able to compete for wins.

But all of sudden, it appears someone lit a fire under the 23-year-old. Sure, he finished a disappointing 21st-place finish two laps down, but that doesn’t tell the full story of Richards’ night. The young driver started in ninth, a career-best starting position, and managed to remain inside the top 15 for much of the evening. He even made an impressive save on lap 71 after hard contact with Blake Feese. Richards was nearly completely sideways but managed to right his truck and move on while minimizing the loss of track position.

And that wasn’t the only time that happened either. With 49 laps remaining, Richards got loose once again and bounced off of a couple of his competitors, including Ron Hornaday, Jr. who likely saved the No. 15 from spinning, but still managed to keep going. Sadly, the damage from the contact during the second sideways save was enough to change the performance of the truck and Richards was forced to ride around to the end.

While he didn’t rack up an amazing finish, Richards showed he does belong behind the wheel of a race car–or truck in this case. He seems to have the talent and just needs seat time to gain some experience. Granted, he was never a threat for the win, but he had a pretty strong race until damage caused the truck to go south. With the impressive qualifying run and the saves he made on the track with a truck that clearly should have gone around, I look forward to seeing the driver of the No. 15 Toyota continue to grow as he gains more experience.

*No. of Rookies in the Race:* 11 (add Blake Feese, Josh Richards, Charles Vest, B.J. McLeod and a debuting Chris Cockrum)

*Rookie Of The Race:* Blake Feese

“We had a rough day. At the drivers meeting, I didn’t know what to think. We had a great truck all night. I thought I ended our night when I got into the 15 (Josh Richards) or whoever it was. We about wrecked on the frontstretch, but they put a fender on that thing and we were able to drive back through there. Thank Accudoc Solutions and Mr. Turner for giving me the shot. It feels great.” _Blake Feese on his career best finish of fourth_

James Buescher has taken over the points lead by 12 after Johnny Sauter posted a disappointing 29th-place finish, 22 laps off the pace. Timothy Peters remains in third and Austin Dillon remains fourth, 14 and 17 points behind the leader respectively. Ron Hornaday, Jr.’s win propelled him up four spots to fifth, 48 points out of the lead.

There’s a decent chance the Camping World Truck Series will head to Rockingham Speedway during the 2012 season, marking the first NASCAR event at the 1.017-mile track since February, 2004. Citing unnamed sources, “ESPN The Magazine reported”:http://espn.go.com/racing/nascar/truck/story/_/id/6923960/rockingham-host-trucks-race-2012 the announcement should come during a Wednesday afternoon news conference that will be held by track management and North Carolina Governor Bev Perdue.

“At the start of the race somebody checked up, and I went to the right and I got the front fender in. We just kept on taping it up. I told [the crew], ‘We don’t have the best truck, but we can win by fuel mileage,’ and Jeff (Hensley, Crew Chief) made that call right there. I’ll take ’em any way I can get ’em. That’s cool. Everything’s gone wrong the whole year, so something got to go right at least once.” _Ron Hornaday, Jr._

“Of course I’m disappointed, but what a great run. You can’t ask for anything more out of a truck or a team. This Bad Boy Buggies Chevrolet was fast all day long. It’s been fast every time we’ve been in it. We just got out snookered there. You can’t outrun strategy.” _Clint Bowyer, finished second_

“It was a really good race and certainly we had a good truck. It was definitely a second-place truck. The guys here on this Dollar General Tundra did a good job–just wasn’t the best. Congrats to (Ron) Hornaday for winning–it’s good to see the old man back in victory lane and a good weekend for those guys.” _Kyle Busch, finished third_

*Up Next:*
The Camping World Truck Series heads to Chicagoland Speedway in two weeks for the Chicagoland 225 Friday, September 16th. Last season, Kyle Busch edged Todd Bodine by less than two-tenths of a second in a green-white-checkered finish to score his fourth victory of the season. Coverage begins at 8:00 PM EDT on SPEED; the race can also be heard on your “local MRN affiliate.”:http://www.racingone.com/stations.aspx