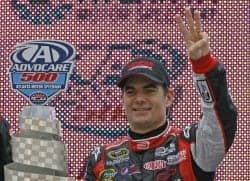 There used to be a time when seeing Jeff Gordon in Victory Lane was of little surprise. Every week he was considered a threat to win, and everyone but his own loyal legion of followers hated to see him do so. He was a young hotshot from out west in a time when the sport was mainly filled with Southerners, and he struggled to earn respect even though he frequently showcased his raw talent.

Lately, though, we’ve seen less and less of Gordon in Victory Lane. Prior to the start of the 2011 season, the four-time champion had earned only one victory from 2008-2010, even after winning six races and falling just short of outrunning Hendrick Motorsports teammate Jimmie Johnson for the title in 2007. It looked as though the kid from California was past his prime and he’d have to hand the reins over to Johnson as the new sheriff in town.

Jeff Gordon scored his third win this season and has re-emerged as a championship contender.

Until this season, that is. A major team swap at HMS over the offseason seems to have favored Gordon, after Steve Letarte was replaced by Alan Gustafson as Gordon’s crew chief and Gordon moved from the No. 48 shop to the No. 5 shop. The No. 24 team came out of the gates strong, winning the second race of the season at Phoenix International Raceway and announcing to the world they were ready to contend for a fifth title right alongside their teammate.

Unfortunately consistency plagued Gordon through the first portion of the season. In the 11 races between his first two victories, Gordon earned only three top-10 finishes and fell to 13th in points. A season that started out so strong seemed to have gone belly up and Gordon was once again considered a non-factor.

Then came Pocono. Gordon only led 39 of the 200 laps in that race, but came away with the victory and tied himself with Bobby Allison and Darrell Waltrip for third on NASCAR’s all-time win list with 84 victories. The win seemed to shoot Gordon out of a cannon, as the next several weeks would see Gordon jump from 11th to 5th in the standings with week after week of strong finishes. He didn’t always have the winning car, but he was there.

In Atlanta, however, he did. A dominant performance at Atlanta Motor Speedway on Tuesday afternoon after waiting out a two day rain-delay, along with a few stoppages for rain and mist during the race itself, led Gordon to Victory Lane where he earned his 85th career win, a moment that was met with all smiles from the driver who pulled it off.

“85, wow, that is unbelievable. I’m just blown away at the kind of day we had and the kind of year that we’re having,” said the 40-year-old veteran. “I just feel rejuvenated in such a big way. It’s because of this race team and the race cars I get to drive. 85 yeah! I can’t wait to get home and celebrate with these guys and my family. 85…wow!”

I may be relatively new to this sport—I started watching regularly in 2005—but I’ve been watching long enough and learned enough of the history to know that Gordon wasn’t always a very popular driver. In fact, he was quite the opposite. And for the longest time I couldn’t figure out why.

Despite being the recipient of many boos from fans in the early days of his career, Jeff Gordon has become more of a fan favorite as he’s gotten older … and perhaps wiser.

Of all the clips and replays I’ve seen throughout Gordon’s career, I could never quite pick up on the very reason Gordon was such an unpopular driver. He seemed more confident than cocky, aggressive but not dirty (usually), and brought the sport onto a mainstream stage it had never been a part of before. And that mentality remained as I followed Gordon in my first few seasons of following the sport.

Dale Earnhardt, Sr. made sense. Darrell Waltrip wasn’t hard to figure out either. But the hatred for Gordon had me confused and left me with but one conclusion: He was just … different.

His youth and his open wheel background already made him the black sheep of the rough and tumble Southerners on the track, and mixed together with his almost immediate success, this made him an enemy. Sure he picked up fans along the way, as he rightfully should have, but I believe there are still traditionalists who still haven’t forgiven Gordon for changing the scene of the sport forever.

Regardless, though, times have changed. And with it, it seems, so have the fans. During his post-race interview in turn two of Atlanta Motor Speedway, an exuberant Gordon was almost giddy with excitement and could hardly stand still as he talked to ESPN pit reporter Dr. Jerry Punch over the PA system. As Punch made both Gordon and the fans aware of his 85th win, the grandstands erupted with nothing but sheer praise from the small crowd of folks who were able to attend a Tuesday race. No boos. No obscene gestures. Just cheers. Cheers of excitement, congratulations, and maybe even some nostalgia. After all, I can’t imagine there weren’t some fans sitting in the grandstands who have watched Gordon’s career blossom from the very beginning.

Needless to say, Gordon has earned his place in this sport. Though his teammate still steals the spotlight on almost every occasion, Johnson has also inherited the ire of the fans, a torch that I’m sure Gordon was more than willing to pass on. Anymore, a win from Gordon is refreshing, as he celebrates each victory as if it were his last with an excitement and gratitude that even some of the sport’s first time winners can’t match. The No. 24 driver is loving life right now with a fast racecar, dedicated sponsors, and a family he loves waiting for him at home when they aren’t already there to celebrate with him.

For now, Gordon is solidly locked into the Chase and at the current moment looks to be one of Johnson’s biggest threats for the title. Whether or not this streak will continue remains to be seen, but one thing is for sure. If it’s Gordon, not Johnson, holding the championship trophy in Homestead, you can guarantee there will be plenty of cheers from atop those grandstands. And those who hated him from the beginning won’t be able to help but smile when they think back to that baby-faced-with-a-mustache kid from California, and how he changed the sport forever.