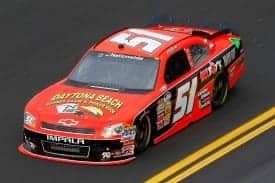 _Jeremy Clements has been around the Nationwide Series for some time, but 2011 is the first year he could call himself a Nationwide Series full-timer. He and his family-owned No. 51 team have learned the hard way just how much work and toil a 35 race schedule entails. But fresh off back-to-back top 15 runs at Atlanta and Richmond, signs are emerging that one of the more underrated operations on the circuit in 2010 is finally getting their arms around the Nationwide COT. Frontstretch caught up with Clements at Richmond to discuss a stellar run at Atlanta… and what’s in store for the future of the No. 51 and its driver._

Bryan Davis Keith, Frontstretch.com: *15th at Atlanta, it’s been a while since your team has shown that kind of strength on an intermediate oval. Was that performance the culmination of a work in progress?*

Jeremy Clements: 14th, actually. We had sticker tires the whole night at Atlanta to be honest, that’s how we were able to stay up there all night.

Keith: *Did the tires make that much of a difference? Has your team gotten to a point that that’s the difference between 14th and 24th?*

Jeremy Clements and the No. 51 team have come a long way since Daytona, and are starting to show signs of their 2010 form.

Clements: We’re getting to that point where tires make the difference between 14th and 24th on an intermediate oval. I hate to say it, but I think we’re going to run like junk tonight (prediction that proved wrong, Clements finished 14th at RIR that Friday night). Still, we’re running better. We were running 16th at Bristol and then we had a slow leak in the right front tire that wouldn’t let me turn the car. We tried to ride it out waiting for a caution, then it never came. Then we go to Atlanta, and we had sticker tires up until that last caution, and we had to put on four-lap old tires. That sucked, without that caution we could have challenged for the top 10.

Keith: *How much of an adjustment has it been for your team to tackle a full schedule for the first time?*

Clements: Full-time racing is a lot different. Obviously we’re getting ready every week now, that takes a lot out of a little team. Once the season gets going, you start trying to get the car to the track instead of making it better. That makes you start short-cutting. And short-cutting and not being prepared kills a team. We’ve had parts break, parts fall off our cars, even when we’ve had decent cars.

We’re definitely getting better, though. We started this season with one car, we were not prepared whatsoever. Now we know the cars somewhat. We have three cars, we’re making progress trying to round up two more. We’re to a point where we can get a road course car, get a superspeedway car. We do that, keep ourselves up in the points, we can use that points money at the end of the year to actually prepare for 2012.

Keith: *You talk about short-cutting, preparation. Improved or not, you’re still a team of limited means. Does that impact what you can and can’t do on the race track?*

Clements: I’m still driving my butt off out there every race. I still race hard, but I have to avoid awkward situations. I won’t hold people up. I just can’t do stupid stuff. That’s always in your mind behind the wheel.

Keith: *With preservation of your cars always in mind, does it ever cross your mind to stake your chances securing a few races with a major team instead of playing the underdog every weekend?*

Clements: Not really, because there’s not really a way to make that work. Racing the way we do, there’s really no way to pool enough money to equal a full-time race with a big-team. We need the purse continually to be able to get to the track the next week and collect the next purse.

Keith: *You’re doing Nationwide racing the hard way, but you’re still able to say you’re a full-time competitor in a major NASCAR series. For all the struggles, has it been worth it?*

Clements: Absolutely. Even for all the work, this has been a dream come true. I love coming to the track and doing this stuff every week, I’m a racer. I love getting the opportunity to race every weekend against guys as talented as race in the Nationwide Series. And as far as 2011 goes, we’re getting to a point where we can get the top 10 that we’ve been shooting for all season.