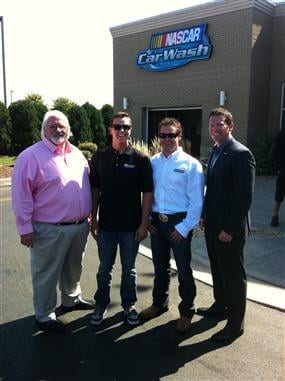 Trevor Bayne and Ricky Stenhouse, Jr., up-and-coming NASCAR “young guns” have had their share of battles on the racetrack this season. But while Stenhouse is winning the war, in the hunt for a first-ever Nationwide Series title Bayne already has a Daytona 500 trophy to his credit – seemingly tipping the short-term, on-track edge in his favor.

Just don’t pick the 20-year-old Tennessean when it comes to cleaning your car. On Thursday, Stenhouse earned a notch back in his belt, the competitive teammates from Roush-Fenway Racing going at it for fun to see who could wash a vehicle the fastest. Stenhouse came clean first, registering a time in under two minutes to the delight of a packed house near Chicagoland Speedway as part of the sport of NASCAR’s newest partnership: car washes.

The idea was the brainchild of Dan Dyer, the new CEO of a company that opened two locations around the Midwestern oval this week in conjunction with Sunday’s Chase for the Sprint Cup debut. It makes perfect sense, when you think about it; a sport known for getting cars in and out of the pits in lightning speed will now do the same with personal cars, at reasonable prices while leaving your vehicle the shiniest one in town. Offering anything from a “Speedway Wash” to a “Victory Lap Monthly Membership,” the automatic machine service is the perfect match for anyone’s car cleaning needs.

Dyer’s Grand Opening Celebration, continuing throughout the coming weeks became the culmination of a yearlong plan, one where the businessman secured exclusive rights to market the NASCAR logo in several car washes across North America. Starting local, with his first franchise in small-town Romeoville, Illinois his plan is to build a national phenomenon, the largest car wash business in the nation where NASCAR brand loyalty and fan’s love of washing their personal vehicles go hand-in-hand.

If recent history is any indication, Dyer’s venture has an excellent chance to succeed. Based on July, 2011 NASCAR Fan Council research, more than three-quarters of NASCAR fans already take their vehicles to automotive companies with a series sponsorship or affiliation. And not only does Dyer inherit that connection, he inherits a fan base in the tens of millions that’s fallen in love with cars. According to Experian Consumer Research, NASCAR fans are 30% more likely than non-fans to own three or more vehicles, as well as 30% more likely to have shopped at automotive-focused stores in the past year. It’s only natural that people don’t want to drive around in dirty vehicles all day, so turning that fan base towards NASCAR-themed car washes seems like a natural next step.

“NASCAR fans are the most loyal fans there are,” he said at the grand opening Thursday, telling “Patch.com”:http://romeoville.patch.com/articles/romeoville-nascar-car-wash-opens-with-stars#photo-7779249 of a poll that shows they’re also 94 percent more likely to purchase a NASCAR-branded product than a non-NASCAR product.

“We think even if you aren’t a NASCAR fan, the name is ubiquitous.”

Dyer equates fan’s love of this sport with brand loyalty, one of the primary reasons sponsors fight each season to put their names on anything from Victory Lane to your favorite race car. There’s plenty of survey evidence to back up those claims, too; according to Ipsos Brand Tracker 2010, 84% of avid NASCAR fans agree that when they see the NASCAR logo on something, they know it will be a quality product.

So how quick will NASCAR car washes spread? According to Dyer, business is already building up at a brisk pace. Openings are scheduled across the Midwest in the coming weeks, each location armed with a goal of 10,000 cars per month. And in an economy with jobs few and far between, new investments mean new opportunities within these local communities. An average of 40 people will be hired for each location, and with projected growth of up to 50 car washes throughout Wisconsin, Illinois, Michigan, and Indiana the next five years that means 2,000 additional jobs.

And, just like its partner, NASCAR Car Washes have already entered into the community spirit of giving back. Recent charity initiatives have included a benefit for the Pocono Medical Center’s neonatal intensive care unit, held in late May in conjunction with Pocono Raceway. Called a NASCAR Day Car Wash for Kids, lucky donors got a chance to rev their engines on the 2.5-mile triangle as Dyer’s business built up additional support. The Car Washes also will donate to the Harry and Helen Gray Cancer Center at Hartford Hospital, the Shelter for Abused Women and, of course, the NASCAR Foundation.

According to “Business News Daily,”:http://www.businessnewsdaily.com/nascar-car-wash-1766/ NASCAR Car Wash will operate as a partnership of company-operated units, where Dyer licenses out to operating partners that can own from 15 percent to 49 percent of one or multiple locations. Financial responsibilities and profits are to be split proportionally according to the ownership agreement.

As part of the licensing agreement, NASCAR will review the car wash business plan annually.

“We always look at our relationships as true partnerships,” said Blake Davidson, Vice President of Licensing and Consumer Products at NASCAR. “For us, there are a lot of reasons why I think it makes sense and will produce benefits on our end. Equally, we think that there are good opportunities for why anyone affiliated on the car wash side will reap the benefits on their end. When you put those two things together, one and one equals more than two.”

It’s a partnership that both sides expect to boost business and exposure over the long-term. On Dyer’s end, he hopes the appearance of stars like Bayne and Stenhouse, whom NASCAR brought to yesterday’s big celebration will be the start of a long-term appearance schedule. With everyone from Danica Patrick, to Dale Earnhardt, Jr., to Jimmie Johnson enjoying on-track success these days you never know who might be the next celebrity superstar wiping that sponge on your windshield.

So next time you’re in the Chicago area, take a trip down to your local NASCAR Car Wash. It’s the latest, greatest innovation the sport’s using to connect to its local fan base, all while helping a sagging economy receive a much-injected boost wherever it can help.