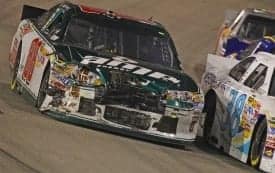 The rule of thumb in Chases past has been, to a certain degree, that you have at least one race to use as a mulligan and still be in line to win the title.

It’s worked since 2004, when Kurt Busch broke a transmission at Atlanta and still came back to win. It was super-close, and he came one great driving maneuver — when the tire came off at Homestead and he missed pit wall — from losing it anyway, but still, he had the mulligan. Even Tony Stewart, during his epic 2005 victory, won by 35 points at Homestead after Greg Biffle won the race to make it that close, had an awful start at New Hampshire and still came back to win it.

But that was in the days of 185-point victories and a much bigger spread. Today’s single-point breakdown means that the margin, slim as it was, is no longer there.

As an exercise, let’s take Chaser A. He starts out with 2,009 points, three behind Chaser B’s 2,012. He leads the most laps (two points) and wins the race, worth three more. That means he has 2,057 points. Chaser B finishes second, having led a lap, and he ends up with a new total of 2,055. Five points change hands… and Chaser A comes out on top.

Let’s play out a similar scenario from past years: 5,030 points to start for Chaser A, to 5,045 for Chaser B. A win for Chaser A means he gains 10 points for laps led, plus 185 for winning. That would give him a total of 5,225 points. Meanwhile, Chaser B runs second, giving him 175 plus five for leading a lap – a total of 5,220. Chaser A starts out further behind… but he’s able to wind up on top after the race, using his win to open a wider margin to boot.

Thanks to the new points system putting a premium on every single point, drivers can’t have a car that looks like this during the Chase and expect to remain in contention for the championship.

So now, the philosophy of the playoffs has to change. The idea of a mulligan in golf is basically to have a do-over with no penalty. Say you hit one into the weeds at the tee box. You can put down another ball, hit it, play it and go on.

In the Chase, if you hit one into the weeds — or drive your car there — you’re not allowed to pull another one out and there IS a penalty. But it has always been a maxim of the Chase that you can have one bad finish and still have a chance. In some years, it’s been more than one, but more often it is just the one.

A blown engine, a crash that wads up your racer beyond the point of laying hands on it to get it rolling… those are Chase killers now. All things being equal, the driver who stays farthest away from those is going to have a chance at Homestead.

New Hampshire, the second race of the Chase, has always been a big problem right off the bat. Flat track, premium on handling, tight pit road… it’s a nightmare.

Plus, at New Hampshire, if you do hit something, it’s coming back on a hook or in a basket. It’s a long way to the wall from the racing line, and you’re going fast enough where it doesn’t make that big a difference where you hit.

Chances are, if you mulligan at NHMS, you’re going to need to play better than par the rest of the way. With tracks like Talladega, Martinsville and Texas in that mix, it’s darn near impossible.

Nothing happens in a vacuum, of course, but you essentially have to race yourself in the Chase. If your Chase buds are screwing up by the numbers, you can’t rest easy, because it could just as easily be you next time out. With the margins not as big, it might seem easier to make up ground, but consider this: if you trail by 40 points, you have to finish a combined 40 spots ahead of your rival to draw even. You can do that in one race, sure, but the chances aren’t that good.

The math is similar, but the points take on a mind of their own.

All in all, if one of the Chasers gets in a hole early, it’s going to be harder than ever to dig out of, because the rest of them will be throwing dirt in just as fast as they can.

At the end of the day, the new points did what they were supposed to, which is even the playing field and reward consistency over victories. Maximum points of 48 is the key. If you max out every race, you’ll wind up with 2,480 points. That’s the best anyone can do.

In the old days, you got 34 points for starting the race, and if you led that was five more. 43rd-place points with no laps led equals…one point. That’s a big deal.

At the end of the day, the Chaser who strings together top-5 and top-10 finishes while staying away from 20th or below is going to win this thing.

Several drivers are capable of doing so, but there are going to be gremlins, pratfalls and pitfalls along the way.

That’s the way it happens, in big-time motorsports.