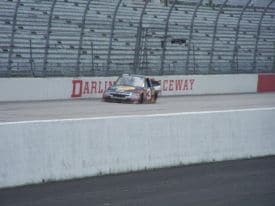 *In a Nutshell:* Kevin Harvick had everyone covered for most of Friday night’s race, but in the closing laps had a vibration which forced the team to change four tires on their final pit stop. Austin Dillon’s team performed a two-tire stop faster than anyone else during the late-race fuel stops and Dillon maintained the lead he gained from that exchange of stops to outdistance Harvick to take his fourth career Truck Series win. Nelson Piquet, Jr., Parker Kligerman, and Kyle Busch rounded out the top 5.

*Who Should Have Won: Kevin Harvick* There was no question that Harvick had the best truck in the race on Friday night, but circumstances conspired against him as the laps were winding down. While everyone was planning on doing two-tire stops with around 20 laps to go to the finish of the race, Harvick reported a vibration, and his team was forced to perform a four-tire stop which took much longer than Dillon’s two-tire effort. While Harvick was reeling in the Bass Pro Shops driver as the race wound down, there just wasn’t enough time, leaving Harvick to think about what could have been.

*Questions You Should be Asking After the Race:*

*1. Why in the heck is KHI bothering to change crew chiefs at this point?*

Kevin Harvick, Incorporated is not going to be competing in the Truck Series next season. It has already been announced that the operations of KHI are being completely shut down after this year, with the Nationwide effort going to RCR and the Truck effort simply shutting down. With seven races to go on the schedule for this season, it makes no sense for Ron Hornaday’s crew chief, who just won last week in Atlanta, to be moved over to Nelson Piquet Jr.’s effort. Anyone who follows racing knows that chemistry is hugely important in the sport, and with these drivers and teams obviously auditioning for other owners in hopes of landing a job going forward, throwing the monkey wrench of new crew chiefs into the mix is just an unnecessary maneuver.

On the plus side, Piquet did run a heck of a race, finishing third and leading five laps. Hornaday’s night was less impressive, with KHI’s senior driver coming home in 10th place without leading a lap or ever being a factor in the event. It is a shame that a four-time champion and the winningest all-time driver in the series is seeing the twilight years of his career is being treated so shabbily.

*2) Why is there not going to be a Truck race at Darlington next season?*

For those people reading this column, it goes without saying that Truck racing is the best racing of the three national touring series whenever they are on the track. With that thought in mind, how can the people at Darlington Raceway not figure out a way to fit a Truck race onto their schedule for next season? It was announced this week that the Nationwide and Cup series will be racing at the oldest superspeedway in NASCAR but the Truck series could not find a date.

This is one sight fans will not see in 2012 as there will not be a Truck Series race at the Track Too Tough to Tame.

While the track claims to have worked with the series to try and figure out a date that would work, you have to wonder how much of this decision is based on economics. The attendance at Truck series races is far smaller than Cup or even Nationwide events, which makes it harder for the promoters and tracks to make a buck when NASCAR still gets a huge sanctioning fee. While the racing at the egg-shaped oval in the South Carolina sandhills is fantastic and almost always provides a very exciting ending, getting enough people to fill the seats to make it economically feasible is hard at a time where the local economy is among the worst in the country. Here’s hoping that, as NASCAR continues to tweak the schedule for the series for the future, they’ll figure out a way to bring a race back to the Lady in Black.

*No. of Rookies in the Race:* 5 Coulter; Kligerman; Paludo; Piquet, Jr.; and Whitt

*Worth Noting/Points Shuffle* Austin Dillon’s win allowed him to gain some ground on James Buescher, the points leader in the Truck series, thanks to Buescher’s 11th-place finish. Dillon also leapfrogged Johnny Sauter who soldiered home to a sixth-place finish and Timothy Peters, who had a long night and ended up crossing the line 17th. Ron Hornaday held steady in fisth, while Matt Crafton’s seventh place finish allowed him to get back past Joey Coulter for sixth in the point standings thanks to Coulter’s 12th place run, which knocked Coulter to seventh spot. Parker Kligerman’s fourth place finish gave him the impetus to climb over Cole Whitt to eighth in the standings. Whitt and defending champion Todd Bodine round out the top 10.

*Steve Arpin had an impressive start to the weekend for Turner Motorsports in the No. 32 truck, putting the car on the pole with a new track record of 175.507 mph. Arpin’s night could have gone better but he did manage to come home with a 16th place finish, one lap down to the leaders.

*Hearing that the Trucks will race twice at Iowa next season with events taking place on July 14th and September 15th. Also hearing serious rumors that Gresham Motorsports Park in Jefferson Georgia could possibly have a date on the 2012 Truck schedule.

*While Germain Racing has told many of their employees that they should start looking for employment for next season, Johnny Benson, former series champion, announced this week that he’ll be returning to the series with Turn One Racing.

*Up Next:* The Camping World Truck series will be on the track in Loudon, New Hampshire next Saturday, September 24th starting at 3:00 PM. Kyle Busch dominated last year’s race, leading 156 laps but had to get by James Buescher with two laps to go to seal the deal. Coverage begins on SPEED at 3:00 PM and can also be heard on your local MRN affiliate starting at 2:45 PM.