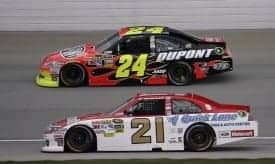 _Monday marked the start of the Chase, and just as expected, the top 12 drivers that have now been set apart from the rest of the field they race in were the talk of the broadcast. In their defense, they were dominant in the finishing order to boot: the top-6 finishers at Chicagoland were all competing for the championship._

_In terms of those chasers, it was a day full of upsets, with Tony Stewart shaking off an ugly regular season campaign to score a long overdue first win of 2011 and Dale Earnhardt, Jr. coming out of nowhere to score his first top-5 finish since Kansas in the spring. But in terms of the actual underdogs of Cup racing, it was a much more subdued day, with scattered success for some and harsh reminders of just how unforgiving this sport is for others._

_In honor of both Brian’s bastard lovechild (read: the Chase) and this column’s new format, Chicago marked the first weekend of a 10-race battle between David and Goliath. Just who came out on top in this week’s edition of how the cookie cutter crumbled? Read on to find out._

*Mike Bliss* and the No. 32 team endured an ugly weekend at Richmond a week ago, suffering through two early race wrecks while carrying local sponsorship en route to an early exit. This weekend, carrying the colors of rapper 50 Cent’s Street Kings energy shot (way to give them a plug, ESPN… and yes, that’s sarcasm), Bliss made up for a lackluster qualifying result by staying off the wall and delivering a 25th-place finish that saw the FAS Lane Racing team outrun Phoenix, Germain, Baldwin, and just about every other camp they’ve been racing with for the majority of 2011. The finish was the first top 25 for the No. 32 and driver since Bliss scored a 25th at Dover way back in May.

*Andy Lally* has one objective in closing out his first full-time season of Cup racing, much less stock car racing in general: keeping the No. 71 team in the top 35 in owner points, a vital tool for any team seeking sponsorship to make it to Daytona in February. With Robby Gordon Motorsports out of money, the only team challenging TRG for that final locked-in spot is Front Row Motorsports, and Monday saw Lally score the win in that battle. While substitute driver J.J. Yeley was running ahead of the No. 71, breezing by in the midsections of the event, it was a matter of a position or two, not the type of points that will allow the No. 38 to catch up. And once Yeley hit the wall with a blown tire on lap 204, it was smooth sailing for Lally from then on out. A 28th-place result allowed the No. 71 to build its owner point cushion further, up to 45 and was a career-best result for Lally on a 1.5-mile circuit.

*Scott Speed’s* 35th-place finish is hardly going to go down as a career highlight, even for a driver with a minimal stock car resume and few prospects of landing a full-time ride for 2012. But Monday saw Speed go the distance behind the wheel of Whitney Motorsports’ No. 46 car, only the fifth time in 2011 that the team has attempted a full race run. More notable for Speed, it was the first Cup race he was running at the finish of this season.

Trevor Bayne was on track Monday at Chicagoland, but was scarcely the presence he had been earlier in the 2011 season: he ran a nondescript 23rd in the race.

*Front Row Motorsports* has enjoyed a mixed bag in 2011. Despite contracting to two full-time teams, the No. 38 car fell out of the top 35 in owner points and faces a steep climb to try to make that deficit up by Homestead, while on the other foot *David Gilliland* has enjoyed the best campaign any of the organization’s teams has ever put together, scoring multiple top 10s including a third in the Daytona 500. That being said, there was nothing mixed about Monday… it was all bad. The woes started during qualifying, when longtime team driver *Travis Kvapil* failed to qualify FRM’s start-and-park No. 55 car. From green to checkers once the race actually started, Gilliland was a complete non-factor, finishing eight laps off the pace in 36th as the lowest finisher not to suffer mechanical failures, crash damage or start-and-park (the team suffered early from a bad ignition box and ran out of fuel late). And while *Yeley* was battling for a spot in the top 35, pushing the No. 38 forward over midway into the event, a blown tire left him with yet another torn up race car and more ground lost to the No. 71 team. Plus, to add insult to injury Yeley was caught pushing Matt Kenseth on the final lap of Monday’s Cup race; that left Kenseth penalized, Yeley embarrassed and people scratching their heads as to the split-second, last-lap decision between two Ford teams to pair up. The final verdict? It’s safe to say FRM ran, not walked, away from the Windy City.

Another organization that got a rude slap-in-the-face from reality was *Tommy Baldwin Racing*, fresh off arguably the strongest showing in team history at Richmond. *Stephen Leicht* went from hero to zero in the matter of a week, failing to qualify the team’s No. 35 car after a stellar return to NASCAR under the lights at RIR. As for *Dave Blaney*, back in his regular No. 36 ride, it was a regular run of TBR struggling on intermediate circuits that have proven to be kryptonite for the fledgling operation. Four laps down in 33rd was all she had this Monday, continuing a disappointing stretch for Blaney that has seen him fail to finish better than 30th driving the No. 36 since Loudon nearly two months ago. Success really is fleeting, especially at this level.

*Josh Wise* start-and-parked the No. 37 car after completing only 41 laps in his Cup debut; Wise had DNQ’d for Cup races in 2009 and 2010 before making the field this weekend. Not only was it a sober reminder of the fall of the No. 37 team from a locked-in car at Daytona back in the early spring – they’re now an entry that’s lucky to make the field some 27 races into 2011 – it was likely a sign of things to come for Wise. Though the journeyman Nationwide development driver has done an admirable job keeping himself in the seat throughout this season, both the uncertain future of Key Motorsports and the loss of the No. 7 seat to Danica Patrick at JR Motorsports leaves clouds over the future of the Riverside, CA native that make the weather seen in Illinois this weekend look tame by comparison.

In 23rd when the checkered flag flew, *Trevor Bayne* was the best-finishing of the bubble drivers at Chicagoland. But this is the same Trevor Bayne that won the Daytona 500 and has scored top-20 finishes on these cookie-cutter ovals before (see Texas twice, Michigan). And this is the same No. 21 team that finished 11th in the Coca-Cola 600. Harsh or not, Bayne’s stock has decidedly dipped since his enormous triumph in February and the illness that soon followed, with a number of wrecks marring his Nationwide campaign and his Cup races since nowhere near as impressive (that Phoenix weekend was just ugly). And now, listening to the Wood Brothers, it seems that Bayne’s future in the No. 21 car is no longer certain, as Nationwide Series points leader Ricky Stenhouse, Jr. (who scored that 11th-place run in the 600) is now being linked to the ride for next year. With David Ragan suddenly seeming more secure in his No. 6 ride, the Cup stable at Roush appears full for 2012… meaning it’s likely the No. 21 or nothing for Bayne next year. And it may well be nothing. Fair or not, February raised the expectations for the talented youngster, and quiet, 23rd-place runs aren’t gonna cut it.

25th, 28th and just thankful to run 400 miles…those aren’t exactly highlights when two of the stronger underdog operations in the sport get utterly smacked down as they did this weekend. Though on an intermediate oval, it wasn’t hard to see such a result coming.