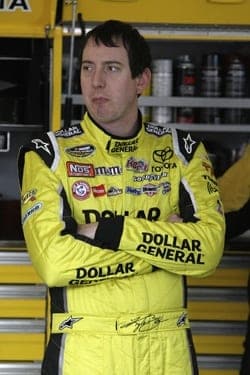 Stop me if you’ve heard this one before: Kyle Busch walks into the Chase, and the car instantly falls apart like Jake and Elwood’s ’74 Dodge Monaco in _The Blues Brothers_.

The trend continued Monday afternoon as Kyle Busch saw an eighth-place finish magically turn into a 22nd-place momentum-killer at Chicagoland Speedway. Busch, who came in tied for first currently finds himself 19 points behind leader and “best friend” Kevin Harvick, a drop of eight positions in the standings. The alternative finish – courtesy of the easy-to-calculate new points system – would have had Busch within five points of the lead heading into New Hampshire, but instead highlights the same struggles the No. 18 has experienced since Busch guided the team to an eight-win season in 2008.

Regular season: Awesome. Chase Races: Everybody forgets how to do everything at exactly the same time. A quick look back at Busch’s Chase resume will find some dents.

*2006:* Qualifies for The Chase in just his second year of full-time Cup competition. Finishes second at Richmond, seeded fourth and building momentum for his first title run.

*Result:* Bounces off of Jeff Green – and the wall – on the first lap at Loudon. Finishes 38th, just one position ahead of teammate Jimmie Johnson. Johnson will eventually rebound and win his first of five (so far) championships. Busch follows it up with a 40th-place finish at Dover, blowing an engine.

Kyle Busch has a knack for falling apart come Chase time each season; at Chicagoland, it was fuel mileage that bit the No. 18 team en route to a 22nd-place finish.

*2007:* Seeded 11th in the field of 12, Busch gets off to a strong start with fourth and fifth-place runs at New Hampshire and Dover. The No. 5 team is strong and no longer appears to be the weak sister R&D team to the 24 and 48.

*Result:* Gets hooked by Dale Earnhardt, Jr. the next week at Kansas early in the going, noses it into the wall. Dale Jr. unknowingly pays for it the next three-and-a-half years.

*2008:* Kyle Busch comes to Joe Gibbs Racing, reviving the No. 18 to the glory days of Bobby Labonte when the mean green machine was a title contender on a consistent basis – winning the championship in 2000. Wins eight of the first 26 races, becomes Toyota’s poster child, and gives plenty of Hendrick haters fuel for the fire that they picked the wrong driver.

*Result:* The No. 18 goes from running roughshod through the regular season to the four-wheeled equivalent of a North Korean space shuttle. Finishes 34th out of the gate at the Magic Mile, mails in a 43rd (i.e., LAST) at Dover with a blown engine, rebounds with a 28th at Kansas, and improves to a 15th at Talladega. Lots of helmet radio wires get ripped out in the process.

*2009:* Does not qualify for The Chase, so naturally posts a top 5 the first race at New Hampshire.

*Result:* The next week at Dover: 31st. Probably for the best he didn’t make it after all.

*2010:* Much like the 2006 season, enters the Chase seeded fourth after a second-place run at Richmond. Posts a solid top 10 in New Hampshire, then a sixth the following week at Dover. Could Busch’s early exit from The Chase demons be exorcised?

*Result:* Maybe someday, but not in Kansas where he ends up a lap down in 21st – courtesy David Reutimann’s temper, temper – and then has a head go Hiroshima in Fontana the next race. Finishes the final four races 25th or worse three times, spiraling out of title contention in style. Of note: One of those was because Kevin Harvick wrecked him on purpose at Homestead. Provides ammo for Darlington demolition derby this May, so I guess all wasn’t lost.

Was there any serious consideration given to 2011 being any different?

To be fair, Kyle Busch did lead for seven laps in the event, but less-than-stellar stops on pit road meant that any semblance of conservation would have to be thrown out the window. A wrinkled front end at a downforce track is never a good sign, and there was the No. 18 with some slabs of Bare Bond on the front end, courtesy some random aluminum debris around mile marker 300. Then, there is the issue of what ultimately cost him a top-10 finish: fuel economy. Busch is the only JGR car to be running the in-house engines while Hamlin and Logano are running the Toyota Racing Development-supplied power plants.

Would a different motor have meant Busch lasted another lap and maintained his position? Possibly; but doubtful. In all fairness, it’s a non-sequitur, but how often will the issue be raised in the coming days and might it become a distraction? If the No. 18 suffers an engine issue in the next few events, you can pretty much bank on it.

That is not to say the No. 18 is mathematically out of the title hunt – not by a long shot. Busch lucked out as other contenders had similar fuel issues on the final lap. Matt Kenseth had MPH all day – but not MPG when it counted, and was relegated to 21st in the running order after receiving last-lap assistance from J.J. Yeley. Not that it mattered; Kenseth would have likely finished there regardless since he was out of fuel for most of the last lap. Odds-on favorite to win his fifth title, Jeff Gordon, had an up and down day that failed to materialize at the end with a 24th-place finish. Busch’s teammate Denny Hamlin was felled by a loose wheel and then a cut tire late in the going as well, ending the day in 31st.

While most of the media are pouncing on this as an opportunity to belt out the popular, _”Now_ we’ll see if the ‘New Kyle’ is for real…” storyline, I beg to differ. I think what we will see now is if Dave Rogers and the No. 18 team are the title contenders they’ve looked to be all season. Slow stops on pit road, lack of track position, and rolling the dice on fuel the first race in is a bit of a head-scratcher for a team that is typically more disciplined in their approach.

Busch has battled everything from embarrassing courtroom capers, to 128 mph speeding tickets, breathing issues at Michigan, and getting lumped up by a 65 year-old man (Happy Birthday today by the way, RC) after a truck race; he can handle the attention and ups and downs that a season in the spotlight can produce.

Those season-high tying four wins that seeded him tied for first with Kevin Harvick (second by tie breakers) provided him with a 12-point lead over eventual race winner Stewart, plus nine points on fourth-place finishing Carl Edwards and tenth-place Jimmie Johnson two days ago. If you don’t think bonus points count for anything under the new system, just watch the next few weeks. If Kyle Busch wins by anything over three points, you’ll know that what he and his crew were able to do the first eight months of the season wasn’t for nothing.

That is, unless an engine lets go or he runs out of gas again on the last lap at Loudon this weekend. At that point, it’ll be too hard and they should just give up and quit.