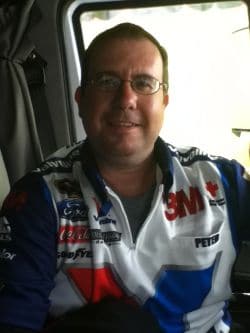 As children and teenagers, we all have dreams as to what we want to be when we grow up. Some want to be professional athletes, while others want to be astronauts, actors, teachers, lawyers, doctors, or musicians.

In the case of Peter Visconti, he wanted to do only one thing from the age of 16 onwards.

“Since the beginning, I always went to Lebanon Valley, and raced go-karts with my dad. Going every week caught me ‘the fever,'” Visconti said. “I was at Lebanon Valley every Saturday night for the first 21 years of my life. My parents and I traveled to multiple races. We went to Dover every other year and stuff like that, so I liked coming down. I said, when I was about 16, ‘I’m going to move to North Carolina and get in racing.'”

The 1991 graduate of Columbia High School in East Greenbush and former Nassau resident did just that after earning a Bachelor’s Degree in Industrial Engineering from Western New England College (WNEC) and working for a few months after graduation in the Albany area. It was most definitely a calculated risk at the time, but the payoff has been great.

Peter Visconti made his dream of working in NASCAR come true with determination, hard work, dedication and a bit of sacrifice along the way. _(Photo courtesy of Phil Allaway.)_

The NASCAR community, both then and now, has a track record of being a “closed” community, much like a family. You have to get your name out there in order to get in the door. However, if you don’t know anyone involved in the sport, it’s easier said than done. You can still do it, but it might be pretty tough. You might have to get lucky… and Visconti did just that.

“I had no job and didn’t know anybody [in North Carolina], so I found a [landlord] that would rent me an apartment for nine months,” Visconti said in Watkins Glen last month. “I had nine months to find a job. I actually started waiting tables at a restaurant that was NASCAR-themed and met a lot of people there. I actually met the President of Todd Bodine’s Fan Club, who was working there part-time as a waitress and she helped to get me in there.”

The next step was something that a lot of people today might not necessarily be willing to do, but Visconti was all for back in 1996. Unpaid labor with race teams; anything just to get yourself out there.

“I started working for free for a couple of teams, just to get my feet wet while I still worked at the restaurant,” Visconti said. “From there, it turned into a full-time position on the weekends, and then a full-time position all the time. I didn’t have a racing background as far as working on [race cars], but they’ll teach you down there. If you want to work for free, they’ll teach you anything you want to know.”

“Anything you want to know” included hanging bodies on race cars, then serving as a general mechanic. Once word got around that Visconti had a Industrial Engineering degree from Western New England College (WNEC), he moved into the parts division, making parts for the cars.

When he first got into NASCAR, Visconti worked for Team 34 Racing, which ran the No. 34 Royal Oak Chevrolet in the Busch Series for Waterloo, NY’s Mike McLaughlin at the time. Later on, Visconti worked for ISM Racing during their brief foray into then-Winston Cup in 1998, following Bodine, who had driven for Team 34 in 1997. Unfortunately, that team garnered the infamous nickname of the “Tabasco Fiasco” as owner Bob Hancher couldn’t really figure out whether he wanted to own a Cup team, or a team in the Indy Racing League (he tried both at the same time, and neither was all that successful). By the end of the season, the organization was broke and had been sold to Tim Beverley; that left Visconti looking for work.

Upon returning to the Busch ranks, Visconti worked for GTS Racing, a now-defunct team that ran the No. 90 Chevrolet sponsored by Syracuse-based Coyne Textile Services and driven by Brad Loney and Mike Stefanik. When GTS Racing folded after the 2000 season, Visconti moved over to Innovative Motorsports and spent four seasons there. A cutback in Innovative’s operations late in 2004 and good word of mouth from a couple of former co-workers led to Visconti moving to his current home at Roush Fenway Racing.

Today, Visconti has two separate positions for Roush Fenway Racing. During the week, he works in the front office and is the Logistics Manager for the sprawling organization. On weekends, he is the tire specialist on Greg Biffle’s No. 16 team.

As Logistics Manager, Visconti is in charge of all of the company-owned vehicles, including the team’s 15 transporters between the Sprint Cup and Nationwide Series, the Grand-Am Continental Tire Sports Car Challenge, and all of their testing haulers. It also includes trip reports, expense dockets and helping the truck drivers with general maintenance.

As a tire specialist, Visconti’s role is essentially to take care of the team’s tires for the entire weekend. Sounds simple, but it’s much more than babysitting some rubber for four days a week. Upon arriving at the track on (typically) Thursday afternoon, Visconti collects the team’s five sets of tires that are allotted for Practice and Qualifying.

There is a certain practice to collecting and then assembling these sets. Every crew chief is a little different. Some crew chiefs like to match tire manufacture dates together so that the tires would be more consistent. Granted, such a difference might only be a couple of days, but it’s an attempt to get any advantage possible. In the case of Watkins Glen, all of the tires used there were manufactured in May. Others try to match tires with similar stagger — the tire’s overall circumference — together. In the past, stagger used to be fairly open and teams would have several different sets of tires in their pit, complete with different stagger settings in order to affect the car’s handling. In fact, it still works this way with tires on dirt track cars, like at Lebanon Valley.

NASCAR made a rule change in the mid-1990’s that made stagger more uniform for all tires, likely in order to save teams from having to buy extraneous ones they would never use. At the time, tires cost roughly $1,200 a set, but you could keep them as long as you wanted. Today, they cost $1,800 a set to lease for a weekend and must be returned to Goodyear before leaving the track. Such a move was designed to actually cut back on testing, however, there is still a slight difference in stagger between some tires. Typically, this is no more than maybe one-sixteenth-of-an-inch, but it can be as much as a quarter-inch at times.

Beyond the picking and massaging of tires, Visconti is also responsible for the inflating (and deflating) of the tires to their proper air pressure after Goodyear mounts them.

Today, Visconti has been involved in NASCAR for nearly 15 years and is very happy in his current dual roles at Roush Fenway Racing. He is very highly regarded inside the race team and is considered to be a very hard worker. But most of all, he stands tall as a strong example that anything can be accomplished with a little hard work and determination.