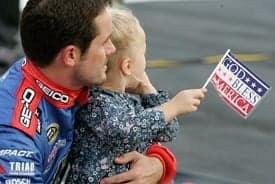 Bristol was for sure a good day for us. I think we ended up finishing a lap down, unfortunately, but the car drove really well. When it comes to the short tracks, it seems like we’ve been really making a lot of progress and getting better. We hung in there all day. We didn’t have a really good starting position, but it was okay. We were fast in practice. It was very, very hot, during the heat of the day, and obviously, the race goes into the night and everything cools down. It came to us, and we had a pretty good racecar all night.

Atlanta was okay. Honestly, we really, really struggled throughout that whole weekend. I had a really loose racecar, and I couldn’t get in the corners for the whole weekend-practice, qualifying, even on race day. There were a lot of cautions, and fortunately, we came out of there unscathed, but with a pretty mediocre finish. The mile-and-a-half tracks have been tricky for us this year. There’s definitely more emphasis on the cars there. When you come to the short tracks, you can kind of manipulate things more as a driver. On the mile-and-a-half tracks, you’re just in the corner for so long and in the gas for so long down the straightaway that you’ve got to have some good downforce and good horsepower. Our team continues to grow and get better. We’ve got a couple of built-in disadvantages that we’ve been trying to work around all season, and when we get to those mile-and-a-halfs, it just seems to be a little bit more difficult for us.

I don’t know that a rain delay changes my focus at all. As soon as you find out that it’s raining and it’s going to be scheduled for another day, only the time changes. Obviously, when you’re gearing up that morning to go racing and then you don’t, it changes things for you, but when you realize that it’s going to be done at a different time, you just focus on that time instead. You’ve got to take into consideration any track changes, or the time of day of the race and how that’s going to affect the track and how it might affect your racecar, but really, we shut it off and turn it on once a week, so doing it a day or two later doesn’t make a whole lot of difference to us. Logistics do get a little tight, sometimes.

Amidst the patriotism exuded during the 10th anniversary of 9/11 weekend at Richmond, Mears and his No. 13 team enjoyed a solid run.

Richmond was really good. Our car drove really well. Unfortunately, I got in that first incident on lap 8 when Bowyer and the [No.] 00 got together and we ended up getting pushed into the back of the [No.] 88 by Martin Truex, Jr. Fortunately, we didn’t get too much damage, and the damage that we did have, the guys did a great job of repairing. We did have a little bit of an overheating issue there for a little while, because when I got hit in the right front, it broke some of the ductwork just behind the nose between the radiator and the front end, and that made it not cool as efficiently.

For a while there, we really had an overheating issue, but it kind of straightened itself out and got better throughout the race. We had a good day. The car drove well. It was good. We stayed on the lead lap all day and had a solid day and a solid finish. I think when you really look at the short tracks, you’ll see the progress of our team. The guys are a good group of guys. The core group of our team is getting better and learning and growing. Again, when we get to the mile-and-a-halfs, we end up struggling a little bit.

We had a busy weekend in Chicago! I had a lot of appearances, and it was great to have all the GEICO guys come out. That was really cool. It was unfortunate that it was rain-delayed and those guys had to sit through some rocky weather, but it was really cool to see those guys step up and sponsor an event. It seems like over the years, they’ve gotten more and more involved in NASCAR and in our program. It was really cool to have a home event for them.

The car just didn’t have the speed that we needed. We were just kind of off for the whole weekend in the balance, and we just couldn’t find the speed. Unfortunately, it was a big weekend and we just didn’t have the car to run well. The reason why we’re always having bad timing with the cautions coming out right after we pitted was we were trying to do some tricks to try and get a good finish out of what was a difficult weekend. It was okay. We’ve got some tracks coming up where hopefully we can put something good together.

I absolutely enjoy meeting my fans. I have a really great core group of fans who have stuck with me through a lot of years. It is fun, and I don’t mind going out and signing autographs for everybody. It’s good to kind of catch up with people. It was fun. We had a lot going on that weekend, and it went well.

Our team has been gaining as a company. We’re gaining momentum as far as Bootie and I learning each other. As a whole, the company is really understanding where it needs to go to improve. I think a lot of the gains that we’ve made throughout the year haven’t necessarily been just in trying to find speed, but more in what we’re actually going to do when we find that speed. We’re pretty clear on what we need to do to be faster. At the end of the day, it’s like a lot of other teams: we need more power and we have to build better racecars, but it’s one thing at a time. Because we’re a small organization, we just need to get through this year as best as we can and really start focusing on what we’re going to do for next year.

Jimmie [Johnson] is a good friend of mine. He’s been a good sounding board through a lot of this, just trying to figure out where we’re going to go. He knows and understands a lot of things that I do within the team to try to help it move and grow forward, so it was really cool to hear him call me the most underrated driver in NASCAR. Jimmie’s a good guy. It was really cool of him to make those comments. I think he really understands how hard we’re working to do what we do each week, and it was really cool that he realizes that and thinks that way.