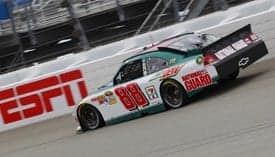 *Are any drivers ‘eliminated’ after Chicagoland?*

With perhaps one of the deepest Chase fields since the inception of the ten-race playoff, if there is one driver that you can write off as having absolutely, positively no shot at winning the Sprint Cup after just one race it’s Denny Hamlin. He’s not mathematically eliminated by any means, but with just ten top 10s and one win this season, it would be near impossible for the No. 11 team to make any late-season surge that could overcome that 31st place finish at Chicagoland last weekend. In the midst of the worst year of his career, Hamlin was slowly building momentum with three consecutive top 10s leading up to the Chase, but was a non-factor all weekend at the Chase opener.

Now, 41 points out of first and a stunning 16 points out of the 11th position, it’s safe to say that it is now an eleven driver fight for the championship. But while it’s safe to write Hamlin off as a threat for the championship, he does have a chance to race his way out of the cellar. With an average finish a tick under eighth in his career at New Hampshire he has a chance this weekend to eat into the deficit between he and his closest competitors.

*Does Dale Earnhardt Jr. now have a chance to win the title?*

A surprising run for Dale Jr. at Chicago was a shot in the arm for Jr. Nation, but shouldn’t be considered a sign of a miracle title run to come.

Heading into the ten-race Chase it was hard to find any signs of optimism coming out of the No. 88 camp. Dale Earnhardt Jr. had scored just one top 10 finish since Daytona in July and narrowly raced his way into the Chase. Suddenly, with a third place finish at Chicagoland to kick off the Chase, Earnhardt Jr. finds himself fifth in points, just 13 points out of the lead. It’s been enough to spark some excitement among Junior Nation, who has already enjoyed Earnhardt’s career resurgence this season.

But to think of Earnhardt Jr. as a championship contender after one top 5 finish is a bit premature. Much like the aforementioned Denny Hamlin, Earnhardt Jr. hasn’t exactly had the type of season that would lead one to think he can flip a switch and suddenly start rattling off consistent top 10 finishes. But this is still a great start to the final ten races and even if Earnhardt doesn’t win the championship it’s been a great rebound for NASCAR’s most popular driver. It’s been a streaky season for the No. 88 team, and if they can turn this stretch into one similar to the one that found them as high as third in the standings earlier this year, a top 5 points finish is not out of the contention.

*How will the new plate changes affect racing at Talladega?*

As if Talladega wasn’t already the wild card of the Chase, the new restrictor plate rules are bound to make the lone superspeedway race in the final ten races a wild one. Determined to break up the two-car draft that has infuriated fans and drivers alike, NASCAR has increased the size of the restrictor plate by 1/64 of an inch and recalibrated the pressure relief valve. The two changes are expected to increase speeds three to four miles per hour and dramatically decrease the amount of times cars can push one another, possibly to as low as one lap.

It’s a very promising change and one that fans who have been clamoring for faster speeds and more competitive racing are excited over. If all goes as planned, you should see more of the pack racing that has been most commonly associated with plate racing over the years, with the two-car tandem being used in the race’s final laps. But while the racing may be more exciting, it’s an added twist for those 12 teams vying for the title. Back will be the unpredictability of pack racing, with the added danger of two-car tandem drafting. As is always the case, Talladega will be anybody’s race, but this latest change also allows the one team that figures out to use the two-car draft more than anybody else a big advantage.

*Who will be the biggest mover in Week 2 of the Chase?*

Tony Stewart shocked the field with a win at Chicagoland last weekend, moving from ninth to second in points, but it’s his teammate who has the possibly to accomplish the same feat in week 2. Ryan Newman is one of the strongest drivers at New Hampshire, claiming his first win at the one-mile track and winning there earlier this season. Newman has three wins and 13 top 10 finishes at New Hampshire, and you better believe that there is a lot of momentum right now throughout the Stewart-Haas organization.

The No. 39 team sits seventh in points at this moment, just 14 points out of first, but don’t be surprised to see Newman in the top 3 when all is said and done Sunday. The same type of jump can be made by the man one spot behind Newman, Jimmie Johnson. If Johnson is to contend for this championship, this is the type of race he needs to win. He’s had success at the Magic Mile in the past (three wins, 13 top 10s) and he and crew chief Chad Knaus are determined to eat into their 16 point deficit behind points leader Kevin Harvick. Don’t be surprised to see Johnson and Newman battling it out for the win Sunday afternoon.