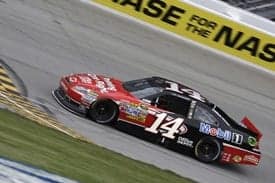 Monday’s rain-delayed race at Chicagoland Speedway wasn’t decided so much by drivers racing each other as it was by them racing the inevitable. Instead of viewers being left to wonder if one man was fast enough to pass another, the question was more about who could simply get to the checkered flag without running out of fuel. Radio chatter was less about what line might be the best one to use to catch the next position and more about how much the driver should back out to save fuel. Yes, it was the dreaded fuel-mileage race rearing its head.

And in general, that’s perfectly fine.

Fuel mileage is one thing that teams have to figure into their race strategy. Not pitting for fuel when the car could be a lap or two short is a gamble. Pitting when it’s that close is suicide. The finish becomes a nailbiter as fans wonder if _their_ driver can make it, and many a race fan is left to look on in frustration as the car they were pulling for does that little wiggle as the driver tries to find a few drops of fuel and then slows, coasting home as others fly past at speed. To be on that end as a fan has got to be a devastating feeling as the driver, totally helpless, moves in slow motion toward the agony of defeat. On the other side, of course, is the driver who seemingly defeats all laws of physics and roars to the checkered flag, maybe even with enough left in the tank for a round of burnouts and celebration.

It’s all part of the game. Every team is in the same boat, forced to make that gamble, even knowing it won’t pay off. And sometimes it does pay off, often even to the surprise of the team, who wasn’t telling their driver that he should have run out two laps ago. Fuel mileage is a strategy game, no different than making that key adjustment for speed in the last run of the day, no different than finding an advantage on pit road under caution, no different than knowing when a well-timed and well-placed bumper means the difference between victory lane or second place. It’s all part of the game.

Tony Stewart didn’t win the Chicagoland race by mashing the throttle on Monday, but he still was the legitimate winner of the 400-miler that opened the Chase.

Drivers who win on mileage don’t deserve an asterisk next to their name any more than those who use the bump and run to win. On that day, at that track, a driver who can make the fuel gamble work out better than anyone else deserves to win. Period. At least a mileage win is exciting, even if it’s also frustrating, even if it’s not on the same level as a bumping, grinding, side-by-side drag race from turn 4 to the stripe. It’s certainly more exciting than watching a driver coast home by five seconds or more, knowing for the last 20 laps that nothing barring disaster will change the outcome. It’s better than a set-up caution flag for nonexistent debris, just to make things interesting. (While those races might be interesting, they are also fake.) In short, mileage racing is an integral part of the sport that can decide the winners and losers any given week.

As much as fuel mileage can play the hero or the spoiler for any given race, though, it should never be the deciding factor in a championship.

Maybe that’s a bit of a double standard. After all, mileage does win races. Mileage is a strategy game, just as being in the right place to capitalize on it is a strategy. A few races are going to be decided by it every year, there’s no getting around that.

However, there’s a thing about fuel mileage: the faster you’re going, the less of it you are going to get. That means that the drivers who have the fastest cars for most of event may well be unable to compete at the end simply because they can’t utilize the speed, and the strategy the team used to find it. When Lightning McQueen learns that sometimes you have to slow down to go faster, that didn’t mean all the time, and it didn’t mean backing off by a tenth or a half of a second every lap just to make it to the end. That’s strategizing, but it isn’t racing.

Yet, by virtue of a schedule top-heavy with tracks where mileage races are likely, NASCAR has set up the Chase for that very possibility: that a champion will be made by taking it easy while the drivers around him race as hard as they can, only to come up a lap short in the tank. Is that really what fans want the champion of the sport to be remembered for?

Five Chase tracks-Chicagoland, Kansas, Charlotte, Texas, and Homestead-Miami-have a great potential to be decided on mileage. That’s a full half of the races which ultimately decide which name will go down in the history books as the best of the best. Those five tracks have all seen winners decided on fuel or fumes, and the flat miles, New Hampshire and Phoenix, have a smaller likelihood of this, but still a possibility. If both Phoenix and Loudon are decided on the track, without mileage in the equation, along with Dover and Martinsville, where mileage racing is generally not an issue, that potentially makes four of ten tracks where the race is decided purely on speed and skill. Talladega will almost certainly not be decided by mileage, but between rule changes and the nature of restrictor plate racing, the race is little more than a crapshoot on any given day without fuel playing into that.

What that means is that there is a high possibility that 50% of championship races will be decided by fuel mileage. While winning on mileage doesn’t mean a cheaper victory, it could mean a cheaper championship. A win is created by the best strategy on any given Sunday, coupled with a little luck. A championship, though, is, or should be, created by outracing the competition week in and week out, if not winning, then by capitalizing on others’ mistakes and making your own luck. It’s decided by horsepower and prowess, by determination and grit and wanting it more than anyone else. Cruising around a half-second slower than the rest of the field with fewer horses under the hood and making no attempt to pass can put a driver in victory lane, and rightfully so. But these things do not, should not, a champion make.

In the end, when the smoke clears and one team stands alone at the top, that team should have gotten there on many different strengths, even knowing how to make fuel last an impossibly long time. But they should also be there because they raced the hardest, took the most and the best chances, played the entire game better than anyone else. Mileage racing isn’t the whole game. It’s certainly not the game a true champion wants to be most remembered for.

Yet it’s the game NASCAR sets the Chase field up to play in the final ten races. The fix-changing the Chase schedule to include a road course and another short track, such as Richmond, while eliminating at least two cookie cutters-is simple. Instead, NASCAR sets itself for failure: races decided either by fuel mileage, or worse, decided by cautions brought out by invisible debris on the track or by the teammates of desperate drivers. While such speed bumps should play a part in shaping a champion, they shouldn’t play the starring role. That should come from the driver himself, and the team around him, not out of the gas tank.