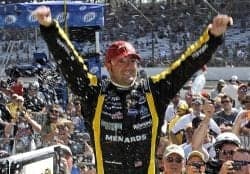 Alfred Jackson e-mails, *“Okay, as an old (I mean experienced) official, what’s your take on the alleged “deliberate” spin at Atlanta by Paul Menard to cause a caution for his teammate, Kevin Harvick?”*

Alfred, first, I don’t object to being called “old.” I’ll be 73 this Saturday. That’s old. Now to the question — my first reaction when it happened was that it could indeed have been deliberate. After hearing the radio transmission (“We don’t need a yellow,” then telling Paul to go to the encrypted channel) I had to wonder.

I didn’t wonder about whether it was deliberate. I wondered just how smart those guys were. Why weren’t they on the encrypted frequency to begin with? Or, at least, why didn’t they have a code phrase for this situation? In the past and on this Web site, I’ve owned up to tossing a green flag when we needed one to spice up the competition in the original ASA. We had a two-step code phrase worked out. Rex Robbins would call me, then a minute later the second phrase meant I had to find a reason to throw a yellow.

The only time I was really worried about being caught was one time at Atlanta, and that’s the story I told here and in the book. The reason was that it was a companion race with CART and we were using their safety trucks.

Luckily, after I said I saw something bouncing around in the third turn, the safety workers found a torn tie-down strip up there. It was shown to me after the race, and the comment made that I had terrific eyesight. I told them that’s why I took a pair of binoculars up there with me.

Back to the situation of a teammate causing a caution, this isn’t a new thing.

Another story I’ve told before involved me questioning a “lesser funded” team about how they managed to keep going back in the ’60s. They said the big teams often passed down slightly used engines and other pieces when they needed them.

It’s been a career year for Paul Menard, but a recent controversial spin has dominated the headlines.

I asked what the “big” teams got out of it, and the somewhat cryptic reply was, “Well, they always seem to get a caution when they need one.”

We made use of this philosophy on the K&K team once, not by passing down parts, but by staying out for an extra lap or two after everyone had pitted under green because one of the top-line Ford guys hadn’t come in yet. We knew he needed fuel and tires as much as we did.

Sure enough, one of those “lesser funded” guys spun and we both got to make our stop under yellow. Well, that’s my take on the situation. And, as NASCAR stated, short of an outright admission that it happened deliberately, there’s nothing they can do about it.

I’m sure everybody recalls Junior a couple of years back, when asked what happened to cause him to spin, saying, “I needed a caution flag.”

And yes, he did get penalized.

On Sunday night, I heard Dave Despain mention that he had been told by someone that they once heard Mario Andretti ask “Does Michael need a yellow?” at Indianapolis. I know that’s second hand, and I didn’t hear it myself, but the guy sitting next to me in Grandstand B told me that’s what he heard right after he heard it.

Mario didn’t do anything to cause a yellow, but I remember remarking at the time that him slowing down and parking just off the track wouldn’t have been considered unusual in that period of time. As a matter of fact, Mario’s luck at the Brickyard gave rise to the joke that “Gentlemen, start your engines,” had been replaced as the four most famous words in motorsports by “Mario is slowing down.”

May I take the time and space right now to comment on a situation that bugs me just a little?

I get tired of the TV commentators, when the term “cookie-cutter” track comes up, going to great lengths to explain that this track or that track is completely different from another. Alright, I understand that there are quirks and peculiarities specific to each track when it comes to driving them, setting up a car, etc. When they built Ontario Motor Speedway as a twin to Indianapolis, it had its own quirks and peculiarities.

But to the fans, most of them are all still 1.5-mile tri-ovals, except for Charlotte and Atlanta, which are quad-ovals. They look the same, and that makes them “cookie-cutter” tracks as far as I’m concerned.

We need some variety. I know they had reasons for changing Atlanta, but I liked it as one of the few “true” ovals left. Why do I mention the fans? Because they are those who pay the freight, in one way or another – either through purchasing tickets, or patronizing the sponsors who put in the big money.

Let’s face it, if Sunoco’s participation in NASCAR doesn’t help sell gasoline, they’re not going to be participating very long.