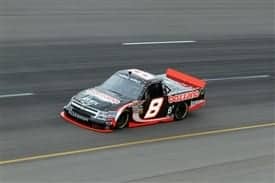 With just seven races remaining on the Camping World Truck Series schedule, Kyle Busch Motorsports is set to debut another driver: German Quiroga. The 31-year-old will pilot the No. 51 Telcel Toyota Tundra in a one-race deal for the F.W. Webb 175 this weekend at New Hampshire Motor Speedway. Earlier this week, he spent time with the team getting fitted for the truck.

“On Monday we [spent] almost all day with the engineers and mechanics who [work with] Kyle Busch’s truck team to make the necessary adjustments to the seat, pedals and safety of the two trucks that are at our disposal,” Quiroga said.

This weekend’s race will serve as a test session for the two-time champion to determine whether he’s interested in continuing in the series in the future.

Nelson Piquet Jr. is one of a number of foreign regulars hustling trucks around ovals across the U.S. German Quiroga will add his name to that list at Loudon on Saturday.

“Over the last few years, German has established himself as the premier driver in the NASCAR Mexico Series by winning races and capturing back-to-back championships. This one-race deal is an opportunity for him to test the waters in the Truck Series and evaluate if driving in this series full-time is something he would like to pursue,” KBM General Manager Rick Ren said. “The strong international presence we currently have in the Truck Series with Max Papis, Miguel Paludo and Nelson Piquet, Jr. is a major reason that our fan base continues to grow and our television rating continue to increase. Adding German to the mix would be great for this series and we look forward to providing him with a positive experience on and off the track this weekend.”

Despite the unfamiliarity of the field he’s joining this weekend, Quiroga is optimistic about the opportunities KBM can open up for him with the one-race deal.

“I’m excited about the opportunity to represent Telcel, my fellow Mexicans and all of Latin America driving for Kyle Busch Motorsports in the NASCAR Camping World Truck Series at New Hampshire Motor Speedway,” Quiroga said. “I want to thank God for this opportunity, my family for their loving support and Carlos Slim and Jimmy Morales for believing in me the last five years. I have worked hard to win two championships and achieve a successful career racing in the NASCAR Mexico Series and promise to work harder than ever to assure that my success continues as I strive to achieve new goals.”

“I believe that to continue my growth as a professional driver, the logical next step is to explore opportunities to drive NASCAR in the United States and I hope that this weekend’s race is just the beginning of a long and prosperous relationship with Kyle Busch Motorsports.”

In 10 starts so far this season, Quiroga has one win, two poles and five runner-up finishes. In 88 overall starts, Quiroga boasts 15 wins (second all-time in the series), 55 top 5s and 68 top 10 finishes. He’s also won the championship the last two seasons and currently holds a 110-point lead in this year’s standings with four races left to run. The 31-year-old has a lone Nationwide Series start in 2007; he started 20th, led eight laps and finished 28th in the Telcel-Motorola Mexico 200 at the Autodromo Hermanos Rodriguez road course in Mexico City.

Quiroga joins Kimi Raikkonen and Josh Richards as champion drivers who have made their Truck Series debuts behind the wheel of a KBM Toyota.

“New Hampshire is tricky. It’s a really tough place to qualify. You’re always fighting for grip. For me, it almost feels like an overgrown Martinsville. You have to get as much as you can out of the tire without over driving the truck. In race trim, you have to be able to roll through the center of the corner to be really good and get good grip up off the corner. If you can keep the truck turning, you’ll be in good shape.” _Ricky Carmichael_

“I really like Loudon. I’ve got three wins there, and it’s a track where you will have a lot of side-by-side racing. That always put on a great show for the fans. You’ve really got to have the whole package at this race track to come through the field. Track position is critical, so hopefully we will have a fast Cooked Perfect Meatballs Chevrolet in qualifying and be able to start up front.” _Ron Hornaday, Jr._

This weekend, Sacred Power Motorsports will make its Camping World Truck Series debut with driver A.J. Russell. The team will make history, marking the first Native American owned team partnered with a Native American driver. Russell, who started racing at the ripe young age of seven, is a Cherokee Nation Member in Oklahoma and looks forward to his first truck series start.

“I’ve been told just to stay on the lead lap and keep my nose clean. I obviously have different expectations. I go to races to win, so obviously I’m going to be looking for that. I’m not gonna be happy unless I’m sitting in the top 10.”

The team has worked for more than a year in preparation for their debut, lining up partners like Georgia Pacific Professional, Multi-Flow Beverages, Pocket Rocket Water, Phantom EFX, Wrestling Superstars Live, Southern Pan Serives and Don Rico Beverages. The team’s goal is to get their sponsor’s products featured in the 289 Indian Casinos located throughout the United States.

David Melton, team owner and owner of the largest Native American owned solar company in the United States is a member of the Pueblo of Laguna tribe in New Mexico.

_(Author’s Note: If you’ve set your DVR to catch the F.W. Webb 175 at New Hampshire Motor Speedway this weekend, keep an eye on the weather forecast. The Weather Channel is currently forecasting a 60 percent chance of showers throughout the day on Saturday. You can follow me on “Twitter”:http://twitter.com/beth_frntstrtch for updates on the weather as race time rolls around.)_