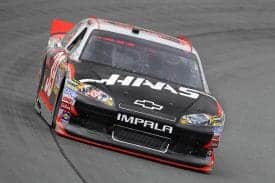 Every pro athlete knows a little something about pressure.

There’s the pressure to perform, to do wondrous things on the court of choice, lead your team to victory, not screw it up. In basketball, baseball and hockey, there are seven-game final series where, if you lose one or even two games, all is not lost.

But that’s not the case in the Chase for the NASCAR Sprint Cup.

Take Denny Hamlin, for instance. A 31st-place run at Chicagoland put him in go-or-go-home territory. A 29th at New Hampshire put him in the Chase basement, perhaps to stay.

After Sunday’s race at New Hampshire, Hamlin sits 66 points in arrears of Tony Stewart, the championship leader. That’s a large gap, to say the least in a system where the most points you can gain on a driver per race is 47. To make it up, now Hamlin will have to have a conflagration of cosmic proportions among the top 11 or a massive outbreak of points-chopping penalties.

That’s not going to happen, not en masse. So Hamlin, two weeks into the most important 10-week stretch in his area of expertise, will spend the remaining eight weeks working for 2012. Whether that entails a realignment of his team or other similar changes remains to be seen, but adjustments _will_ happen by next season. Count on that.

Ryan Newman’s car won the pole but struggled late in Sunday’s Sprint Cup race. A flat tire at Loudon left him out of victory contention and already on the ropes in Week 2 of this year’s ten-week Chase to the series title.

It’s easy to forget this driver, paired with this team took a lead into the final race of the season in 2010 and ended up losing to Jimmie Johnson. The Virginian was one race away from being Denny Hamlin, NASCAR Sprint Cup Champion, not just Denny Hamlin, driver of the No. 11 FedEx Toyota.

Ryan Newman is, all of a sudden, right down there with Hamlin too – near the bottom of the pack after just two races. He won the pole for the Sylvania 300 and ran in the top 10 or 15 all day long until a flat tire a few laps from the end killed his chances and put him 25th in the final rundown.

He’s now 34 points out of the lead, held by his teammate, and that’s a bunch of points to make up. At least it’s doable without divine intervention or rampant lawlessness on the part of championship-caliber crew chiefs, though.

Each year, we’re prepared for these early elimination endings. Such swings of fortune are not unusual in NASCAR’s run to the roses, although rarely do they happen so quickly and so… finally, in the case of Hamlin. The pressure, especially in a wide-open playoff like this year’s has deepened the consequences of any mistake.

So who’s next? Anyone. Stewart says that, while the first two weeks have gone as well as they can for him and his team, it can swing the other way just as quickly.

“The reality of it is you look at guys that are in the back half of the Chase, they’re guys that a lot of people expected to be in the top five, top three in the points right now,” he said Sunday. “It shows that one or two bad days can put you in a bad spot pretty quick.”

“I’m proud of our group. I’m confident that we’ve got a group of guys that are very, very focused right now. Like we said, the cars don’t know anything about momentum, but the people do. This is the perfect scenario to go into these last eight weeks, for sure.”

In other words, Stewart knows to be wary of success – it can be fleeting. In the first 26 races of the season, he was competitive early, and again in the last two races before the Chase field was decided. In between, however, he couldn’t find a fast car or a good break with a miner’s helmet and a GPS.

Tony Stewart’s team responded to the pressure to show themselves worthy of winning the championship after the boss called them out for poor performance… but can they keep it up?

“It was one of those where we kind of had no idea,” said crew chief Darian Grubb on the slump. “We had a really good start to the year, had good race cars, fast race cars, chances to win, strategies to win, [yet] got beat over and over and over. It beat us down.”

“Middle of the year we couldn’t hit on anything that made it better. Rode the same, didn’t have feedback or anything that was positive. Everything was just kind of there. The last few weeks, we started getting better. I think it was the same time at Michigan that Tony said we weren’t Chase contenders even if we made the Chase. I think everybody started taking an extra load, working harder, getting faster.”

Sometimes, that’s all it takes. When Stewart said that he didn’t deserve a spot in the Chase, even if he made it in, that put some steel in the spines of guys like car chief Jeff Meendering, tire changer Ira Jo Hussey, and Grubb. That’s pressure, when your team owner calls you out on national TV, even if he was calling himself out as well.

Grubb and his guys, still working with a transition at Competition Director (Bobby Hutchens was released this summer) responded like champs. Pressure does funny things to people. In some, it makes them shine. In others, they freeze solid. Champions endure it, overcome it, turn it to good.

“It happened in a week,” Stewart said. “We went from five laps down at Bristol to running third at Atlanta the next week. No, you don’t see it coming. It’s not like we say, ‘OK, this is what happened, this is what’s wrong, this is what you have to do to fix it.’”

The spark has been lit virtually ever since, this team building towards the success of two straight victories at the Cup level. And as each week passes, the confidence within SHR grows that this young, two-car operation can compete for that championship.

“Momentum deals with people. It’s not just these first two races of the Chase, it was the two weeks leading before it, too. We haven’t finished outside the top seven now in the last four weeks. That’s huge for us. It’s huge for our guys.”

It’s important to note that during this stretch, Stewart has worked his way through the pack while fighting through handling adversity. That’s a big step, starting 26th at Chicagoland and charging up through when in other races this season, he’d stall, get stuck in midpack and be left without a lifeline to the front.

Well, he hasn’t missed so far in the Chase, even with all the pressure Smoke’s under as the point leader and having to defend it.

“The potential’s been there all year,” he said. “You wonder when the bad luck string is going to stop. You hope, like I said, [good luck] happens another eight weeks now. We hope we’re through it and we can keep clicking off top fives, 10s. If we could get a couple more wins, that would be awesome.”

“The thing about this sport is things change week to week. The one thing I think our organization is really good at is taking what we’re doing day-to-day. I mean, we don’t lose sight of where we’re at today worrying about two weeks down the road. We focus one day at a time.”

Should Stewart ever lose sight of that, despite the proven track record he needs to look no further than across the shop at Newman’s No. 39. One team is sitting first in points… the other? A distant 11th.

But in this pressure-packed Chase, only one bad race is all it takes to flip-flop those positions around.