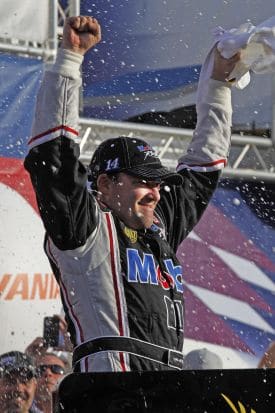 The Key Moment – With two laps to go Clint Bowyer ran out of fuel, handing the lead and the win to Tony Stewart.

In a Nutshell – Turnabout is fair play. Last fall, Stewart ran out of gas heading to the white flag at NHMS and Bowyer was able to capitalize on the error to take a win.

Dramatic Moment – Well, if you like watching people run out of gas you must be orgasmic after the last two races.

Is fuel mileage racing going to kill NASCAR? You could make a valid argument that you can’t kill what’s already dead.

Are further penalties in store for Kurt Busch and the No. 22 team this week after the car failed pre-race inspection Sunday? (The rear differential was apparently skewed to one side.) Recall a hefty points penalty on NHMS winner Bowyer for a similar infraction (being outside tolerance) basically ended his chances in the Chase last year. When Mike Helton walks to the spotter’s stand to talk to a team owner prior to the race, that’s an ominous sign. Editor’s Note: Bob Pockrass from SceneDaily is reporting Cup Series Director John Darby has nixed any idea of additional penalties for the team.

I sure hope there’s no substance to the rumor that due to sponsorship issues Bowyer will be moving from RCR to Michael Waltrip Racing, where careers go to die, next year. Metaphorically, drivers’ careers are like flowers. They need sunshine to grow. And nothing can survive in the massive shadow of MWR’s titular owner’s massive shadow.

Remember way back when when Bruton Smith and SMI bought the New Hampshire track from the Bahre family? Smith promised a major upgrade to the track configuration that would leave NHMS basically a 1-mile replica of Richmond, one of the great tracks on the circuit. So what happened? Was all that money spent doing parking lot improvements at Kentucky prior to that track’s inaugural race?

Hopefully, everyone caught Saturday’s Whelen Modified race. Lots of passing and multi-groove racing at NHMS? What’s up with that? Here’s a hint: look at the width of the tires on the mods. Wider tires in Cup would also provide for better racing. (Particularly if they were bias ply tires.)

Ummm… let’s see. NASCAR’s first two Chase dates are held at Chicagoland and New Hampshire, a pair of tracks not known for scintillating action. Combined with a rainout (can’t blame NASCAR for that one) and two fuel mileage races, that ought to kill off whatever nascent interest there was in this year’s playoffs among casual and non-fans.

Speaking of which, I want to talk to the programming genius at ESPN/ABC who decided on a 2:15 ET start time for stock car races. It seems odd to give fans an hour and 15 minutes to get into the NFL games (scheduled to start at 1 p.m. ET and the pigskin is flying minutes after one) when the NFL is already the ratings king. I thought the trick was to have fans surf by the football game during race broadcast commercials, right? Not the other way around. And if a TV network schedules a race to begin at two, when fans tune in at two sharp the cars ought to be rolling off pit road to begin the parade laps.

So where did I get off to? Longtime readers will remember I blew out my left knee back in 1996. Well, I now have a matched pair of bum knees to deal with, putting me in intensive care again during the earthquake and Hurricane Irene. I’m not sure where the rumors I had cancer or was dead started, but despite a lifetime of bad habits, hard living and the diet of a buzzard unfortunately for my detractors I’m not checking out anytime soon; I just won’t be able to beat any of you in a foot race for awhile. Thanks to all who emailed me good wishes during my convalescence…

Bowyer almost won the race but came up two laps short on gas. That dropped him all the way down to 26th at the checkered; in comparison, last fall Stewart went from the lead down to 24th while Bowyer jumped up to win the race.

Dale Earnhardt Jr. ran in or around the top 10 all day until a pair of blown tires ruined his afternoon. Camber issues were reportedly the cause while the result was a disappointing 17th.

Mark Martin’s best run in ages was also spoiled by an equalized tire late in the race. Martin, who was despondent for a bit on the radio (and who could blame him, the way this season has gone) wound up 24th.

Jimmie Johnson dropped positions like a rock after tangling with Kyle Busch and bending up his steering system. The No. 48 team, whose radio chatter was testy at times throughout struggled to end the day 18th.

Denny Hamlin ran out of gas with six laps to go and fell from sixth to 29th in the running order. Stick a fork in his title hopes because they are well and truly done.

For the second straight week, Stewart basically had a victory fall into his lap. The only laps Smoke led were the final two once Bowyer’s tank ran dry.

Brad Keselowski spent the first half of the race in Nowheresville, population him, until clever pit strategy garnered him some track position and a second-place finish. In comparison, teammate Kurt Busch was experiencing another mental breakdown en route to 22nd… weirdly enough, both Penske racer’s finishes matched their car numbers.

Matt Kenseth’s afternoon seemed doomed after he was spun by teammate Carl Edwards. But Kenseth recovered well enough to finish sixth, on the lead lap and ironically enough two positions ahead of Edwards. It’s the best result he’s managed at the Magic Mile in over five years.

Jeff Gordon rebounded from a horrid run at Joliet last week to lead the most laps and finish fourth at New Hampshire. And the No. 24 car didn’t even run out of gas this time!

Brian Vickers had a strong run and was finally able to capitalize on it with a respectable fifth-place finish. It served as a silver lining on a week Red Bull Racing officially notified the state of North Carolina the team will close its doors in December without a sale.

Jack Roush had a pretty good weekend, with all four of his teams finishing inside the top 10.

Stewart takes over the point lead, displacing Kevin Harvick to second in the standings. (I haven’t quite figured this Chase mess out yet, but I think winning the race still pays the maximum amount of points so that makes sense.) The gap between the two drivers is now seven. Keselowski, a decided sleeper in the Chase despite a productive fall, moves up three spots to third in the standings; he’s 11 points out of the lead. Edwards, the highest of the Roush Fenway crowd sits in fourth; he’s 14 markers behind.

The four-time champ, Gordon moved up six spots in the standings to fifth, while Kyle Busch moved up five spots to sixth. The bad news for the duo is they are now 23 and 26 points out of the lead, respectively. Both have to hope the law of averages catches up with Stewart, somewhere during the next eight weeks or their championship hopes are pretty much toast.

Kurt Busch had the worst points day, falling five positions to ninth in the standings. A further NASCAR penalty for this morning’s pre-race infraction could really ice his cake. Other big losers: Ryan Newman fell four spots to 11th in the standings, while Earnhardt Jr. fell three spots to eighth. Somewhere in Connecticut, they’re talking ESPN executives down off of rooftop ledges.

Those we haven’t talked about yet: Kenseth, who sits seventh after some tiebreakers and Johnson, 10th in points and 29 out of the lead. Hamlin, still dead last is now 66 markers back and all but eliminated from title contention.

Bowyer, while losing the race still has a three-point edge over Biffle in the “Best of the Rest” battle hidden behind the Chase.

Overall Rating (On a scale of one to six beer cans with one being a stinker and a six-pack an instant classic) — Two cans of warm generic stuff pirated out of the spare tire well of a rusty AMC Gremlin in a Vermont junkyard.

Next Up – NASCAR heads to the Monster Mile of Dover, the third race of the Chase and hopefully the first that offers up some excitement for the fan base this fall.