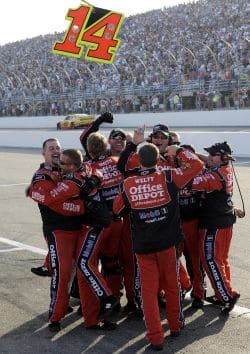 For the first time since the August 21st race at Michigan International Speedway, the NASCAR Sprint Cup Series finally ran and completed a race on a Sunday afternoon. Between the Saturday night extravaganzas at Bristol and Richmond, plus the rainouts at Atlanta and Chicago, it’s been a long time since the series actually ran a race in its traditional timeslot.

The Sunday date was the only return to normalcy, though, as everything else was topsy-turvy. Between Jimmie Johnson’s mediocre performance, Tony Stewart’s back-to-back race wins, and Kurt Busch’s pre-race troubles, even the sometimes slow pace of the Sylvania 300 wasn’t enough to deter race fans. Is this perhaps the most exciting Chase since the format was implemented?

As the series heads to Dover this weekend, all eyes are on the title contenders for the final eight weeks of the season. Even with two races in the books, the championship picture isn’t any clearer but we can certainly shed some light on the subject. First things first, let’s take a look at the “hot” drivers heading into this weekend’s events at the Monster Mile.

The entire No. 14 team is living the high life with back-to-back wins at Chicagoland and New Hampshire Motor Speedway.

*Tony Stewart* – All of my pre-Chase notes have been wadded up and thrown in the dumpster out back since Tony Stewart exceeded all expectations by winning the first two races in the Chase. It was only a few short weeks ago Stewart was down on his team, saying “We don’t deserve to make the Chase” and struggling to remain relevant in the title hunt.

While Smoke’s “dead weight” comment has the NASCAR world abuzz, whatever it was clearly did some good for him. Now Stewart, the last driver not named Jimmie Jonson to win a championship, has a seven-point lead over Kevin Harvick and has the most momentum on his side since Brad Keselowski went on a similar streak a little over a month ago.

Now, if only Stewart could shed some of that dead weight in the stomach region, he’d be in good shape. Literally.

*Jeff Gordon* – Following a 24th-place showing at Chicago, Gordon desperately needed a strong run in Loudon in order to maintain a shot at this title. The four-time champion did just that on Sunday, leading 78 laps and finishing fourth in the Sylvania 300. That jumped him from 11th to fifth in the standings.

It’s surprising to say, but Gordon is currently a bigger threat for this championship than teammate Jimmie Johnson. In fact, everyone except Ryan Newman and Denny Hamlin are currently in a better spot than Johnson, including teammate Dale Earnhardt, Jr.

But that’s beside the point. If I had to choose a favorite for the title right now—and that’s extremely hard to do—I’d go with Gordon. He’s maintained a consistent, fast pace since around the halfway point of the season, with Chicago’s 24th-place run his first finish outside of the top 20 since the ninth race of the season in Richmond. With consistency acting as the name of the game with this points system, Gordon currently has the upper hand. The only thing working against him right now is a 23-point deficit from leader Tony Stewart, but one bad pit call, blown engine, or crash could easily fix that. Keep an eye on that No. 24 car in Dover.

*Honorable Mention:* We can’t forget the Truck Series guys, even though the race at Loudon was entirely forgettable. *Ron Hornaday Jr.*, who is racing for a ride next season, finished fourth last week for his ninth top-5 finish this season. Though his chances of winning the title are slim (5th in points, -47 out), Hornaday is still running true to form and needs to keep finishing up front to attract potential employers and, more importantly, sponsors for 2012.

*Carl Edwards* – It’s a little surprising that Edwards hasn’t been thrown around as a legitimate threat for this title, but his stats show otherwise. Similar to Gordon, Edwards has been in the top 10 week in and week out for the past five races and currently sits fourth in points, only 14 out of the lead.

His lack of appearances in Victory Lane — only one so far this season — is most likely what is keeping him under the radar. But Edwards is in perfect position to pounce if one of the top three makes a mistake.

Oh, and by the way, he has also been strong at Dover. In 14 starts at the Monster Mile, Edwards has one win, 11 top 10s, and an average finish of eighth, which are the kind of statistics that suggest the Missouri native could be a threat for the victory come Sunday. Carl has the momentum, and he has the talent. Now all he needs is the trophy and he’s slowly but surely sneaking his way up to the top of the standings.

2011 started off ugly for Juan Pablo Montoya, but he’s been making the most of it down the stretch while preparing for an all-out assault on the Chase in 2012.

*Juan Pablo Montoya*- While he’s not in the Chase, the rolling chicane known as Juan Pablo Montoya deserves a shout-out for a recent string of top-15 finishes. His ninth-place run at Loudon was his fourth such result in a row, though it hasn’t much helped him in the points. He’s currently 19th, 29 points out of 13th which is the highest he can finish this season.

I know Montoya isn’t relevant in the title hunt, but a strong run deserves a mention, Chase or no Chase. Hey, you can’t fault me for trying!

*Honorable Mention:* *Regan Smith* is another non-Chase driver who deserves a pat on the back for a top-10 run at Loudon. It was only his fifth top 10 this season, but top 20s can even be a struggle for this race team and they’ve been there the last three weeks. You’ve got to love an underdog story, though they tend to get lost in this point of the season. However, fuel mileage or not, they were able to make it happen and for that I say “Kudos!”

*Jeff Burton* – I doubt there are many drivers who are more looking forward to the conclusion of 2011 than Burton, whose team is probably more focused on 2012 anyway. While teammate Kevin Harvick is near the top of the standings and Clint Bowyer was contending for the victory on Sunday, Burton and his No. 31 team are riding around every week trying to find even a hint of competitiveness.

Burton has only one top 10 all year — a ninth at Watkins Glen — and is outside the top 20 in points, an embarrassment for a race team at a top-tier organization like Richard Childress Racing. Four teams didn’t work for RCR in the past, and it’s certainly not working now. If Bowyer leaves — and it’s looking like he will — the organization will most likely shrink down to three teams, which may be music to Burton’s ears since it appears he drew the short straw when it came to the best equipment and team.

Hang in there, Jeff! Only eight more to go!

*Joey Logano* – Logano was running much better when he was racing for his job. Since Carl Edwards re-signed with Roush Fenway Racing, Logano has slipped back into obscurity – he’s got just one top-10 finish in the last ten races on oval tracks. Though if we’re being honest, his teammates haven’t been that competitive recently, either.

If that’s really what it takes, though, just start a few rumors that Bowyer is going to take Logano’s ride next season. Heck, he’s been rumored to race just about everywhere else. So put Bowyer hypothetically in the No. 20 seat in 2012 and then we’ll all act surprised when Logano finishes in the top 5 the following week.

*Honorable Mention:* I’m confused. *Dale Earnhardt, Jr.* is eighth in points, but Jimmie Johnson is tenth. How is this possible? I don’t know, because Earnhardt’s statistics aren’t all that flattering. Earnhardt only has one top 10 in the last seven races, which aren’t numbers that are indicative of a Chase driver. I guess Johnson’s really aren’t either, though, which could be good news for the fans wanting to see a different champion.

Jamie McMurray hasn’t been “lovin’ it” when it comes to the 2011 Sprint Cup season. Without a win or a even a top-3 finish to speak of, it’s been a nightmarish year the veteran can’t wait to put behind him for good.

*Jamie McMurray* – I didn’t really think it was fair to put a Chase driver in this spot, so instead I’m going with one of the biggest disappointments this season. Though it was only last year, 2010 certainly seems like a long time ago when McMurray was winning races and almost made the Chase. Now, if he even finishes inside the top 10, it’s a shocking turn of events that can usually be attributed to some sort of strategy call or, occasionally, a bit of speed that doesn’t usually last longer than one week.

The four top 10s this year are lone bright spots on a dismal season for McMurray, and it’s hard to not point to last season and say it wasn’t a fluke.

Maybe McMurray can go talk to Stewart about that “dead weight” so he can figure out what the _real_ problem is and get it fixed. Heck, it certainly can’t get much worse, can it?

*Clint Bowyer* – I know I should probably give this guy a break, since he was just one tank of gas away from winning Sunday’s race. But since all but one finish in the last five races is outside of the top 20, I think it’s justifiable.

That is just one reason why I’m so interested in seeing where Bowyer decides to go next year. Even though his team’s performance has been mediocre for most of the season, he still occasionally has races where he is up front and leading laps several times throughout the race. I can’t imagine if he goes to a team like MWR or RPM (where he was rumored for awhile) that he’ll have those same opportunities. Sure, the No. 33 team hasn’t been very fast lately, but maybe when (if) he signs back on with RCR, they can work on getting some of that speed back.

However, I bet a win would certainly help speed up the process, so maybe Bowyer would be a good darkhorse pick for Dover? We’ll see.

*Honorable Mention:* Speaking of MWR, *David Reutimann* hasn’t finished inside the top 10 since Kentucky. Are you listening, Bowyer?!