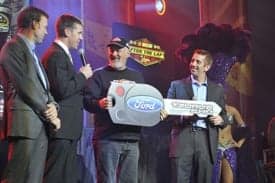 Greg Biffle holds up the “key” for a brand new Ford Explorer for one lucky fan at the 2010 NASCAR After The Lap in Las Vegas.

For the third consecutive year, NASCAR will honor its fans during the Sprint Cup Series Champion’s week in Las Vegas when it hosts the _NASCAR After the Lap_ event sponsored by Ford and Coca-Cola. Once again, fans in attendance will be treated to a tell-all, unfiltered forum featuring the sport’s Chase participants that gives them an up-close look at their heroes. And Ford and the Game Show Network (GSN) will make the December 1st event extra special for two lucky fans through the second annual “SEND ME 2 VEGAS” sweepstakes.

Fans can visit “www.NASCARafterthelap.com”:http://www.NASCARafterthelap.com to enter the sweepstakes from now through November 20th. One lucky entrant will win a 2012 Ford Explorer valued at up to $33,000, a VIP trip for two to the _NASCAR After the Lap_ event, the opportunity to be featured on GSN, a two-night stay at the Hard Rock Hotel and Casino and round-trip airfare for the winner and one guest. But wait, there’s more: the winner gets $500 cash _and_ an officially-licensed NASCAR gift basket valued at $500.

Partaking in this unique event allows fans to see the 12 best drivers of the season in rare form. Highlights from last year’s “NASCAR After the Lap”:http://www.multivu.com/mnr/52092-send-me-2-vegas-sweepstakes-2012-ford-explorer-vip-trip-nascar illustrate how attendees learned about everything from the color of Kyle Busch’s underwear to who Jeff Burton would want to play him in a movie. The grand prize winner even had a once in a lifetime opportunity to meet three of the top Ford drivers on the circuit – Greg Biffle, Carl Edwards and Matt Kenseth.

While the event may be a little embarrassing for some of the drivers, it certainly provides the fans with the level of interaction NASCAR believes they deserve.

“NASCAR has the most passionate and loyal fans in all of sports,” said Norris Scott, vice president of partnership marketing and business solutions for NASCAR. “They are our greatest competitive advantage, especially for partners such as Ford and Coca-Cola.”

One lucky fan may come out as the biggest winner in the “SEND ME 2 VEGAS” sweepstakes, but he or she certainly won’t be the only one. The competition’s sponsors also gain tremendous value from supporting this event.

“‘SEND ME 2 VEGAS’ is an instrumental platform in Ford’s marketing strategy for NASCAR,” said Jamie Allison, director of Ford Racing. “In addition, _NASCAR After The Lap_ offers us quality interaction with our customers, which is invaluable.”

The competition integrates perfectly into GSN’s “The World Needs More Winners” campaign, which is designed to identify, celebrate and inspire all types of success stories. Along those lines, the “SEND ME 2 VEGAS” grand-prize winner will be featured in an on-air promotional spot that will air early in 2012 on GSN. The network will also run features during the entry period which will include Sprint Cup Series drivers discussing their NASCAR winning moment and encouraging fans to enter the sweepstakes.

Jeff Gordon opens up while Matt Kenseth looks on during a laid-back, question-and-answer session at NASCAR’s 2010 After The Lap in Las Vegas.

For those who are not fortunate enough to win this contest, all is not lost. Starting October 3rd, general admission tickets to _NASCAR After the Lap_ can be purchased for $20 on a first-come, first-serve basis by going to “www.nascarafterthelap.com.”:http://www.NASCARafterthelap.com The event, which will be held at The Joint at Hard Rock Hotel & Casino will be just one of many events for fans to attend on that particular day. The Coca-Cola fan zone will provide an ideal place to view the NASCAR Victory Lap finish line, and there will be plenty of fan-interactive experiences such as The Sprint Experience, Ford, Coca-Cola and GSN displays, along with concessions, entertainment, and games.

Of course, not everyone can afford to make it out to Vegas on their own dime. But for the millions of other NASCAR fans who are unable to make it out West, there are still plenty of options available to learn everything they wanted to know about the Sprint Cup Chasers. _NASCAR After the Lap_ will be available via webcast on “NASCAR.com”:http://www.nascar.com and broadcast on SiriusXM Channel 90.

After 36 weeks of hearing about car setups, tire wear and pit strategy, _NASCAR After the Lap_ will provide the perfect opportunity for fans to get to know the drivers behind the wheels on an entirely new level. For one lucky “SEND ME 2 VEGAS” winners, the driver forum will be the icing on the cake on top of an already amazing Vegas experience – NASCAR style.

*Learn More:*
“NASCAR After The Lap”:http://www.NASCARafterthelap.com