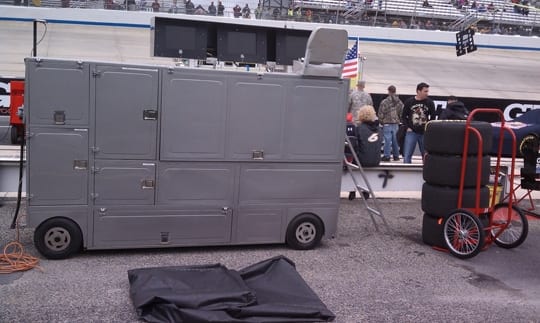 *Did You Notice?* … In the most competitive Chase in history, teams and drivers will do whatever it takes to get ahead. Stay out on fumes to lead a lap, take two tires with an ill-handling car for track position, “play nice” with start-and-parkers in front of them to help their pit selection…

Huh? Yeah, that last one doesn’t seem to fit. But one has to wonder what was going on this weekend between the No. 14 of Tony Stewart and the No. 46 of Scott Speed. Some background: NASCAR teams are ranked in pit selection by their final qualifying time. For example, the polesitter picks first, then the second-fastest car, the third-fastest, and so on. What crew chief selects what stall can be exceptionally important, especially in a track position race where one or two spots lost on pit road can leave you stuck back in traffic for the entire course of a green-flag run. Add in Dover’s narrow pit lane, one of the most difficult of any racetrack on the circuit and strategy was the name of the game for several Chase contenders with their locations.

Take Jimmie Johnson, for example in “Jayski’s pit road map”:http://www.jayski.com/stats/2011/pitstalls/29dov2011pits.htm for Dover. Qualifying sixth, Johnson had the pick of the litter in terms of options and chose the 43rd and final stall on pit road. Because of that, he had an easy in and (he hoped) an easy out based on whether the driver in front of him would be a start-and-parker (out of the race early) or a backmarker that would pit off cycle as a lap down. In this case, Johnson got lucky. J.J. Yeley and the No. 38 car selected the stall one spot ahead, a team that went a lap down before the Lap 40 competition caution with a faulty plug wire. That disaster, while bad for them opened pit lane free and clear for Johnson the rest of the day.

Sometimes, you just plain get lucky picking your pit. Matt Kenseth, qualifying 18th wound up with a stall that had start-and-parkers both behind and in front of him: the No. 30 Chevy of David Stremme and the No. 87 of Joe Nemechek. That meant after the first few cautions, those Killer B’s could do lightning-fast pit work and not have to worry about being blocked in. But once you get back to 27th, 28th in line the options for getting lucky become few and far between.

Which is why it’s so interesting to see what happened in the case of Stewart. Picking his pit stall, the No. 14 car wound up with stall 33, not an optimal selection but directly ahead of pseudo-teammate Dale Earnhardt, Jr. in the No. 88. That would help make for an easy in and out, right? It’s not like good buddy Junior’s going to make Stewart’s life miserable coming down pit road. But then, there was the matter of who pitted in front… someone like Brian Vickers (qualified 30th) who was capable of staying on the back of the lead lap all day could leave Smoke fuming after pitting on an angle, adding seconds to his pit stop the veteran simply couldn’t afford.

Any worries were erased, however once Speed, who qualified 29th (one position behind Stewart) picked the pit stall in front of Smoke. How convenient, right that the start-and-parker with 15 possible choices selected the one directly in front of the No. 14? Why that happened, giving the point leader a better stall than expected we’ll never know; all we can show you are these pictures that reveal the lone, scuffed set of tires sitting in the No. 46 pit. The label and color on that tire roller, holding Whitney’s oft-used Goodyears in place? None other than the No. 14 of Stewart’s.

From the No. 14 car of Tony Stewart. Was that simply a Good Samaritan gesture, or a “thank you” that could have taken the form of 1,000 things after the No. 46 start-and-parked early – that gave Stewart more room on pit road.

It’s impossible, of course to know the details of any deal that might have been struck; Stewart, with a bad-handling race car ran 25th and never got to reap the rewards of that stall. But it’s a reminder to all of us that with passing at a premium, where and how teams pick their stalls should be something closely watched down the stretch. Such positioning could mean the difference between winning and losing a championship, just as much as running out of gas or simply not having the speed to keep up.

*Did You Notice?* … The rise and fall of Reed Sorenson? Our “Bryan Keith”:https://frontstretch.com/bkeith/35805/ tackles the alarming economics and possible disaster cloud surrounding Turner Motorsports. Right now, the circumstances behind Sorenson’s firing point to minor financial instability at best; at worst, the complete collapse of a four-car organization appears imminent. How can you fire a man who’s collected three straight top-10 finishes in your equipment? How can you claim “business as usual” when the replacement, Brian Vickers, is in desperate need to keep his Nationwide Series license and is likely pulling a favor for a serious discount (as in, cheap to free?)

But let’s focus in on the victim for a second, a man in Reed Sorenson who may have finally run out of chances. He’s the latest example of a “young gun” whose career that was once destined for superstardom has now wound up in the unemployment line instead; and this setback, perhaps permanent is happening at 25 years old.

Reed Sorenson during better days with Chip Ganassi, celebrating after the only Sprint Cup pole of his career – 2007’s Brickyard 400 at Indy.

It wasn’t supposed to be this way in ’04, when Chip Ganassi took the 18-year-old Georgian, plopped him in as the then-Busch Series Driver of the Week and saw the young phenom surge to 13th at IRP. In an age when any teenager with a cute smile and a marketable face could get a ride, Sorenson was labeled development gold without the necessary discipline to keep him grounded. That didn’t affect the Honeymoon phase, Sorenson jumping to Sprint Cup at 20 after two victories, 19 top-10 results and a fourth-place finish in the Busch Series standings in ’05. It was the Casey Atwood phenomenon personified, rich owners making rich kids too quickly while turning cautious in the wake of that disaster _not_ to get too jumpy and fire them after one season.

But that promotion, the beginning of a three years-and-you’re out catastrophe showcased the downside of giving a youngster too much money and power without maturity. According to sources at the time Sorenson was often lazy, inattentive with the car’s handling and more interested in garage girls than giving feedback. Late or even absent for key meetings and sponsor appearances, by the end of ’08 Ganassi had enough: Sorenson was sent packing, landing in Richard Petty’s lap instead.

It was here that the “young gun,” now a seasoned veteran at 23 would learn some of life’s hard lessons. By midseason, drowning in debt RPM had an ugly ultimatum for the underperforming driver, ignoring a meaningless contract: drive for free or earn a pink slip for your troubles. The second half of that season saw Sorenson compared to the Walking Dead; he went through the motions, scored a top 15 or two but for all intents and purposes saw his Cup Series career, confidence and shaky reputation come apart.

Enter Braun Racing, the “no pressure” environment where Sorenson could rebuild and refocus at NASCAR’s “AAA” level. In the past, with a healthy sport it was a necessary step to earning yourself another Cup Series chance: men like David Green, Steve Grissom, and even Jason Leffler were able to step back up. But the second Steve Turner bought the team, Sorenson’s days in the No. 32 appeared numbered no matter how much success was achieved. A young James Buescher, combined with Ricky Carmichael’s money is what Turner’s really connected to; anything or anyone else succeeding is icing on the cake.

And once Sorenson’s relationship with teammate Justin Allgaier turned frosty, culminating in that ugly Atlanta wreck the door was opened for major changes within a program already hurting for money. Which one would you want to keep, the problem child or the driver who you might not be paying either – but will keep his mouth shut? It’s a shame, since that one incident and a few offhand, critical comments on the car masked a driver in Sorenson who was clearly growing up, recognizing his faults and working diligently to mature both on and off the track.

But in another sense, Sorenson was lucky to receive as many opportunities as he did. Ask Danny O’Quinn, Bryan Clauson or Kelly Bires if they have sympathy for Sorenson; they’re just a trio of could-have-beens waiting for another chance that never comes. Instead, rides will go to replacements like Vickers, keeping his past champion’s provisional active and becoming an attractive option to either top-tier rides or, gulp, those who would want him to do nothing more than start-and-park.
No matter what, though the fact that someone third in points, within striking distance of the championship is now “parked” in his own right is disgraceful for the Nationwide Series. Maybe, just maybe with Sorenson’s past history we should have seen this one coming… but it doesn’t make it right.

*Did You Notice?* … Quick hits before we take off…

– So Clint Bowyer is signing with Michael Waltrip this Friday after all, huh? Guess they’ve “mended fences”:http://www.youtube.com/watch?v=qgVrXq_Iie4&feature=related after this 2008 incident at Bristol in August. Hope NAPA doesn’t remember Bowyer did that… oops!

– When I think of Kansas this weekend, all I can remember in my head is the battle between “Jimmie Johnson and Carl Edwards on the final lap.”:http://www.youtube.com/watch?v=Raqkb8uY0iE You know the one, where Edwards sailed his No. 99 so hard into Turn 3 he slammed the wall like a video game? That vision is really nagging at me, to the point I feel a repeat is in the cards on Sunday – or at least a sequel to the ’08 title battle that Johnson won down the stretch.

– Has anybody heard from *Joey Logano* lately? His post-race press release said he hit the wall at Dover, but he’s so far back in the field these days no one seemed to realize it… or care. What must sponsor Home Depot be thinking after watching Carl Edwards, our current co-point leader slip through the cracks?

– In the past week alone, I’ve seen two high-profile departures from Red Bull Racing: Technical Director John Probst and former Brian Vickers PR director Jayme Christianson, who was hired by NASCAR’s Communications Department. Now, Brian Vickers is off to take a ride with a Nationwide team, likely for little to no cash in hopes of keeping his status intact for 2012 in that series. Hmm… major personnel jumping ship? Doesn’t seem like a program that expects an investor to save it anytime soon.

– With Turner Motorsports’ possible collapse, combined with the RBR exodus above you’ve got to keep an eye on goings-on over at Roush Fenway Racing. Last I checked, neither the No. 6 or the No. 17 (yes, Matt Kenseth!) were fully sponsored for 2012 and no announcements were forthcoming. There appears to be an assumption the team can survive with four cars next season, even if one is unsponsored… but how much money can Jack Roush spend out of his own pocket? He’s run a blank race car in the past, but in 2012? With the costs like they are? Is it really possible?

There’s a whole lot of employees sitting in that shop that don’t want to find out.