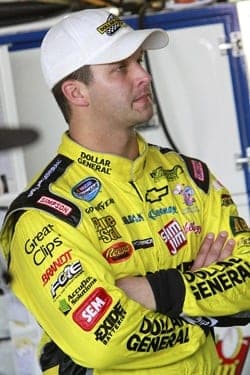 Less than a month ago, NASCAR’s two lower national touring series were rocked by the news that Kevin Harvick, Incorporated was ceasing its racing operations following the close of the 2011 season. It was the first time in recent memory that a well-sponsored, upper middle-class racing organization was impacted by the harsh financial and competitive realities of today’s Nationwide Series, built as a development division combined with lifetime racing veterans that, at the moment, is creating homes for neither.

Less than a month later, disaster struck again. Despite being third in points, only a solid finish and some help away from being a red-hot contender for the Nationwide Series championship, Reed Sorenson was unceremoniously dumped from Turner Motorsports’ No. 32 car, with Cup regular and former Dollar General driver Brian Vickers taking the seat for the next two races. The announcement came amongst rampant, well-founded reports that Dollar General was leaving Turner following the season; multiple sources speaking to Frontstretch have linked the longtime NASCAR sponsor to elements at Joe Gibbs Racing and Kyle Busch Motorsports (a partnership of some sorts is rumored to be in the works between the two camps to field a Nationwide entry in 2012).

Reed Sorenson’s world turned upside-down in the matter of one afternoon, fired from his ride at Turner Motorsports.

The displaced Sorenson remarked earlier Tuesday: “I’m not sure what happened. I got a phone call this morning, but they didn’t really say much. All they would say is that I’m out of the car. I haven’t gotten a reason, I’m just as confused as you are.” Confusion isn’t the operative word as much as uncertainty. Uncertainty as to why Sorenson got yanked a mere five races from the end of the year, with the title still a realistic possibility and on the heels of three straight top-10 finishes. Uncertainty as to just how many sponsor dollars are going to be left in the coffers of the premier independent Nationwide Series organization for next year. Uncertainty as to just what the direction of an organization announcing layoffs and driver releases left and right is going to be with times getting tough and only one driver in the fold (James Buescher in the Trucks) having any real significant connection to the team’s ownership. (Remember, Steve Turner is Buescher’s future father-in-law).

The reality is there’s two likely scenarios, and neither bode well for both team and racing series. Because no matter how the story gets cut, the Nationwide Series’ big boys are now smack in the middle of the hardships that have been plaguing the majority of the garage for years now.

James Buescher, engaged to Steve Turner’s daughter does not even have a full-time sponsor for his Truck Series organization gunning for the series title.

Best case? What’s transpiring at Turner Motorsports is truly a case of challenging times and bad economics. Sponsor dollars for motorsports are about as scarce as fiscal responsibility is amongst politicians these days, and Turner is just one of the bigger names to fall victim. With Dollar General still not confirming that they’re actually leaving the Turner camp after this year, there’s always the chance that the team has enlisted the help of Vickers, who has previously driven the yellow No. 32 with great success, as a last-ditch effort to sell the company on just what Turner can do on the track… and the type of talent they can get behind the wheel. It’d be impossible to blame them for getting desperate; between the team’s Penske-Racing caliber appearance at the track and expenses that come with garnering technical and engine support from Hendrick Motorsports, they have the same type of overhead that made KHI balk. Meanwhile, Justin Allgaier’s sponsorship for 2012 is undetermined, the team’s primary Truck driver in James Buescher still doesn’t have a full-time primary backer despite being a series championship contender… and all of this crisis comes while the team’s fourth Nationwide car is already running on patchquilt sponsorship.

Yes, that’s the best case… and sadly, the best case doesn’t add up. Dollar General hasn’t made an official announcement, but they’re gone, meaning that hiring Vickers to drive isn’t a move to secure backing. In fact, Dollar General had informed the team they were leaving weeks ago – it’s not like this move came out of left field. The reality is, Reed Sorenson got the boot in favor of another driver in the thick of a title chase. And again, three straight top-10 finishes… it’s not like performance has been an issue of late, much less all season.

No, the utter conundrum that this firing presents takes any sort of a “best case” consideration off the table. Just take stock. A title contender who has shown a career resurgence the past two seasons after being moved to Cup too early in his development process, out of the hunt with the prey in sight. Veteran Jason Leffler, despite again being a fixture in the series’ top 10 all year long, has been told thanks, go do your deeds somewhere else. And a team, much like KHI, that has been a pillar of stability for years in this series (both under the Turner and Braun banners) has notified the state of North Carolina that significant layoffs are forthcoming.

So, think darker. Did something happen with Sorenson to force ownership to make a change at the 25th hour? Was the bad blood between he and teammate Justin Allgaier, which was so toxic it was the talk of the Nationwide garage at Richmond a few weeks back, irreconcilable? Did bad habits resurface (multiple sources have long informed Frontstretch that Sorenson found trouble during his early career with missing sponsor appearances while struggling to be an active, energetic participant behind the wheel giving feedback to his crew chiefs)?

Did the omnipresent Rick Hendrick step in to interact for yet another former driver? Let’s not forget that HMS development washout Blake Feese resurfaced out of nowhere into a partial Truck schedule in the Turner camp earlier this year. Now, with Red Bull Racing all but assuredly done after Homestead next month, Brian Vickers suddenly needs a job… and much like Elliott Sadler in 2010, a career reboot. Is it really that hard to connect the dots that the primary technical backer for Turner’s program called in another favor?

Or is Steve Turner the next Bobby Ginn? Back when he appeared on the NASCAR circuit back in 2007, Ginn was hailed as a hero by many. Not just for saving MB2 Motorsports, but for saying all the right things about how his personal fortune was going to build a massive racing enterprise, creating jobs and opportunity for many talented individuals. Less than six months later, Ginn was gone, countless drivers and employees were out of work, and all that promise of new blood making a significant impact in NASCAR ownership disappeared.

To be fair, even with all the talk of cutbacks and driver releases, Turner is not on paper anywhere near the total dissolution that Ginn Racing exhibited; “the NASCAR Insiders reported”:http://www.thenascarinsiders.com/2011/10/03/breaking-news-turner-motorsports-employees-receive-warn-letters-dollar-general-gone/ that the team will likely still field two full-time Trucks and NNS cars next year. But as this story floated through the community this afternoon, a surprising issue came up for a team that’s again been the class of Nationwide-only organizations… money. Sources inform Frontstretch that Reed Sorenson had not been paid in several races leading up to his dismissal this Tuesday. What’s more, conversation with one of Turner Motorsports’ shop employees painted an even more distressing financial picture:

“When Turner came in, made the acquisition in late 2010 he promised quarterly reviews, all this stuff to make us more competitive. Well, I haven’t ‘seen’ Turner since that day. Sure, I’ve seen him ‘blow by’ three times, sneaks into his office and then leaves. We haven’t talked to him, haven’t seen him, not one performance review since he bought this company out.”

“Yesterday, we all had to go in and sign a piece of paper saying that we understood Turner would lay off at least 33% of their workforce.”

This employee also indicated his 401K and overtime benefits had recently been cut. But again, it’s not a complete withdrawal from the sport, a la Bobby Ginn. Turner’s in-law James Buescher still has a stake in the sport, so the situations aren’t completely parallel. But the rumors starting to swirl in the Nationwide garage, this account from a shop employee, and the fact that none of the stats, none of the circumstances provide a compelling case for Sorenson’s dismissal on the merits. That leaves the money.

And no matter which of the scenarios discussed plays out, the fact remains that the current distress of the modern Nationwide Series has worked its way up the ladder, affecting even the elites. Best case, even mighty Turner Motorsports, with Hendrick backing and a driver stable that included three race winners and the 2009 Rookie of the Year couldn’t find the sponsor dollars to keep a good thing going. Worst case, NASCAR has seen yet another example of just how flawed its business model is; a heavy, cash up front system that’s drawing in not racers turned owners who are penny-poor and dollar-smart, but big-dollar names that quickly learn just how hard this sport is only to scale back or bow out.

Ironically enough, downsizing was never on the mind of Steve Turner when he first purchased this program during the Fall and Winter of 2010.

“They will all get their money’s worth,” “he said to SceneDaily’s Bob Pockrass last December.”:http://www.scenedaily.com/news/articles/nationwideseries/Steve_Turner_owner_of_four_Nationwide_three_truck_teams_says_he_wont_just_be_an_owner_with_a_checkbook.html “I don’t need their check to buy a boat or buy an airplane or go fishing or any of that.”

Looks like a classic case of racing naivete. Certainly, at this point Turner understands the value of sponsors in this sport; the only question is whether an inability to land them has caused the owner to bite off far more than he can chew.

Today, whatever the rationale, a Nationwide Series title contender was pulled from the hunt five races from the finish. It’s the equivalent of cutting a full season starter from the roster in game 2 of a 7-game series and telling him sayonara. It’s added even more uncertainty and turmoil to the situation over at Turner, right as the time to find backing to make 2012 happen has arrived.

Whatever the reason for this move is, there is no silver lining.