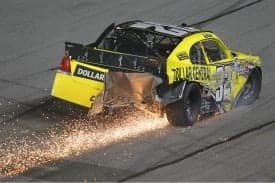 With Reed Sorenson out of the Nationwide Series title picture, the trophy hunt is now devoid of an underdog contender.

But look at it another way. With Sorenson gone, Sadler and Stenhouse are on their own to settle this. There’s nobody chomping at the bit to harass them if they get too busy doing their own thing. And with the points margin still far from insurmountable for the second-place driver, points racing will be in full effect. Sure, Sadler and Co. will give the right company line about doing everything they can to visit victory lane, espouse that everyone tries to win every weekend. And let’s not forget that Sadler all year long has been constant in his belief that it would take three wins to secure the NNS title this season. With only five races to go, should that hold true, Sadler would have to win 60% of the remaining races to have a prayer in this trophy hunt.

Never mind the fact that due to a points system that does next to nothing to reward winning, Sadler could win the next five races and still struggle to catch Ricky Stenhouse Jr.; five top 5s for the No. 6 team and all that winning would mean nothing. Let’s play a likely scenario out. Saturday’s upcoming 300-miler is a fierce battle for track position. The tires don’t wear, over half the field is simply making laps to preserve equipment, and debris cautions will break up the action long enough to let the pit crews do their thing. On that final run, between gambling and staying out to take the lead or pitting to maintain an eighth or ninth place position in the running order, anyone really see the No. 2 gambling, staying out to try to take first even if it means getting run over and finishing 21st? There’s no pressure from behind now to keep the team honest…it’s all about not losing ground to the No. 6 instead of actively maintaining a position in the top 5. Sure, the opposite argument could be made…that without Sorenson to worry about, Sadler and team can cut loose and go after the No. 6…but again, does anyone really see Sadler and team going for the win in the scenario above?

The championship battle has definitely lost some of its luster with dwindling numbers. The underdog is out of the equation. Just another product of the ailing Nationwide Series field. And it’s not the only battle that’s been rendered all but moot thanks to the state of the sport.

Look at the top 10 in driver points. There’s absolutely no battle to be had…the top 10 is all but done. A whopping 84 points sit between 10th place Michael Annett and 11th place Mike Bliss. Barring an epic five-race meltdown and a rash of wrecked No. 62 cars, the top 10 is set in stone. It doesn’t get any better for the top 20 in points, with 50 markers dividing 20th place Derrike Cope and 21st place Morgan Shepherd. Considering Shepherd is running on next to no money, this isn’t even a battle. The top 20 is all but locked in, meaning the top 20 drivers all have their share of the season-ending points payout on lockdown. And considering positions 11-20 includes TriStar Motorsports’ unsponsored No. 19 team, JD Motorsports’ patchquilt-sponsored No. 01 team, the Clements family’s No. 51 team, Rick Ware Racing’s No. 15 and others, that’s a huge chunk of the top of the field that’s already in survival mode trying to make Daytona 2012. Good business sense, not the recipe for great on-track action.

And lastly, there’s that battle for the top 30 in owner points, to be locked into the Nationwide Series field. Only there is no battle, and there hasn’t been for quite some time. There’s only 32 teams even eligible for those spots that are contesting the circuit…and the two that aren’t locked in are both start-and-park cars. One of the biggest incentives NASCAR’s rules creates for the back of the field to race for has been absent for the better part of the 2011 campaign.

All of this stems from the fact that, from the back to the front of the field, the Nationwide Series business model is flat broken. And the field is sick as a result. Title contending operations are downsizing and unsponsored. The top 20 teams are so demarcated from the rest of the field, there will be no contesting amongst the competitors in the middle part of the field for a final season payout. The top 30 teams are so set away from everyone else racing week after week…and they’re locked in until Daytona 2012.

Even if the tires suddenly get better, the racing suddenly gets harder and the fuel mileage disappears from the equation on Saturdays, the only battle left to be settled on tour this year is that between first and second. And considering both that Elliott Sadler’s No. 2 team is facing a merger to survive after Homestead (while the driver also appears no closer to his goal of returning to Cup) and that Ricky Stenhouse Jr. has no certain plans for 2012 as Roush Fenway Racing struggles to find sponsor dollars for the No. 6 squad with a full Cup stable, just how much is winning that battle going to be worth?