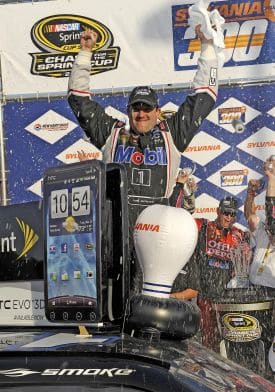 *Through three Chase races, is the Cup Series in line for its closest points battle ever?*

If last Sunday’s race at Dover did anything to stake its role in this year’s Chase, we may look back at it as the one that set the stage for one of the tightest points battles the sport has ever seen. As the Sprint Cup series heads to Kansas this weekend – a track notoriously strong for the majority of the top Sprint Cup title contenders – the gap between points leaders Kevin Harvick and Tony Stewart and ninth place Jeff Gordon is a mere 19 points.

Those nine drivers will likely go to toe-to-toe for the next two weeks at the intermediate tracks – Kansas and Charlotte – before the annual wildcard event at Talladega. Nine Chase drivers finished in the top 10 at Kansas in the spring, and most found similar success at Charlotte and the other two intermediates that remain on the schedule, as well. Sure bad luck and circumstances out of their control will ultimately knock a few of the top 9 drivers out of contention, but there could easily be a situation where four or five drivers have a realistic shot at the title come Homestead-Miami.

Depending on the number of Chasers that Talladega claims, the top 10 in points are so closely competitive at the other tracks that there more than likely won’t be one driver that pulls away from the rest of the field. We’ve seen close points battles before; even just last year Denny Hamlin led Jimmie Johnson by a mere 15 points (old points format) going into the finale. But in one of the most wide-open points races ever, we may see a handful of drivers fighting it out at the end of the year.

*Can Tony Stewart make it three-out-of-four?*

Tony Stewart has made a habit of visiting victory lane three races into the Chase, and stands a great shot at a return this Sunday.

Despite going winless throughout the first 26 races, Tony Stewart has established himself as a championship contender with wins in two of the first three Chase races. A 25th place finish at Dover may have dropped Stewart to third in the standings, but that could very well change this weekend.

If you look at the last handful of races at Kansas, there are only a few drivers who jump out at you as weekly contenders at the 1.5-mile speedway. Stewart is one of them with three consecutive top 10s and a win in his last three races and four top 5s in his last seven starts. In eleven Kansas starts, Stewart has finished in the top 10 eight times. While the Hendrick duo of Jimmie Johnson and Jeff Gordon, and the Roush duo of Greg Biffle and Carl Edwards will be the consensus favorites for the win, Stewart stands a great chance at having a big points day and scoring a third win in four races.

*Could Phoenix ultimately determine the Chase?*

By most expectations this year’s Chase will be the most wide-open ever (see above). Using that logic, it wouldn’t be completely irrational to consider that the next-to-last race at Phoenix could ultimately be the biggest obstacle for whoever the championship team may be. Following a test this week at the newly configured Phoenix, the common consensus is that the “new” Phoenix certainly drives differently than the old.

Situated around a number of intermediate tracks, Phoenix joins Talladega and Martinsville as the only non-cookie-cutters in the final seven races. Given the unpredictability of what is essentially a new track, it will be a true test of driver and team. As controversial as the timing to make drastic changes to a Chase track may have been, it’s also intriguing. The problem with seeing the same tracks in the Chase year in and year out is that often, you know who’s going to run well, and who won’t. If the best team is going to win what could be the closest championship ever, they will have to be the team that can also develop a setup that can win at the new Phoenix.

*What can we expect from the Cup debut of Austin Dillon?*

One of the more under the radar stories regarding the upcoming race at Kansas is the Cup debut of Truck Series points leader Austin Dillon. Dillon will try to make the field for the Hollywood Casino 400 in the No. 98 President Ronald Reagan Centennial Chevrolet for car owner Mike Curb, testing the waters in the series that he will likely one day compete full-time in. Dillon currently leads James Buescher by a mere three points for the Truck Series crown and is a fan favorite because of his relationship as grandson of Richard Childress and his success running the famed No. 3.

While Dillon won’t likely carry the No. 3 as he moves up the ranks, he will continue to be a popular driver, and depending on the circumstances, a competitive one as well. For this weekend; however, simply making the field and finishing in the top 20 can be considered a successful debut. As if there aren’t enough interesting stories to follow at Kansas, the success of Dillon will be another one.