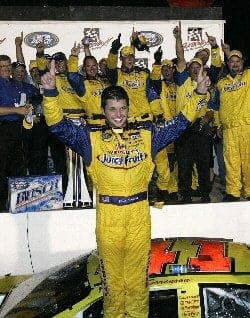 When you turn 18 years old, there are a lot of things that you find yourself suddenly able to do: go to college, smoke a cigarette, vote, drive a NASCAR Sprint Cup racecar…

Yep, you read that right. The minimum age for competing at NASCAR’s highest level is 18. There has been occasional talk of raising it to 21, but nothing has come of that (and it’s not that long ago that the lower age limit for a national touring series was just 16). Most of that talk was centered around the safety of the competitors-is an 18-year-old experienced enough to handle a racecar correctly in a bad situation? Are the other competitors at greater risk of injury with a youngster or three in the field? While those are certainly valid questions, the main reason for pushing the start of a Cup career back a few years wasn’t really part of the decision.

Coming up too early can be a career killer.

We’ve seen it before: a talented driver takes the NASCAR scene by storm. Everyone talks about him and how great he is in the driver’s seat and how he’s a future champion and on and on. The young driver enjoys some success in ASA, ARCA, a NASCAR regional series, or the sprint car or open wheel ranks. He might, if he’s lucky, get some races in a NASCAR national division, but before he knows it, someone wants to put him in a Cup car. Sometimes the owner even has to wait for the driver to turn 18 so he can make his debut.

And then comes the pressure. At first, at least in public, the goal is to complete laps and learn. But soon it becomes more than that: top 15s, top 10s, race wins, sometimes in equipment that’s no more ready for the big time than the driver. And if those don’t come, often in the first year, suddenly people start to think the kid isn’t all he was cracked up to be. He hangs around a year or two, and then fades into the woodwork as quickly as he came out of it. You might see him in a few Nationwide races or the Camping World Truck Series, but often he’s out of NASCAR altogether, never to be heard from again.

Reed Sorenson was among the few lucky drivers out there to get a second shot after being rushed to Cup racing, but even that ride disappeared just this week.

Casey Atwood is the poster child for being thrown into the limelight too early, and then tossed away when things don’t go right. Atwood came onto the NASCAR scene in 1998 in the then-Busch Series at the tender age of 17 (he actually had one previous CWTS start in 1996 at Nashville, less than a week after his 16th birthday), and in 13 races, Atwood scored a pair of poles, a top 10, and a top 5 (a second-place finish at Nashville). That was enough for a full-time ride in that series in 1999, when the 18-year-old Atwood won twice. He didn’t win in 2000, his last full-time season in the series, but he had eight top-10 finishes, and Ray Evernham saw enough in Atwood to put him in a Cup car for the 2001 season.

Atwood ran for Evernham for just one year, 2001 and though fuel mileage cost him a win along the way, he never fulfilled his enormous promise, and lost the ride to Jeremy Mayfield. He went over to Jim Smith’s No. 7 Cup team, an Evernham affiliate, in 2002, but never found the magic there, either. In 75 total Cup starts, Atwood did win a pole, but managed only a single top 5 and four top 10s. And then he was gone.

After that fateful 2002 Cup season, in which Atwood never finished higher than 11th, the young driver virtually fell off the NASCAR radar. He did run a pair of Cup races for Evernham in ’03, but outside of that, he has raced just 81 times in NASCAR, and has not started a NASCAR race since 2009. He has not run a full season since 2002. Casey Atwood is 31 years old, and his racing career is behind him.

Atwood is not alone. Sure, you can point out instances of drivers who came to the Cup Series very young and survived, even thrived. But for every Kyle Busch, there’s an Atwood, or a Reed Sorenson, the latest casualty of being rushed too far too soon. Sorenson had even less NASCAR experience than Atwood when he took over the seat of Chip Ganassi’s No. 41 in 2006. Sorenson had just one Nationwide Series year and a handful of races under his belt when he took over the No. 41 seat from Casey Mears, though in that year he had two wins. Sorenson never saw victory lane in a Cup car. He’d score just five top 5 finishes in Cup through 2010.

Sorenson almost got what Atwood never did: a second chance. When he lost his Cup ride at the end of the 2009 season, Sorenson took a step back to the Nationwide Series for independent Braun Racing (Sorenson did run 16 Cup races in 2010, mostly with Team Red Bull in place of an injured Brian Vickers). In 25 NNS races in 2010, Sorenson grabbed nine top 5s, and he stayed on with that team for 2011 when Steve Turner bought it from Todd Braun. Sorenson was an early title favorite this year when NASCAR made a rule that drivers can only race for points in one series, and he didn’t disappoint, winning at Road America and leading the points early in the season.

And then it all fell apart. Sorenson was fired earlier this week. While he is actively looking for a ride, his future is uncertain. Could Sorenson be washed up at 25?

And what about Brian Vickers? He’ll take over for Sorenson in the No. 32 Nationwide ride for the immediate future, but Vickers’ Red Bull Cup team is shutting down at season’s end, and Vickers doesn’t have a Cup ride lined up for 2012, despite his being a Nationwide Series champion and Cup race winner. Is Vickers’ Cup career over at 28, the age he’ll turn on October 24? To put that in perspective, Vickers is one year _younger_ than Dale Earnhardt was when he ran his first full season in a Cup car.

How about Joey Logano? His ride for 2012 looks a bit more secure since Carl Edwards re-signed at Roush Fenway, but it was made clear that Logano could be shuffled out of his No. 20 ride at Joe Gibbs Racing if a bigger name or bigger numbers came along. Logano didn’t even have the luxury of a full Nationwide Series season before being thrown into a Cup car at the age of 18. Logano made his NNS debut at Dover in June of 2008, and was in a Cup car a month later at Loudon.

Logano’s full-time Cup career began in 2009 at the age of 18 with just 19 Nationwide starts behind him, along with three Cup races and a lone CWTS run. Despite the odds being stacked against him due to his lack of experience, Logano did win a Cup race, a rain-shortened run at Loudon in 2009. And he’s gone on to win nine Nationwide races as well. But, if he should be ousted from JGR in favor of another driver, it could still be an uphill battle to land a competitive ride. Logano hasn’t put up the numbers expected of him…at 21.

Once upon a time, drivers, like Earnhardt, came into the Cup Series in their late 20’s, even early 30’s. Now, there are veterans that age-and drivers already washed up.

Coming into Cup later gives drivers something that talent simply can’t replace-experience. Raising the minimum age to 21 would require not so much age as that vaunted experience. In addition, a minimum number of consecutive races (I’d say 70, or the equivalent of two full seasons for anyone under 21) in a national touring division (either CWTS or Nationwide) would also help ensure that drivers coming into the ultra-competitive Sprint Cup ranks have a certain amount of experience on many of the tracks they’ll run in Cup, and against some of the same competition, but without the intense pressure. Even better would be raising the minimum age in all three national touring series to 21 and _then_ having the two-season minimum. Really, it would also be a solid safety measure.

A higher minimum age, combined with a minimum number of starts in a lower touring series for young drivers, could not only improve the safety at the sport’s highest level, it might also ensure that careers aren’t over before they begin-or that those who don’t have what it takes get weeded out along the way-a very positive thing for everyone. Not only would it benefit the young drivers by giving them time to learn and develop properly, it also has the potential to help veterans stay in the game as they aren’t being replaced by drivers who will never be ready but who look like a demographic the sponsor wants to hook.

Taking these measures would hurt nobody, because it would be the same for every driver. And if it kept drivers from being overlooked by the time they’re 25 because they haven’t performed against drivers with many years’ more experience, that can only be a good thing as well. If there was a stronger development path, maybe fans wouldn’t have to look around and wonder, “Hey, whatever happened to Casey Atwood?”