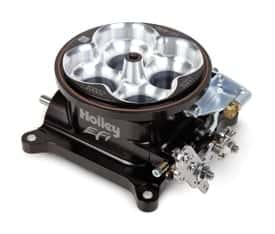 One of the myriad of NASCAR announcements held at the start of the season concerned a long-anticipated move to fuel injection: beginning in 2012, the cars will switch over to the new technology while taking stock car competition down an exciting historical frontier. It wasn’t an easy decision; the move to replace the carburetors that have been used in Cup racing since the sport’s inception in 1949 was discussed at length. Certainly, while their reliability is secure carburetors have virtually no application in modern production vehicles. But how do you make a change from something that works so well with the security your next-generation product will come out OK?

Enter one company – Holley Performance Products – who will be an integral factor in this transition as they’ve been selected by NASCAR to supply their highly-respected, high-performance throttle bodies to Sprint Cup teams as they transition to electronic fuel injection in 2012. Already holding a long-standing relationship with NASCAR, helping assure high quality fuel delivery products have been supplied to their teams for over 40 years, it was a no brainer to trust their parts and pieces in helping make the technology transition smooth as silk. In fact, Holley carburetors have powered every professional NASCAR team since the 1960s.

This new Holley Throttle body will be used in Sprint Cup competition beginning in 2012, one of several mechanical changes as the series switches to fuel injection.

“Holley is proud to have powered the amazing machines found in NASCAR for over four decades,” said Holley CEO Tom Tomlinson. “We have spent nearly two years engineering our new throttle body for NASCAR and are confident we will continue to get the job done as they make the change to fuel injection.”

On NASCAR’s side, the comfort level for this project couldn’t be stronger for a company in Holley whose success has lasted over a century. It all began in the late 1800s with two brothers from Bradford, PA, George and Earl Holley – teenage boys who learned how to make patterns and castings so they could build a one-cylinder engine. That motor was put onto a three-wheeled vehicle that hit, for those days an impressive 30 MPH top speed. Inspired by their project, the innovation between the two was just beginning: motorized bicycles, a four-wheeled automobile called the Holley Motorette and the birth of the Holley Motor Company would soon follow. In 1903, at the urging of Henry Ford, the Holley brothers entered the carburetor business and became industry leaders in fuel system technology.

Holley was founded around the advent of the automobile and has been a supplier to every major American OEM automobile manufacturer. In fact, over 250,000,000 carburetors have been produced over the years for everything from Henry Ford’s original Model A to the baddest factory muscle cars ever to roll out of Detroit. Their expertise even extends into the U.S. Military: Holley supplied half of the fuel systems in WWII including those for land vehicles, marine and aircraft. Its primary focus today is in the high performance aftermarket, where success is an expectation, not a goal: its world famous carburetion has won more races than all others combined.

Holley, proactive in developing EFI systems for street users and professional racers alike, now will lend that expertise to the stock car sector. For NASCAR, Holley will manufacture the new throttle bodies in their ISO 9001:2008 certified Bowling Green, KY facility – the same one where the majority of their NASCAR carburetors have been created. The throttle body is a critical component in the electronic fuel injection system and will be the key to regulating the airflow to the NASCAR racing engines. The Holley throttle bodies were designed using computational fluid dynamics (CFD) software to assure the airflow met NASCAR specs, ensuring raceday is full of exciting action – not expiring engines.

“The fuel injection side of our business is a critical path to our future,” said Tomlinson. “We have a lot of excitement around our new fuel injection program and the NASCAR throttle body will help us continue on that path. NASCAR teams demand the best and we intend to keep delivering just that.”

Surely, Holley as the experience to deliver for years to come; in 2003, they were recognized as one of four original suppliers still selling to Ford after 100 years. Considering the success both sides have had so far, who knows? We may see Holley and NASCAR celebrating the same anniversary one day.