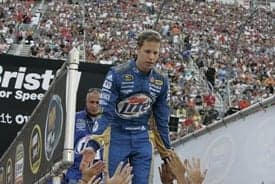 *ONE: Is Brad Keselowski the Juan Pablo Montoya of the 2011 Chase?*

Rewind back to 2009, and heading into the fall race at Charlotte Juan Pablo Montoya was the surprise of the Chase. Ninth in points after Richmond with no wins on the season, Montoya rattled off four consecutive top-5 finishes and led 184 laps over the course of those events; that left him just 58 points from Jimmie Johnson and Chase immortality. But Charlotte was the hiccup that broke the string and reduced the No. 42 team from contenders to pretenders; Montoya scored a top 5 the next week at a Martinsville short track that he’s always run well at, followed by three finishes outside the top 35 in the final four races which sunk any title hopes he and the team had.

That brings us to Brad Keselowski, who – despite three wins – had to sneak into the Chase via a wildcard slate after Richmond. But a last-ditch postseason bid hasn’t stopped the No. 2 team, just catapulted them; with three top-5 finishes in the last four races, he sits only 11 markers out of the championship lead heading to Charlotte, a track where Keselowski won the pole at back in the spring.

Brad Keselowski is set up for a make or break weekend at Charlotte.

The story of that race weekend wasn’t so flashy, however. Keselowski finished 19th in that 600-mile race, leading only the first seven laps and never seeing the point again. Now, to be fair, the No. 2 team has come a long way since the 600, and they have become among the best in the garage at adjusting on their cars to make progress throughout the race. That ability to make changes over the course of an event is why they’ve been able to become a factor for this title four races in.

Whether they can apply that to Charlotte, a track notorious for its temperature sensitivity and fluctuations throughout 500 miles will show just how far they’ve come in six months. For another 19th-place showing, well off the pace and it’ll be wait ’till next year for Penske’s Blue Deuce.

*TWO: That Said, Who Will Make a Move at Charlotte?*

Taking a look at the finishing order from that same race back in May, the coming weekend has special significance for both Kevin Harvick and Kurt Busch. Busch, since his move to Penske, has arguably had no track other than Daytona he’s run better on than Charlotte Motor Speedway; the No. 22 car finished fourth in the 600 even in the midst of Busch’s stretch of meltdowns midseason. Sitting sixth in points right now, the 2004 series champ is still very much relevant in the title picture, but the time for anyone challenging the No. 48 to strike is now. Fresh off a win at Kansas, Johnson is the hottest driver in the Chase, coming to a track where he’s taken residency in Victory Lane. For Busch to hold serve or make up ground at CMS would be an accomplishment; but given his track record there, it’s more of a necessity.

After a Chase filled with gritty performances, keeping him at or near the top of the postseason charts can Kevin Harvick flash the speed to run up front at Charlotte?

As for Harvick, this section of the Chase seems tailor-made for the No. 29 squad this year. Harvick won the 600; he won at Martinsville back in the spring. And now he’s returning to those tracks within a span of three weeks, a single point out of the lead. Looking at how Harvick has fared in the first three Chase races on tracks the series previously visited in 2011, that’s very good news for the No. 29; the team improved their results by nine positions at Loudon, equaled their spring result at Dover, and improved by five positions at Kansas. That trend keeps up, and Harvick’s got victories to look forward to in the very near future. But even if Harvick just top 5s his way through the next few races and weathers the storm in Jimmie Johnson’s own homestretch, he’ll be right in the thick of it heading into Texas and Phoenix… perhaps the two tracks left where top-5 finishes for the No. 48 aren’t automatic.

The Nationwide Series will hit the Charlotte Motor Speedway for 300 miles under the lights Friday… and then will do nothing for two weeks. There’s no doubt the Nationwide Series could use some more bye weeks just to give the smaller teams a breather from the minor league tour, but really? Three races from the title and a two-week gap?

Charlotte’s going to have to be a killer race, because momentum that any team has will inevitably fade with a two-week layoff. Assuming this upcoming event breaks the mold and becomes a fireworks show, with a close finish, traded paint and barbs between competitors, interest is going to have to be sustained for weeks to keep a tight points race that the NNS desperately needs at the front of fans’ minds. Not to mention that the Nationwide Series will be competing for relevance as the Cup Series tackles the tight bullring of Martinsville and the high banks of Talladega, two races that never fail to produce some form of scuffle or controversy.

The 300-miler at Texas that will be run in the first week of November, by comparison seems even further off for NASCAR’s AAA division when compared to the Cup slate approaching. Shame, really… that series didn’t even need a reset to create a championship battle.

*FOUR: Inconsistency Abounds in the Justification for Firing Reed Sorenson*

When asked why Reed Sorenson got the boot from Turner Motorsports despite having won as many races as any of the team’s other drivers in 2011 as well as being their highest ranked driver in points, the owner responded that the team’s inability to improve their race car over the course of a weekend is why Sorenson was let go.

“I never leave my race shop to run third,” asserted the owner in an “interview with Scene Daily’s Bob Pockrass.”:http://www.scenedaily.com/news/articles/nationwideseries/Steve_Turner_says_lack_of_improving_car_during_race_weekend_sparked_Reed_Sorensons_release.html “If I didn’t think I can win, I shouldn’t be coming here.”

Meanwhile, Jason Leffler’s finished outside the top 10 for four consecutive races, losing ground to where he qualified in three of those. Justin Allgaier’s average finish during Sorenson’s final three races with the team was worse than the No. 32. In fact, one would have to go all the way back to Bristol to find the last time Sorenson was beat on track by a Turner Motorsports driver that’s not also a Sprint Cup regular. (Excluding, of course, the Atlanta race where Sorenson lost a top-10 finish because he got run over… by teammate Allgaier.)

This change was also supposedly made to allow a driver like Brian Vickers to evaluate equipment. So why not move Sorenson over to the No. 30 car, as he’s had to do several times this year already to give Mark Martin a seat? Why not release Jason Leffler, who’s been cut out of the fold for next year anyway even though his sponsor is supposedly coming back?

Look, the owner can make a change whenever he so pleases. But Turner would do well to stop insulting the intelligence of both media and race fans alike. Make your case and move on instead of trying to rationalize away what was one of the most shocking moves of the season. Based on the comments of readers on this and other sites throughout the week, the image of Turner Motorsports certainly isn’t benefiting from releasing a title contender with no apparent cause, no facts or stats to back up the move they made.

For their sake, I hope being opaque is worth that as they try to sell sponsorship… and folks in the garage area on the idea this adjustment isn’t proof they’re a Nationwide Series version of Ginn Racing.

The new K&N East Series champion will be making his debut in the Truck Series this coming weekend at the Las Vegas Motor Speedway, and it’ll be one to take stock of. Obviously, it’s exciting enough to see the talent coming out of the East Series break into the upper echelons of NASCAR racing, but the equipment here is what’s worth taking a look at. Instead of driving for a powerhouse in Joe Gibbs Racing at the K&N level or Venturini Motorsports at the ARCA level, Gresham will be taking the wheel for Stacy Compton’s Turn One Racing operation.

Sure, Cole Whitt has done a solid job driving the team’s No. 60 truck as a rookie this year, but the same can’t be said for the team’s No. 66, which has struggled even more since Justin Marks and his sponsorship ran out midseason. In fact, the team hasn’t finished in the top 20 since Bristol, a plethora of one-race deals combined with start-and-parks keeping the team afloat.

Gresham’s got a big learning curve on his plate already given the high speeds of LVMS, the length of the race and that the teams will be getting a curveball in the form of an earlier start time (the Vegas race has typically been run at night). Having to adjust now to a truck that will likely be midpack at best is going to shed a lot of light on just how ready for the big-time Gresham is. Still, whatever happens making his Truck debut in this fashion will be a valuable move for the JGR prospect, regardless of what the stats sheet says.