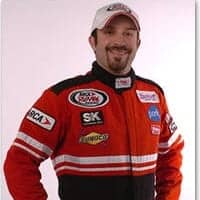 _Jeremy Petty is a successful third-generation modified driver from Smolan, Kansas, who has competed at several tracks all across Kansas, Oklahoma, and Nebraska. At one point, he won 17 straight feature races and captured the points championship at J.R.P. Speedway in Tulsa back in 2004. Last weekend in Kansas, Petty was poised to make a big step, attempting his Nationwide Series debut with Fleur-De-Lis Motorsports driving the No. 68 Chevy in the Kansas Lottery 300. Unfortunately, the goal of making the race would not come to fruition, as Petty suffered a hard crash during a Friday practice session and the car was damaged beyond repair. Without a backup, the team was forced to pack up and head home. But before he jumped ship, Frontstretch.com’s Summer Dreyer jumped in the hauler to discuss the 29-year old’s racing career and plans for the future._

Summer Dreyer, Frontstretch.com: *How did you get this ride?*

Jeremy Petty: The crew chief’s name is Morris [Van Vleet], and he’s part owner in the car. I’ve known Morris for six or seven years. I used to do some Hooters Pro Cup testing with him. I’ve just always stayed in contact with him and he’s the one that helped me get that Truck ride at Darlington last year (finished 17th). He’s part owner in this car and we’ve been working all year to try and put something together; Burwell Construction agreed to come on board with us about two weeks ago and C&R Plating is on board with me again and those two guys kind of jumped on board to actually get us the funding to do this.

3rd-generation driver Jeremy Petty didn’t get to make his Nationwide debut at Kansas after a practice crash. His small team doesn’t have a back-up car.

Dreyer: *Are you going to be in any more races this season? What about 2012?*

Dreyer: *What are some characteristics of Kansas Speedway — your home track — that you like and dislike?*

Petty: Well, it’s just kind of a cookie cutter just like the rest of them. It’s better now, though. A couple of years ago it was just a one lane on the bottom type deal. My opinion means nothing, but I don’t think they should repave it. I think they’re making a mistake there because now it’s multi-grooved and it’s starting to get a little rough which helps for passing and stuff like that. But I’ve tested here a couple times. I’ve raced here a couple times, I’m familiar with the track so I’m hoping that helps me with the learning curve because I’m not familiar with the car, having never been in a Nationwide machine. That’s kind of one of the reasons — well, we got the sponsorship to come here was the main reason — but the other reason [to run Kansas] was I’ve raced here quite a few times (twice in ARCA) so that was kind of part of the determining factor to come here and race. But, I like it. If you’re slow, you can get out of the way and if you’re fast you’ve got lanes to pass people. It’s not like a Martinsville or a Darlington where there is no place to hide. That was part of coming here, too, is that we’ve got to keep it in one piece if we’re going to go somewhere else.

Dreyer: *How hard is it for a small, underfunded team like this one to get off the ground and become competitive?*

Petty: It’s really hard is just the plain way to put it. Our biggest race is to make the race. We feel that once we’re in the race, we’ll race pretty good. I think we feel like we can finish somewhere in the upper 20s. The biggest thing is tires to practice on, tires to qualify on, and we’ve got to make sure we’re fast enough to get into the race so if we do use up our tires in practice then we don’t have really good tires to race on and that all comes down to funding. It’s tough. Harvick, Trevor Bayne, J.J. Yeley, and Scott Riggs, those are all guys who have to qualify on speed. We’ve definitely got our work cut out for us.

Dreyer: *With this being your first Nationwide Series experience, are you nervous at all?*

Dreyer: *Is there any team or driver you communicate with or share information with?*

Petty: Robby Benton that owns the No. 09 car that Kenny Wallace drives for. I’ve known him since I was running ARCA and he’s always been real nice as far as if I have a question or sharing information type deal, Robby’s always helped me out. Justin Allgaier, I raced with him a lot in ARCA and always stayed in contact with Justin. Those are probably the two guys I’ll go to if I have questions about something.

Dreyer: *OK, now for the fun questions. Do you have any favorite BBQ in the Kansas City area?*

Petty: There is a hole-in-the-wall bar somewhere. I don’t know the name of it and I can’t tell you how to get there. But my buddy took me there once and they’ve got really good wings and he’s taken me there a couple times. It’s over by KU Med somewhere if that helps you out any, but most of the time if I come to Kansas City it’s on my way either to this racetrack to another game. I do go to some Royals games. I like the Royals. I’m a baseball guy. Other than that, though, I don’t spend a lot of time in Kansas City.

Dreyer: *What are some items that are usually on your shopping list?*

Petty: My wife does all the shopping. I don’t have anything to do with that. She cuts coupons and goes to websites and all that stuff. But, I like homemade pickles if that helps! I grow all the cucumbers myself, can them myself. Delicious! As far as shopping, though, no I don’t shop.

Dreyer: *So are you guys into extreme couponing then?*

Petty: _We_ are not. _She_ is! She DV-Rs the shows, the whole nine yards. If it saves me money, though, I’m all for it! We’ve got two TVs, so I don’t have to watch it. I’m all for anything that saves us money, but she likes to shop and see how much money she can save. I don’t have the patience for it. Plus, I’m the type of guy to walk down the aisle and throw in a box of macaroni and cheese and GoGurt and stuff like that. Then, we don’t have a coupon for it. We quit shopping together pretty much…