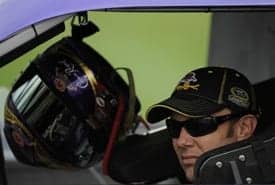 There are only six races left in the 2011 Sprint Cup Series season. Hopefully, fantasy owners reading this column have positioned themselves to make a run at the title. But with so few races left on the calendar, it might be time to make a fuel-only pit stop with 50 laps to go; or, in other words, go out on a limb to score big points.

Well there is no better place, except Talladega of course, than Charlotte to take a gamble. The 1.5-mile oval, somewhat unpredictable has many drivers who run well there historically that probably didn’t get you to where you are this season, but could be worth a look in these final races (see *Joey Logano* and *David Reutimann*, below).

Many owners will be reluctant to roll the dice at this point in the Chase, but playing it safe probably won’t win the title, either. If the top player in your league sticks with hot drivers as of late like *Jimmie Johnson* and *Brad Keselowski* to avoid a bad week, you won’t be gaining any points by doing the same.

So evaluate the risk/reward for each driver in your lineup, then make your move forward in the standings by taking an educated gamble on Saturday. You won’t regret it…

*Matt Kenseth* started 19th and finished 14th in the Coca-Cola 600 this spring. Those are average numbers, but he should be at the top of your fantasy lineup this weekend and here’s why: Kenseth led a race-high 103 circuits and lost the race on strategy, not speed. That 14th-place result was also the first time Kenseth finished outside the top 10 at the track since 2008. Kenseth has the third-best average finish (8.4) at Charlotte among Sprint Cup drivers over the last five races, spending significant time up front in two of those events – he’s due to cash in. And if that’s not enough to sway you, consider this fact: the No. 17 had a dominant victory under the lights at Texas on April 9, Charlotte’s sister track. A repeat performance may be in store for Saturday.

Matt Kenseth may just be the best “going against the norm” pickup for your fantasy team this weekend at Charlotte.

*Kyle Busch* started 21st and finished 32nd at Charlotte back in May. But, like Kenseth that ugly ending didn’t represent how well he performed; the No. 18 Toyota led 55 laps before wrecking out in the race’s closing stages. That 32nd-place result, in fact marked the first time Busch has finished worse than eighth at Charlotte since joining Joe Gibbs Racing in 2008. Last year, he was second and third at the 1.5-mile oval and led more laps (253) than anyone else, continuing a recent trend. Here is the stat of the weekend: Busch has spent time up front in nine of the last 10 races in Charlotte, leading for double-digit totals in five of those events. So don’t let the spring results fool you; Kenseth and Busch will run at the front on Saturday night.

Only three drivers have recorded top 10s in each of the last five races at Charlotte. One is Kenseth. The other two might take a little longer to guess. Yep, it’s midpack runners *Joey Logano* and *David Reutimann*. What might even be more surprising is that Logano and Reutimann have a better average finish than Kenseth in those races, too. In fact, the Toyota drivers have a better average at Charlotte since 2009 than anybody else on the circuit. Logano is first, clocking in an average of 7.4, while Reutimann is second with an average of 7.8.

An alarming stat on this set of mid-level drivers is that they’ve combined to lead only 11 laps in those events. Even more concerning for owners has been the inconsistency of the No. 20 and No. 00 teams all season. Logano finished two laps down in 29th at Kansas, a dreadful performance and Reutimann was never even given a chance – he finished eight laps down in 35th after mechanical failure early in the race. So will the trend at Charlotte continue or will the trend of 2011 trump past history? Picking them will certainly be a roll of the dice.

Much like the drivers mentioned above, *Kasey Kahne* has struggled with consistency in 2011. However, once The Chase began, the No. 4 team turned a corner despite likely team foreclosure looming. Kahne was fourth at Dover and second at Kansas, flexing his muscles on the driver’s biggest strength: Charlotte-style intermediates. Kahne is hungry to get a win for Red Bull Racing before bolting for Hendrick Motorsports next season; the way things are trending, he just might do it before the year is out.

Some of Kahne’s recent finishes at the 1.5-mile track are deceiving. He was 22nd in the spring, but Kahne was the leader when all hell broke loose on the final restart and led 28 laps in the race. He also had problems in the Fall of 2010 and finished 38th. In the three Fall races before that, Kahne was third, second and eighth. That means if any driver is going to break up The Chase party (9 straight playoff races have been won by Chasers), then it will probably be Kahne.

*Regan Smith* was gifted an eighth-place finish in this year’s Coca-Cola 600, but Charlotte has been one of his best tracks. He was 13th and 19th in 2010, and Smith has a better average finish at Charlotte (16.40) than at any other place he’s run on the circuit.

Tony Stewart and Darian Grubb have yet to figure out the ins and outs of Charlotte since being paired together as driver and crew chief.

*Tony Stewart* has three consecutive top 5s at Charlotte… in the All-Star race. But the results haven’t carried over to when the races really count; Stewart has been all but abysmal at the venue. His best finish since moving to Stewart-Haas Racing in 2009 is 13th, registering it in the fall of that year at Charlotte and hasn’t come close to sniffing the front since. 17th and 21st in his last two starts at the oval, there are far better selections at this top-level value than Smoke.

To say that *Dale Earnhardt, Jr.’s* almost victory in the Coca-Cola 600 was a fluke might be an understatement. When Earnhardt, Jr. crossed the line in seventh, that was his first top-10 finish at Charlotte since 2008. The North Carolina native has run especially poor in the Fall race. He was 29th in 2010, 38th in 2009 and 36th in 2008… which means the No. 88 is a number you should avoid on your roster Saturday night.