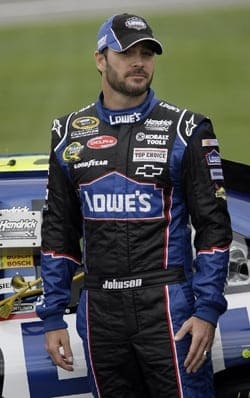 *Does Jimmie Johnson’s win show us a potential flaw in the Chase?*

Jimmie Johnson’s not-so surprising win at Kansas has certainly flipped the Chase on its head, hasn’t it? Just like that Johnson and the No. 48 team, yeah, that five-time champion No. 48 team, is back in the championship hunt, just four points out of the series lead and heading to a track where Johnson has six career wins. But even when Johnson was tenth in points through the first two Chase races, didn’t we all see this coming? Are we really all that surprised? It’s no secret that this team has the Chase figured out. They know what they have at each of the Chase tracks and they don’t panic when they struggle. The end result is a story we’ve seen play out five times already, and if the first few chapters are any indication, we may see again. And that brings up one potential flaw of the Chase.

Jimmie Johnson has seemingly returned to form after a dominant weekend at Kansas. If he is topped this season, it will not come as the result of a magazine cover “curse.”

By in large part keeping the venues the same, you risk the possibility of having one driver or team, in this case the No. 48 team, going on a multi-year run. If one team gains an edge at the majority of the Chase tracks, they maintain that advantage until another team catches up. With Johnson we don’t even know for sure if any team has caught up in six years. This brings up the age old debate of whether NASCAR should alternate its Chase tracks. Should the series put its twelve drivers on an equal playing field each year with a new batch of tracks? Or does the one team that figures it out (the No. 48) deserve the right to enjoy the success they rightfully worked for?

*Should Jimmie Johnson be concerned about the Sports Illustrated cover jinx?*

Now that he has that one win out of the way and is easily within striking distance of the points lead you can’t help but get the sense that the only person that can beat Jimmie Johnson is Johnson himself. With Talladega and the possibility of the big one right around the corner that’s certainly a possibility, but perhaps there could be one other factor preventing Johnson from another title: the Sports Illustrated cover. The notorious SI cover jinx has long been considered a bad omen in sports circles, something which holds some weight considering how superstitious athletes are. But the only way the cover jinx can affect Johnson is if he’s thinking more about the curse than racing, and that surely isn’t going to happen.

In fact, Johnson’s already been on the cover before, multiple times, and that surely hasn’t prevented him from winning championship after championship. Johnson has established himself once again as one of the drivers to beat, but if his streak ends this season, it will be because another team and driver finally caught up to Johnson and the No. 48 bunch, not because of some curse.

*Is this the biggest race to date of the Chase?*

Four races through the deepest Chase ever, the playoffs head to a critical juncture this weekend. With the Sprint Cup wildcard on deck at Talladega next weekend, followed immediately after by the short track at Martinsville, and the new Chase wildcard at the newly repaved Phoenix two weeks later, Charlotte provides teams with one last chance to build up a cushion before the intensity and pressure truly picks up. It’s no surprise that almost, if not all, of the Chase teams will likely run well at Charlotte. That makes the slightest mistake more intense, and the pressure to win that much greater. As the number of weekends dwindles down it may also be a last chance for some of the drivers that may have seen their Chase chances slip away over the last few weeks. The ingredients are all there.

*Is there a clear-cut favorite this weekend at Charlotte?*

Going into this weekend’s race at Charlotte, it’s easy to get a read on who’ll run well and who won’t. It doesn’t take much to figure that the top 10 will largely consist of Chase drivers and somewhere in the top 5 will most likely be Jimmie Johnson and Carl Edwards, maybe there’ll be a Jeff Gordon or Matt Kenseth sighting. But while it’s easy to figure out who’ll be competitive, it won’t be quite as easy to figure out the favorite. In the eight 1.5-mile races this season there have been eight different winners, making this weekend quite a crapshoot as the Chase picture starts to take shape.