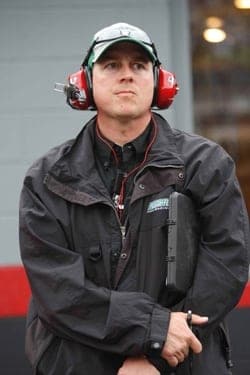 Matt Kenseth’s Sprint Cup team has often been referred to as the “Killer B’s.” One of the fastest crews on the circuit, the “murderer’s row” of speedy mechanics often nets the No. 17 Ford up to half-a-dozen spots, crucial in today’s world of parity where track position often tips the scales towards getting to Victory Lane.

Looks like the powers that be in NASCAR have taken notice. Mechanix Wear, who offers the prestigious Most Valuable Pit Crew Award has bestowed their 3rd Quarter honors on the No. 17 crew, headed by pit instructor Andy Ward. The team’s long history of impressive performances have stepped up a notch in the past few months; they posted an average pit stop time that was in the top-8 five times during the third quarter, putting Kenseth in position to win at Chicagoland (second best pit stop time), Bristol (sixth, where the No. 17 led 110 laps), and Indianapolis (seventh, helping the team lead 10 circuits) among other outstanding performances. Kenseth wasn’t able to cash in on Victory Lane during that stretch – a fifth overall at Indy was the best he could do – but the extra positions gained by his crew helped solidify a seventh postseason bid in eight tries.

Andy Ward, a pit instructor for almost 15 years has helped steer the No. 17 team to the Mechanix Wear 3rd Quarter Most Valuable Pit Crew Award.

How does the Ford team pull off their success? Much is attributed to the mental philosophies employed by Ward, 38, who’s already won a championship with Kenseth’s team in 2003. The former physical therapist-turned-pit instructor is convinced it’s the head, not the heart which separates the ability of pit crews to perform in an era where parity runs rampant.

“Very few teams have a clear-cut advantage,” Ward explained. “What separates them is which [team] can adapt the most to adverse conditions. It’s a nip and tuck thing.”

“Super athletes can perform in the parking lot but when it comes time to race they fold. It’s all about being able to control your emotions; people who live for the spotlight, seek it and perform in it.”

That success in the face of added pressure helps give Kenseth added motivation; in fact, the driver won the American Ethanol Green Flag Restart Award at Kansas, a $5,000 prize given to the eligible driver with the fastest average speed on restarts. Crew chief Jimmy Fennig’s over-the-wall crew consists of jack man Cameron Cobb, from Washington, Ill.; front tire changer Justin Nottestad, from Cambridge, Wis.; front tire carrier Joe Crossen, from Salisbury, N.C.; gas man Shawn Ward, from Hickory, N.C.; rear tire carrier Ryan McCray, from Highland, Calif. and rear tire changer Jon Moore, from Gainesville, Fla. Each man will also receive $5,000 for being honored by Mechanix Wear, making them eligible for the $100,000 big prize at the end of the season (the No. 18 and No. 29 teams, from Joe Gibbs Racing and Richard Childress Racing, respectively, have also won).

The one name not listed for Kenseth is Robbie Reiser, his former crew chief and now Director of Competition for Roush Fenway Racing. But make no mistake, Ward and the No. 17 team still get a great deal of motivation and support from their former colleague.

“Robbie’s still here and he’s our boss. He sets the tone,” Ward said. “He’s no-nonsense, blue collar. If you’re doing a good job, you don’t hear about it. That’s what you’re paid for. His level of expectation is unmatched.”

Those high standards are evident the second you talk about Ward’s 2011 season goals. While the Mechanix Wear Award – one of several weekly contingencies NASCAR offers – is a prestigious honor, it’s just one stepping stone in a road Ward and company hopes ends with a second Cup championship.

“We lost both tire changers from the previous year and we came back and won with the next group,” he said. “I’d like to see us put this team over the top (for the championship). It would be a dream come true.”

The No. 17 pit crew, along with the other recent contingency winners will be presented with their award prior to Saturday night’s Bank of America 500 at Charlotte. Miss out on the other top performers? Here’s a list of who captured these awards last week, each one a crucial part of the sport’s Prize Money & Decal Program giving back to teams producing exceptional performances:

*DirecTV Crew Chief Of The Race ($5,000):* Bob Osborne (Carl Edwards’ crew chief). Osborne helped engineer a miracle comeback, bringing Edwards back from a lap down with a setup that helped the No. 99 charge to fifth by the checkered flag. That puts the team out front in Sprint Cup points heading to Charlotte.

*Moog Chassis Parts Problem Solver Of The Race Award ($5,400):* Shane Wilson, Clint Bowyer’s crew chief. An improvement of 0.138 seconds per lap, from the first half of the race to the second allowed Bowyer to wind up seventh in the race.

*Sunoco Rookie Of The Year Award ($1,500):* Andy Lally. Lally was the only eligible rookie to make the field for the Kansas event and ran 37th.

NASCAR’s After The Lap in Las Vegas, one of the highlights of Champion’s Week now has tickets on sale for just $20.

P.S. – “As we wrote about two weeks ago,”:https://frontstretch.com/money/35730/ remember you can now buy NASCAR’s After The Lap tickets out in Las Vegas! Held at the Hard Rock Hotel & Casino, it’s one of the highlights of Sprint Cup Champion’s Week with a no-holds barred, Fan Q & A involving the top 12 drivers in this year’s Sprint Cup Chase. Scheduled for 4:30 PST on Thursday, December 1st and sponsored by Coca-Cola and Ford Motor Company, it’s the best way to get to know your favorites on another level in a laid-back, enjoyable environment.

Tickets, which can be purchased at “NASCARafterthelap.com”:http://www.nascarafterthelap.com for $20 also do their part to help those in need. Proceeds will benefit The NASCAR Foundation, a non-profit organization supporting children’s charities across the country.

Of course, not everyone will be able to make it out to Nevada; but for fans unable to attend NASCAR After The Lap, NASCAR.com will be offering a live Webcast of the event. SiriusXM NASCAR Radio will also broadcast live, on location through their NASCAR Radio Channel 90.