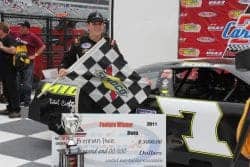 _Clint King and Brennan Poole may not be two household names you know about… yet. But as ARCA moves on from the 2011 dominance of Ty Dillon, searching for new stars to infiltrate the series in 2012 this duo are prime candidates to make a breakthrough. Learn about the youngsters, their future and the transition from the UARA to this next-level stock car series in another layer of our championship weekend coverage from Toledo._

Bryan Davis Keith, Frontstretch.com: We’re here with Clint King and Brennan Poole. Clint is ticked that he’s ninth on the board, and that Brennan is first. How much different is it going from UARA rivals to teammates in an ARCA race?

Clint King: It’s quite a bit different, coming into an ARCA race. At the UARA races, we are complete enemies. Now we’re just partial enemies. Now we can talk about the track, the cars, they’re all coming out of the same shop now. Everything’s supposed to be similar, so we can have some communication between the drivers to use to our advantage.

Keith: How much of an advantage is it coming from a similar background in similar cars?

Brennan Poole: I think [it helps because] we can discuss things together, and point out things that other guys might not know. Our background is in perimeter race cars, and these are perimeter race cars. There’s a lot of similarities. We both went to our first test together in an ARCA car at Motor Mile, we’ve taken some of the same steps together while we’ve been racing against each other. Now we’re here, and we’re trying to get better and work together as a team. We’ve been having fun through this whole experience.

Keith: You’ve both been successful on track so far, Clint’s won two poles, Brennan won the spring Salem race. You’re both here to learn, but you’re winning poles, winning races. How do you balance growing expectations with the reality of driver development?

King: Well, our late model stuff this year wasn’t that great. We put this deal together early this year to do a few races, and to come in, win the pole at Madison and finish third, win the pole again at Salem…it’s given me a lot more confidence [after the late model struggles]. To come here with a good team and a good car, know that we can run up front. It’s a boost of confidence and a lot of knowledge. They’ve got a great group of people here at Venturini Motorsports.

Poole: I’m running UARA as well, and I’m leading the points with three races to go. We’ve had a heck of a year. I won my first ARCA race, ran really well at Pocono, ran pretty well at Iowa, we’re running pretty well here today. Running well here is a huge boost of confidence, it helps me when I go back to run UARA. We struggle a few races in UARA, come here and run well, we go back to UARA and feel better about ourselves. ARCA is a great series because you get to go to a lot of the big tracks and learn. I mean, there’s stuff this year I got to do I never thought I’d get to. I got to test at Michigan, I got to race at Pocono. That’s like a dream come true, you see your heroes racing out there. It’s a great feeling.

Keith: What are your impressions of the Toledo Speedway?

Poole: Toledo reminds me a lot of Hickory actually, and Tri-County. The late model stuff, we got to race on so many tracks with UARA where you learn stuff that can apply here. UARA has helped me a ton, I was surprised how much it helped me when I first got into an ARCA car.

King: I agree with Brennan. It’s got the general appearance of Tri-County in North Carolina, but it’s a lot like Hickory. It’s a lot faster than you think it would be. As for UARA, the touring aspect really helps a lot, having to go to different places and adapt. It helps a lot in these deals, because you don’t get a lot of practice. Plus, the longer races at UARA bring in tire conservation and the like.

Keith: This is a televised race, a rarity for ARCA’s short tracks. Does that enter your mind at all coming into the weekend?

Poole: Being on TV is great. I think that’s part of the reason a lot of guys come to ARCA, to try to get some exposure. But we just have to take it like any other race. And have fun. That’s what this is about, having fun. I think these days, a lot of people take racing too serious, but this sport started back in the day running away from cops. It’s gotta be about having fun.

_Clint King wasn’t able to win his third consecutive pole, but kept a clean nose to score a seventh-place finish. As for Poole, Brennan served early notice that he’ll be a contender for the championship in 2012, using the bump-and-run on 2011 champ Ty Dillon to take the lead with two laps to go before being wrecked on the final lap. He finished 16th._