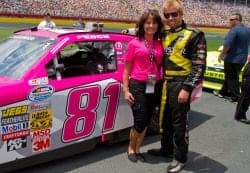 It’s Friday afternoon in the NASCAR Nationwide Series garage at Charlotte Motor Speedway, and teams are preparing their racecars to make their qualifying runs for the Dollar General 300 Miles of Courage. The track is awash in pink in honor of Breast Cancer Awareness Month, and several racecars and drivers are decked out in various shades of pink for the occasion. One of those is the No. 81 MacDonald Motorsports entry, sponsored by Daystar.com and driver Blake Koch. Koch is in a heated battle for Rookie of the Year honors, but he’s not thinking about that at the moment. He’s waiting on some others for a weekly Bible study, and while he waits, he navigates a sea of pink surrounding his team’s hauler. Koch himself is displaying a bright pink t-shirt as he relaxes in the lounge.

For Koch, this race is personal.

While many drivers race the pink paint schemes at the request of sponsors or NASCAR, Koch races his for his mom, Angie, who has survived two bouts of the disease. He’s proud to be able to help raise awareness of what families go through.

“NASCAR made this race the pink race and Dollar General was on board,” says Koch of the night’s event. “But what makes it really close to me is that my sponsor was kind enough to make my car pink and give up their traditional blue colors. Daystar being willing to do this and support my Mom and every other breast cancer survivor or everyone struggling with breast cancer, just the awareness is huge for me. It’s really important to me that they let us do this kind of stuff.”

Angie Koch was originally diagnosed with breast cancer when Blake was 20 years old. Having lost her own father to cancer, she didn’t want her son to go through the pain that she did. So at first, she didn’t tell him of her diagnosis. When Angie did finally reveal her illness, Blake’s first reaction was one of complete shock and sadness.

“I felt like my life was over when she had breast cancer,” he said. “I just didn’t think there was any other way than just that she had cancer and that was the worst thing in the world and nothing was going to be good.”

For the young driver, Angie has always been an inspiration. At first, she pushed him in his endeavors, but now she supports him in a way that only she can.

“She’s been a great mom. She’s been supportive of everything I do as long as she can see that I’m putting 100% effort into it,” Blake reminisced. “As long as I’m committed 100%, she’ll be alongside me and support me all the way no matter what she has to do. It’s also great because now I’m at the level where she’s helped me get here–my whole family has–and now that I’m here, I need a different kind of support. I don’t need them pushing me to go faster or pushing me to train and work out; I do all that on my own. So now I just have her support of giving her a phone call and having her talk to me about life in general and not racing.”

“My whole life’s based around racing, so it’s just nice to talk to her and talk about love and how much she misses me and not how I did last week at the race track.”

Blake would soon discover that the fight against cancer is not one that can be fought alone. He and Angie turned to each other and to other family members for the support they so badly needed. When Angie began to lose her hair from the chemotherapy and had to shave her head, Blake shaved his, too. He says that many people don’t realize that family members of cancer victims need support just as badly as the victims themselves. So, Blake and Angie turned to each other.

“It’s so great to have her here,” he exclaimed. “Family members need just as much support as the person going through it. Being that it’s my mom, she had to help me get through it more than I had to help her get through it. My mom was like, she wouldn’t call me if she was feeling bad, because she didn’t want me to hear it in her voice. She’d make sure she was strong when she called me and when I saw her. She was a big help to me for sure.”

Thanks to the treatments she received, Angie was cancer-free for five years. His mother’s illness had a profound effect on Blake’s faith as he watched her battle to get to that point. He says that he didn’t turn to God immediately, but eventually, his faith became a source of strength.

“Shortly after (the diagnosis), I turned right to prayer and asked God to take control and to heal her, and He did. The timing was there; right when she was going through the breast cancer, I was growing in my faith.”

That faith has continued to grow, and Koch regularly participates in Bible study at the track. It’s a way for the young driver to focus in the midst of a chaotic weekend.

“There’s a great group of guys here at the track who we pray with each other and keep each other accountable and stay with the word,” Koch said. “We all need it. It’s a crazy sport and a crazy world and we need each other!”

Even after a five-year remission, though, Angie received a devastating blow earlier this year: during a routine exam, her doctor found two new lumps, and the frightening journey started all over again. A biopsy confirmed the return of cancer, and Angie had a difficult choice to make. With the encouragement of her son, she had a double mastectomy, and has been cancer-free since. For Blake, his mother’s strength has proved inspirational.

“She was at my race in Darlington two weeks after her double mastectomy,” he explains. “She’s there for me all the time and she helps me get through it probably more than I help her get through it, even though she’s the one going through the battle.”

The battle, for now, has been fought, but Angie’s victories were not quite complete. Cancer victims, especially those who have been recently diagnosed, fear the unknown. For many, the word “cancer” is synonymous with a death sentence, though the survival rate is getting better all the time and many, many women join the ranks of survivors each year. Angie and Blake know first hand the fear that the diagnosis brings, and wondered if sharing their story might help other victims and their families by giving them some hope. So, in hopes that they might help make a difference to someone else going through the terrifying journey, Angie and Blake made a video about their story. It tells of how difficult and scary those days were for both Angie and Blake, but also of how each emerged on the other side a strong person.

“(Making the video) was definitely more difficult for my Mom than it was for me,” Blake said. “I like sharing every kind of struggle I go through in life with other people because maybe they can gain something from that, maybe have some inspiration, some hope, maybe see how I do some things to get through struggles, but for her it was her first time talking about it in public, and it was on live television, too. It was probably more difficult for her, but it ended up impacting so many people who were going through the same struggles that she’s glad she did it.”

The video had an immediate impact. NBC picked up the story and took it national, bringing it to an audience of millions. “That was cool,” Blake said of the airing, but this day, he’s just glad to have Angie with him at Charlotte Motor Speedway.

“It’s just really cool that she could be here this weekend with this pink race and her being a survivor and going through a double mastectomy five months ago. So, she’s 100% now, but it’s been a recent battle.”

On this day, the race seems almost secondary to the message of awareness that the Kochs hope it brings to people. For many drivers, it’s a cool thing they do once a year, but for the ones who have experienced the disease first hand (like Koch, Elliott Sadler went through his mother’s battle with breast cancer), it means a lot to be able to reach out.

On this day, even the Rookie of the Year battle seems insignificant, though winning the honor would certainly be a big step in Blake’s career. The message the pink cars are sending overshadows it, makes it a bit trivial, even.

Koch is also running with a new teammate for only the second time tonight. Reed Sorenson is a veteran racer, though he’s actually several months younger then Koch, and Koch says that Sorenson can provide the team with some valuable feedback.

“I’m not to sure yet,” responds Koch when asked what Sorenson brings to the table. “Reed’s been doing really good in our cars and helping our program. You can see the results we’ve had over the last couple of weekends. He’s here for a reason. I haven’t been able to talk to him other than about what the racecar is doing, so I haven’t gotten to know him as a person yet, but he seems like a really nice guy.”

Sorenson is also running a pink car as he has often done in the past. Plus, it’s shaping up to be a good weekend for Koch and his team.

“It’s the best the Daystar.com car has been all year,” says the driver with a grin.

He will go on to finish 18th in the race, good enough for Rookie of the Race. But right here, right now, that’s not what Blake Koch is thinking about. He’s simply hoping that his mom’s story will help someone and waiting for his Bible study to start. Koch is a racer, and later, he will put on his game face, strap into the car, and drive it like he stole it for 200 laps. But right now, he knows that some things supersede the sport…like surviving. Like his mom. Like helping others in the fight of their lives.