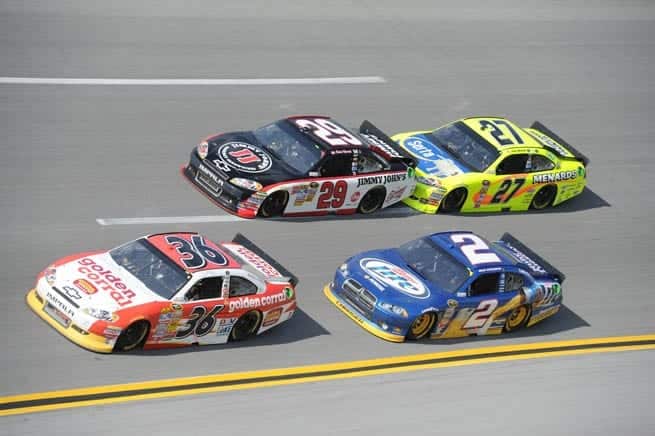 Talladega. The great equalizer, in addition to being cursed, dangerous, and depending on who you ask, built on an Indian burial ground. Sunday was one of the tamest events seen on the high banks in recent memory, but just as with any plate race, the finishing order was jumbled…and the usual suspects didn’t dominate the proceedings at the front of the field. Part-timers in the top-10. Cars outside the top-35 leading laps. And NEMCO Motorsports busted out a second start-and-park car. The wrecks were less plentiful, and NASCAR’s rule changes didn’t do a damn thing to discourage the much-maligned (and deservedly so) tandem racing, but when 500 miles were done, plate racing came to the underdog’s grace once again.

Dave Blaney and Brad Keselowski worked together to get Tommy Baldwin Racing their best-ever finish on Sunday. Photo courtesy of Phil Cavali of TheHotLap.com

It was a strong run at Talladega back in the spring that landed Dave Blaney and Tommy Baldwin Racing a nearly full-time sponsorship from Golden Corral. And the return to that track resulted in TBR’s best run in team history. Blaney, who worked out a deal with Brad Keselowski on Friday to draft all day, proved a worthy companion Sunday afternoon, and in doing so led his first laps since Indianapolis en route to finishing third. Blaney’s third-place result was his best finish since the Carolina Dodge Dealers 400 at Darlington in March, 2003, breaking an ugly streak of six consecutive finishes outside the top-35 for the No. 36 team. What’s more, as the car’s tailgate has said for months…top-10 finish, kids eat free at Golden Corral. Yeah, shameless inclusion of a sponsor plug, but hey, TBR deserves it. One can only hope their backers come back for another round in 2012.

For whatever reason, Daytona and Talladega never cease to make Michael Waltrip look like a superior race car driver. Making only his third start of the 2011 season, Waltrip ended up carrying the flag for Michael Waltrip Racing…even after Martin Truex, Jr. and David Reutimann managed to hook up in a tandem late in the running. His ninth-place result was his personal best in two years. More notable, it was his first top-10 finish driving a No. 15 Cup car since Michigan way back in 2005.

David Gilliland came into this weekend with the highest average finish in restrictor plate races in 2011. A notable accomplishment in two regards; one, Front Row Motorsports isn’t exactly a powerhouse at the Cup level and two, Gilliland has always found drafting help not affiliated with his team. However, Gilliland’s partnership with Tony Stewart disappeared thanks to a Ford edict that the Blue Oval drivers stick together on race day. As a result, Gilliland ended up working with teammate Travis Kvapil this Sunday. The 22nd-place result that Gilliland got out of the partnership was his worst of 2011 in a plate race…but Kvapil coming home 21st got the No. 38 team back into the top-35 in owner points after Andy Lally’s crash. The instructions from Ford may have moved Gilliland and the No. 34 car back to mid-pack this Sunday, but this race was a major victory for FRM as an organization.

Robby Gordon’s No. 7 Cup team hasn’t run the distance since Watkins Glen back in August, but none of that rust showed at Talladega. Hooked up with a part-timer in Trevor Bayne that had no shortage of horses under the hood (nor, apparently, restrictions as to who to draft with), Gordon led double digit laps (ten) for the first time in a Cup car since Sonoma way back in 2007. A good result wasn’t to be though. Gordon and Bayne were running in the top-5 mid-race before the rear bumper of the No. 7 car popped up, forcing Bayne to lay off on the bump-drafting and dropping the pair out of the top-15. 15 laps short of the finish, Gordon’s rear-end reportedly failed, and the result was a 37th-place result…only two spots better than they would have earned start-and-parking.

Regan Smith and the No. 78 team’s magic touch on NASCAR’s crown jewel tracks was nowhere to be found on this Sunday. Inside of ten laps to go, a bad move by Mark Martin trying to reform his drafting tandem with Jeff Gordon sent Smith hard into the fence. The fireworks weren’t done for Furniture Row either; emptying the fuel cans post-race, a fire broke out near the team’s hauler (what is it with the No. 78 team and destruction surrounding their haulers?) Fortunately, as of the time ESPN signed off their telecast, there was no damage or injuries reported as a result of the fire.

The team that Talladega proved most destructive to was TRG Motorsports. Following the Ford edict, Lally was paired up with Terry Labonte and the No. 32 car. On lap 163, that partnership went sour. It was hard to tell from the camera angles whether Labonte hit Lally poorly in turn 3 or if the No. 71 car was out of shape entering the corner, but the damage was done either way. Lally slammed the turn 4 wall and ended his day in the 39th position, dropping his team from the race…and out of the top-35 with only four races left in the season. Be looking for a driver swap at Martinsville, as missing races will not be an option from here on out for TRG.

Dave Blaney finishes third, no less than five underdogs score top-20s and sans TRG, most of the small guys avoid wrecked cars. Guess there’s a few benefits to plate racing after all.