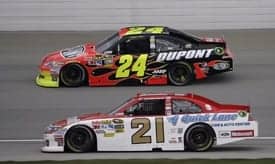 *Did You Notice …* That yet again, Jack Roush and his public relations team got to doing damage control way too late in the game following the much- ballyhooed story of Ford’s team orders edict for Talladega … a storyline that came to a head when? Rewind back to Pocono in August, after a month-long saga regarding Carl Edwards and his contract negotiations. After this episode lingered for the better part of the summer, with the No. 99 team lagging and rumors running wild that Edwards would be leaving the team that gave him his break for Joe Gibbs Racing, the contract finally got signed. And the story got out of hand again, with exorbitant sums of money being thrown around as Cousin Carl’s new salary and theories abound as to what kind of stock options Ford offered him to keep him driving a Blue Oval.

That Friday at Pocono, an awkward-at-best press conference saw Edwards refuse to answer anything that was a remotely insightful or pointed question, and Roush go out of his way to point to Carl’s qualities and mitigate anything that sounded like a contentious negotiation point.

Trevor Bayne has left Jeff Gordon behind before-but not under a cloud of suspicion like he found at Talladega.

That same tone of being two hours late to the meeting and saying ‘everything’s OK!’ is exactly the note that Roush managed to hit Tuesday when commenting on the team orders story that has become the headline of a quiet Talladega weekend.

“Of course, as in any team, we would prefer for our drivers to work together when possible” said the longtime owner. “However, to be clear, we did not micromanage or dictate to any of our drivers, nor any other Ford drivers, how to race with other drivers at Talladega last Sunday.”

Sure. That’s why David Gilliland suddenly broke away from working with Tony Stewart to run 20th with Travis Kvapil. That’s why the Roushketeers were about as inseparable as ESPN from a commercial break over the course of 500 miles. And that’s why Roush felt it absolutely necessary to come to the defense of Trevor Bayne, who ended up dumping his Speedweeks hero, Jeff Gordon, to help push Matt Kenseth to the finish after David Ragan lost an engine late.

“I’ve spoken with Trevor and understand that he was put in a situation requiring a split-second decision on the track and in his response to questions justifying his actions afterwards, where it was almost certain that not everyone was going to be satisfied” stated Roush of his talented prospect. “Trevor is extremely talented, but it is still very early in his career.”

Does anybody really buy that this would have been an issue had the Ford camp not drawn attention to themselves for days leading up to the race? Let’s do the math. Trevor Bayne wasn’t a factor for the win this time around, so he went out of his way to help the team he drives for in the closing laps. That might tick off Jeff Gordon, but its hardly a confusing move.

The moral to this story? Another nondescript event handled poorly by the House of Roush and Ford Racing. Carl Edwards went through a contract negotiation. But silence, time and then a pie in the sky recounting of the resolution ended up making this the soap opera of the 2011 season.

Now, plate racing with teammates became instructions, limitations on the playing field, and a strategy that didn’t even work (not a single Ford finished in the top 10). With public relations like these, is it really a wonder this team can’t keep sponsors around?

*Did You Notice …* That Cale Gale’s getting what’s likely a swansong with Kevin Harvick, Incorporated this weekend? The longtime development driver and mechanic for the organization is getting the keys to the No. 21 truck at Martinsville this weekend, a track that’s been more than kind to KHI over the years. On the flip side, truck racing hasn’t been so good to Gale in 2011; he’s cracked the top 15 only once in three starts this year and is coming off a DNF in Las Vegas.

Bad time for a cold streak. The reality is Gale has to make noise in this race, and not the “oh, he ran a solid 12th” type. Gale has to win, or factor in for the win, this Saturday, if he expects his career as a driver to go any further.

Gale has been remarkably fortunate to have KHI as an organization continually get him in the seat, using the team’s sponsorship instead of counting on Gale to bring the dollars in. Be it fielding custom-built ARCA cars over the summer or turning over championship-winning trucks, KHI has done a lot to keep the former ARCA winner in the seat. Problem is, that suitor is on the way out after this season.

The Nationwide cars are going to Richard Childress Racing, which between a title contender in Elliott Sadler and the ever-improving Dillon brothers, have a full stable. And as for the Trucks, which are going to Eddie Sharp…remember that Sharp already has a driver in Justin Lofton, ARCA drivers on the market he’s raced with in the past, and drivers like Nelson Piquet Jr. that have some sponsorship and history with the teams. Gale’s the odd man out either way.

KHI’s red hot right now. They know how to run–and win–at Martinsville. This may well be their strongest remaining track as an organization. Gale’s got to strike … now.

*Did You Notice …* How even with the points reset, the Cup title chase is still not as close as the Truck Series? Yeah, I spent all of “Tuesday’s column”:https://frontstretch.com/bkeith/36105/ observing the flaws of the Chase, but come on…it doesn’t get old, does it?

*Did You Notice …* That the Truck Series schedule still hasn’t been announced for 2012? The Cup schedule’s long been out, and the oh-so-momentous announcement that the Nationwide Series would contest a yawner at the Brickyard has passed, but there’s still a national touring series that doesn’t have next year’s schedule out … and there’s less than a month to go in the season.

That’s a nightmare scenario. This is a series that started the season with truck counts higher than even the Cup Series enjoyed for the Daytona 500, yet now has seen a steady decline (41 trucks are entered for Martinsville, a race that’s always scored higher-than-normal truck counts). The flagship team in this garage area is folding and merging into a mid-pack operation next year, while Kyle Busch’s team is sticking around for only a limited time (come on, it doesn’t take much to see that full-time NNS racing is in the near future for KBM). And with the exception of the return to Rockingham, the series schedule is running rampant with speculation that road courses and Gresham Motorsports Park could be in the running for events.

The problem with speculation? It’s hard to sell sponsors on that. And even though TV ratings for the series continue to go up for SPEED, those solid scores have still not translated into better attendance at the track, or sponsor dollars materializing on truck beds. Having the schedule in place means more than just allowing fans to plan travel … it allows those backers that keep the sport going to build marketing strategies that work, and race teams to sell the very same.

Even if its a partial release, why not put the dates that are booked out for public consumption? Again, as has been seen with the Roush stories previously discussed, speculation doesn’t settle anything. It merely exacerbates confusion and uncertainty.

Trying selling that to a sponsor.