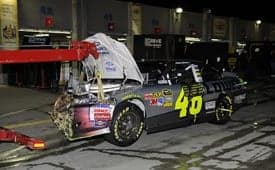 *Is Martinsville the only race between Carl Edwards and the Sprint Cup?*

Carl Edwards played the wildcard event at Talladega to perfection, finishing eleventh while a number of top Chase contenders fell by the wayside. The result now with just four races remaining is a solid, but not yet comfortable 14-point cushion over teammate Matt Kenseth. Edwards has been considered a favorite to unseat 5-time champion Jimmie Johnson all season, but just now has he been in a position where he can see the finish line. Of course, it won’t be that easy. While the schedule favors Edwards at three of the final four tracks, this weekend’s event at Martinsville could be the speed-bump that brings the competition back to the No. 99 team heading down the final stretch.

With just one top 10 in his career at the paperclip, this weekend is all about damage control for Edwards and Co. If he can pull off a solid finish in Virginia and maintain his points lead, he’s looking at Texas where he swept in 2008 and finished third earlier this season, then Phoenix and Homestead, where he won both of the November events one year ago. This is racing, and anything can happen. The No. 99 could run into trouble at any of the final events, or struggle to wrap their hands around the reconfiguration and new surface at Phoenix. But the championship appears, at least for one week, to be Edwards’ to lose.

Scenes such as those that transpired at Charlotte have not been seen for the last half-decade, demonstrating that 2011 may well be the end of the line for Johnson’s lengthy title streak.

When Jimmie Johnson and Dale Earnhardt Jr. failed to come from the field in the final laps at Talladega it essentially put an end to Jimmie Johnson’s title chances. It’s been easy to give Johnson the benefit of the doubt earlier in the Chase, but with just four races remaining a 50-point deficit, and more importantly six cars ahead of him, seems insurmountable to overcome. Johnson has proved his doubters wrong before and he’s had his share of success at the remaining four tracks, but there is a certain vulnerability we’re seeing out of the No. 48 team that we just haven’t seen before. Even Johnson himself seems to have accepted the fact that his championship run may be over. You can’t say for sure that Johnson is out of it, but if there is even the slightest doubt within the No. 48 team there will be another name instead of Jimmie Johnson engraved on the Sprint Cup in 2011.

*Did Jimmie Johnson and Dale Earnhardt Jr. make a mistake in hanging back at Talladega?*

Talladega – as most expected – has certainly been the turning point in the Chase. It’s allowed Carl Edwards to open up the biggest margin of the playoff to date this season and it’s put five-time champion Jimmie Johnson in a hole that few expected. What’s most surprising is the way that Johnson may have lost the title. In a conservative effort, Johnson employed the same strategy that paid off so well for Edwards, but Johnson and teammate Dale Earnhardt Jr. could not mount the same charge that benefited the current points leader. It’s easy to blame Johnson for the conservative strategy and label it a mistake.

But was it? Well, it’s not that simple. Obviously it didn’t work out, but we did see it work out for Edwards. So the strategy itself was not a mistake. But as Earnhardt Jr. stated during the race, he and Johnson easily had two of the better cars in the field and was convinced they had the cars to beat. That confidence, compared to the eventual finishing position can’t help but force you to second guess the decision. It’s easy to second guess, but there’s no way of knowing the two wouldn’t have crashed running up front either. Talladega is simply a crapshoot, and this past Sunday Earnhardt and Johnson came up on the short end.

As the Chase for the Sprint Cup moves one week closer to completion, the Truck Series is in the midst of a championship battle even tighter than the much more publicized Cup playoff. Despite no Chase format there are four Truck Series drivers within 16 points of the lead. Led by young gun Austin Dillon, fellow prospect James Buescher is just three points out, followed closely by veterans Johnny Sauter and Ron Hornaday, 14 and 16 points out respectively. While the Truck Series will never get the attention the more mainstream Cup and even Nationwide Series gets, this does bring to light that the Chase format isn’t necessary to provide excitement going into championship weekend at Homestead. The Truck Series has provided tight points battles time and time again, and even the Nationwide Series title could come down to the final race despite a playoff. If Carl Edwards continues to pull away from the rest of the Chase field, the Truck Series could be the series to watch at Homestead.