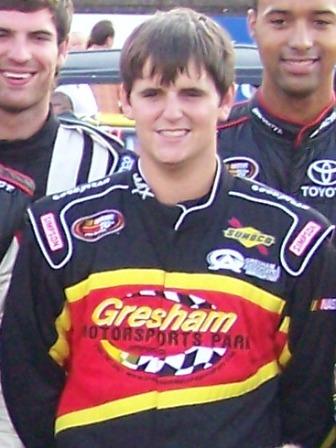 _Max Gresham is attempting to make his second career start in the Truck series at Martinsville this weekend (Note: on Saturday Gresham ran well and gained experience, clocking in 25th, two laps down by the checkered flag). During the rain delay prior to practice on Friday, he sat down with Frontstretch to talk about running at Dover for the K&N East Championship, “not working” at his family race track, and enjoying the outdoors along with discussing his future in the sport._

Max Gresham, fresh off his K&N East championship is hoping for bigger and better things to come his way in 2012.

Mike Neff, Frontstretch.com: *First of all, congratulations on winning the K&N East Championship. When you ran the last race of the season at Dover, how hard was it balancing the desire to win the race with making the car last to the end to win the title?*

Max Gresham: We went into that race with an attitude of winning it. We needed to win that race for ourselves and to win the championship. We didn’t get it, but we got the championship in the end and that is just as good for us. Last year, we went in and missed it and left some stuff there. We wanted to win it and were going to do what it took to win it and when we got down to the end. and our closest competition for the title had wrecked out it was no longer if we could win it – we were going to finish the race and with just a few laps left, the focus kind of shifted right there at the end.

Neff: *ARCA racing. You did a little bit of it this year, are you going to do a little bit more of it next year?*

Neff: *Is that so that you can get approved for Superspeedway racing?*

Max Gresham: It is really just to get the feeling of being on the track with that many cars drafting like that. I’ve never done anything like that before. I’d like to go into my first NASCAR race with some kind of experience racing like that so I don’t have to hit it cold turkey.

Neff: *This is going to be your second Truck race this weekend. What are you looking for differently this weekend then you experienced your first race and have you ever been to Martinsville before?*

Max Gresham: I ran the K&N East race here last year. I’m just looking to actually finish this race. I had a rough time at Vegas and it didn’t end up quite like I’d wanted it to. Here at Martinsville, I’m looking to get a really solid run and hopefully finish this one and try and go for a top 15 or maybe even a top 10, whatever I can get.

Neff: *People may not know where you started out your racing career. I know you ran some Super Late Model stuff and a little Late Model before the K&N East stuff but I have to think you started somewhere before that.*

Gresham, whose No. 18 Joe Gibbs Racing outfit edged Brett Moffitt for the K&N title is a rising NASCAR star at the age of only 18.

Max Gresham: I started in Bandoleros at Atlanta Motor Speedway when I was eight on the quarter-mile track over there. I worked my way from there to Legends and then on to Late Models to East cars and ARCA cars and now Trucks. I feel like I took a pretty common path, skipping the go-karts. It seems like a lot of kids are taking that direction these days, I just skipped the go-karts.

Neff: *On the Nationwide side, I read some rumors that you were possibly going to have a ride in the series this year. Did that not pan out?*

Max Gresham: I hadn’t heard any rumors on that side of things. We never had anything on our side that showed any kind of interest as far as Nationwide. Hopefully next year, we can get our feet wet in that. As of now, we don’t have any kind of plans for next year at all. We’re still working on some stuff and can hopefully get something to come together soon.

Neff: *Now outside of the car, not necessarily outside of racing, your folks own Gresham Motorsports Park. What do you get to do down there? Do you get to cook hot dogs, sell programs, anything fun like that?*

Max Gresham: No, we’re going down for the World Crown 300 November 10th through the 13th, just hanging out with friends, talking with people, meeting people. It is a great place to meet potential sponsors and show them ‘Hey look, we’ve got this awesome facility that we can put your name into.’ But, as a driver, it is going to be painful. I went last year and watched but I wish I could be out there racing with everyone – just can’t do it.

Neff: *As far as working around the track, do you ever get to help out or do they just let you do your own thing?*

Neff: *Now, I know you just got out of High School. Are you going off to college or just focusing on racing?*

Max Gresham: I tried to. I ended up withdrawing about a month ago. I am a very goal-oriented person and I like to try and hit my marks in everything I do and I just could not perform to the standards I expected of myself at the college level with as busy as I was in racing. So, instead of taking a failing grade in my very first semester of college, I decided it would be better for myself and my transcript if I withdrew for a couple of years or whatever and get organized and get some kind of future set in front of me and then, if the opportunity presents itself, to start up again.

Neff: *Now outside of racing and not working at the race track, what do you like to do for fun?*

Max Gresham: I’m a very avid hunter. I enjoy some deer hunting and fowl hunting. I also enjoy fishing, especially saltwater. I love to go deep sea fishing. I am an outdoorsy person. I like to be outside doing some kind of hunting or fishing or going for four wheeler rides, just being outdoors.

Neff: *If you weren’t a race car driver, what do you think you’d be doing?*

Max Gresham: I’d probably be in college at a college far away from home just trying to get away. I don’t really know what I’d be doing because I never really took an interest in anything. I was a pretty good wrestler in middle school. I might have tried to continue through that but, for the most part, just going to school probably.

_While Gresham is the 2011 K&N East Series Champion, he has no set plans for the 2012 racing season. He drove for Joe Gibbs Racing this season but has not had any dialogue at this point about getting into a car or truck in 2012. One thing is for sure, at 18 years of age, Gresham has a bright future ahead of him having already landed a major racing series championship. Wherever he ends up in 2012 he’ll certainly drive for all it is worth._