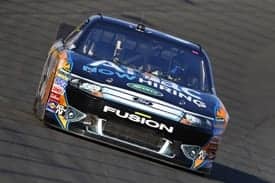 Everyone talks about Talladega being the wild card in the Chase, and as an afterthought, add Martinsville in as well.

But after Sunday’s TUMS Fast Relief 500, the order should definitely be reversed. In fact, if there’s any way to do it, put Martinsville on the schedule as the last race of the season.

That would pack ‘em in, for sure.

Carl Edwards survived Talladega and came to Martinsville with a 14-point lead in the Chase, but struggled and looked in the early going like he might lose every bit of that advantage.

The Chase chances of Matt Kenseth suffered a serious blow, Carl Edwards very nearly gagged up every bit of a 14-point lead and Brad Keselowski let a golden opportunity slip through his fingers.

And it was the wildest day in a long history at Martinsville, which is a track that was born racy and has gotten better with age.

It all got started seven laps into the race when Dale Earnhardt, Jr. clipped a curb heading into Turn 1 and center-punched Kurt Busch. That set off a crash that gathered about 25 cars, from start to finish, but didn’t do any serious damage to anyone in the Chase – at least by the end of the day.

“It was a little wild and we started off a little wilder than we normally do,” Earnhardt Jr. said at the end. “Those first 100 laps are usually kind of calm, but everyone was kicking it into high gear once they dropped the rag.”

That about covers it… because 46 of the first 110 laps were run under caution. Later on, it was as wild over the final 70 laps as it was the first 100 or so.

The upshot is, some drivers nearly rioted within the confines of the race. Brian Vickers was involved in most of the early crashes, including a spectacular one with Jamie McMurray and the biggest one late, with Kenseth.

In the first, Vickers sent McMurray hard into the Turn 3 SAFER barrier, totally trashing the No. 1 McDonald’s Chevrolet. It hit so hard with the rear that the battery assembly plopped out on the track as McMurray drove to the pits.

He got all the way around the track to pit entrance and took a swipe at Vickers as he went past, but whiffed and hit the wall again, ending his day. “I don’t have much power,” he called back to the pits, to which his spotter replied, “your batteries are out on the track over there.”

Normally mild-mannered Matt Kenseth lost his focus – and his cool – during Sunday’s wild race at Martinsville.

Vickers got into it with Kenseth late in the race as the laps were winding down. Fighting for position, Kenseth finally sent the No. 83 Toyota to the fence after an extensive tussle.

“He just kept hitting me in the door,” Kenseth said. “I mean, we’re at Martinsville and I gave him the bottom. Obviously, I’m not going to roll over and let him go with 40 to go or whatever it was and he just kept driving in harder and harder and he slammed me in the door at least five times and just ran me up in the marbles and I was just tired of it, so I spun him out.”

It was that kind of race from the drop of the green to the belated and welcome dropping of the checkered flag.

Jimmie Johnson had a feeling early, and it proved correct.

“From lap one or two, I could just tell it was going to be one of those days and I could see the crashes on the big screen there at the end,” he said with a shake of his head.

Kenseth was finally eliminated from competition in a crash that also took out Kyle Busch. Kenseth’s Ford was mangled and he finished 31st, dropping him from second place, 14 points out, to fifth, trailing by 36. Busch dropped two spots to seventh and trails by 57 points with three races remaining.

“I got under the 18 there, I honestly don’t know what happened,” he said. “I thought I left him enough room, so I don’t know if I slid up into him or what happened, but somehow we hit off of two and it cut my tire. Of course, that ruined my day, along with his and whoever else got unfortunately collected in that mess.”

If these sound like quotes that are usually attributed to action at Talladega, you would be correct, because they are. But at Talladega, things happen quickly. At Martinsville, they happen slower, and it still didn’t matter.

Edwards got a lap down on two occasions, yet was in position with the frequent cautions to get them back. He wound up ninth, and despite Tony Stewart’s victory managed to lose just six of the 14 points he had in hand heading to Texas.

Keselowski spun on the final restart, with help from a few of his friends, and wound up 17th, dropping him a spot to fourth in the points, 27 behind Edwards.

It was a crazy day, much crazier than at Talladega the week before.

Drivers were taking chances from the get-go, and it lasted 500 laps. Three-wide is fine at Talladega; at Martinsville, it’s a major no-no. Yet they were three-wide on the tiny .526-mile oval a good bit of the time, and the 18 caution flags — plus one or two that NASCAR didn’t wave — were the end result.

Drivers know it’s down to the nitty-gritty and it showed.

“Well, it’s time, man,” Earnhardt Jr. said. “That right there was basically, ‘hey, the season is running down and we are not going to be racing much longer,’ and I am going to miss it so I came to the buffet and got everything I could eat.”

“I drank a couple of AMPs before the race started and probably was a little bit too excited. I calmed down after awhile but that first 100 laps it was just… it was fun. I was having fun.”

Earnhardt Jr. is normally pretty shy in interviews, but he seemed to be, well, AMP’d after being a frog in a blender for 500 laps.

“Everybody that I think I ran over even got me back accidentally in one shape or form today,” he said. “I don’t know if they think we are all even but I ain’t really worried about it. If they want to come at me, come at me.”

There was plenty of post-race wrangling among some drivers, including Keselowski, Vickers and a few others. The NASCAR transporter had a revolving door after the event. This fracas isn’t over, and while there are no more short-track races left on the schedule this year, there’s still plenty of ways to get back at people.

They’ll find them, whether it’s at Phoenix or Texas or Homestead-Miami. Bad blood could last until Bristol or Martinsville in the spring.

Stewart, who won with a gritty final restart and some luck, had a solution to solve that after the craziness that was the TUMS Fast Relief 500.

“NASCAR is going to have to, at some point make these drivers be responsible for their actions amongst each other and not baby-sit and not protect these guys,” he said. “Let them get their butt kicked. That’s what used to happen in the old days. You didn’t have guys dumping each other and taking cheap shots like that.”

“You let a guy get his butt kicked once or twice, he’ll quit doing stupid stuff like that. I saw a bunch of it today out there. I think they ought to get a portable boxing ring. As soon as they get done with the victory celebration, set the boxing ring on the frontstretch, give the fans a real show they paid for. If you want to boost the attendance at Martinsville, have a boxing match with each of the guys that had a beef with each other.”

If that were to happen, Clay Campbell and ISC would have to put lights in, because the matches would last until midnight. Come to think of it, they might last into Wednesday…