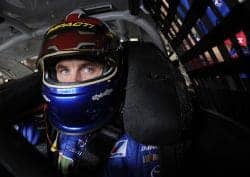 Twice every year, modern NASCAR returns to the only track remaining on the list from the original Strictly Stock schedule. With every visit to Martinsville, stock car racing’s every effort to become more efficient, more savvy goes out the window in favor of beating and banging. It’s another one of those tracks where the gap in equipment diminishes, where attrition can do crazy things to the running order at race’s end. This Sunday was no exception.

Casey Mears made it through Sunday’s craziness in order to post his best finish of 2011.

*Casey Mears* has never been synonymous with short track racing during his NASCAR career, but he looked right at home on the tight confines of the paperclip this Sunday. One of a myriad of drivers to suffer damage in a lap 7 incident involving Dale Earnhardt, Jr. and Kurt Busch, Mears restarted in the 28th position on lap 22 and didn’t stop moving forward from there. The No. 13 team avoided the remaining 17 cautions that would slow Sunday’s race and eventually finished in the 12th position. The result was Mears’ best at Martinsville since 2008 and the best the No. 13 team has had anywhere in 2011. It also marked the first time this year Germain Racing has posted consecutive top-20 finishes at any point on the Cup schedule.

*Regan Smith* wasn’t quite the roving pinball that Brian Vickers was, but the No. 78 car definitely took its share of licks over the course of 500 laps on Sunday. Nonetheless, the resilient Furniture Row Racing team did what they’ve been doing all season long and made something out of nothing. Despite getting the boot from Vickers on lap 27 and making hard contact with Mark Martin on lap 408, Smith battled home to finish 13th by race’s end, a career best at Martinsville and the best short-track result Furniture Row Racing has scored all season. There’s a real strong case to make for the No. 78 squad being the Sprint Cup surprise of 2011.

*Travis Kvapil’s* had enough bad luck and crashes in 2011 to last a decade…but he and the No. 38 team are catching fire right when it counts. A week after breaking back into the top-35 in owner points, Kvapil had arguably his best run in a Cup car since his days in the Yates Racing camp, scoring a 16th-place run on the lead lap. How big a deal was that position in the finishing order? It was a career best at Martinsville for Kvapil, only his second lead-lap finish in 2011, and a result that allowed Front Row Motorsports’ second car to significantly extend their points lead over TRG’s No. 71 team. Hermie Sadler finished 26th, meaning the margin between them sits at 13 with just three races remaining this season. On a not-so-positive note, however, the team’s jackman Sean Irvan was hit by Mark Martin on pit road and sent to the hospital with a concussion. Luckily, Irvan was released after X-Rays came back negative for more serious injuries.

*Ken Schrader* came home 21st driving for FAS Lane Racing in his first Cup start in nearly three months, his best result of 2011 and the No. 32 team’s strongest finish since the season-opening Daytona 500.

While again, it was *Brian Vickers* and his never-ending sequence of spins and crashes that earned the most airtime of any battered race car at Martinsville, both *David Gilliland* and *Mike Skinner* endured harsh accidents that their smaller teams did not need to take part in. Skinner, driving for Larry Gunselman’s No. 37 team that’s existed as a start-and-park only operation for the better part of 2011, got entangled in the “big one” on lap 7 and parked the car that same circuit, finishing 43rd. For as experienced a driver as Skinner is, he never can seem to escape bad luck in the later season Cup races; Skinner endured multiple wrecks filling in the later races both for R&J Racing back in 2005 and CJM Racing in 2006.

As for *David Gilliland*, his lap 361 spin and impact with the wall was among the harsher crashes seen this Sunday… and there were plenty of them to pick from. That being said, Gilliland’s No. 34 car was flat used up by the time he limped it behind the wall. It was just the latest in what’s been a disappointing second half of what’s been a strong year for Front Row’s flagship team; Gilliland’s best finish since Daytona in July was a 22nd at Talladega (which was his worst plate-track result of the season). The California native hasn’t cracked the top-20 since that Independence Day race weekend in Florida; he did that three times the first half of the season.

*Landon Cassill* and the No. 51 team endured their worst result of the 2011 season at Martinsville, heading to the garage on lap 34 and finishing 42nd courtesy of “brake” problems that was clearly a start-and-park (the team had just one set of tires sitting in their pit prior to the green flag). Phoenix Racing has never been bashful to S&P at the Cup level (owner James Finch back in 2004 remarked that by running Joe Ruttman four laps at Bristol, he made more money per lap than the race winner). So here’s one of the many downsides to the top-35 rule; with only one team contesting for a spot outside the top 35 and the No. 51 enjoying the points cushion they do, at 30th in owner points, there’s no incentive for a team that’s been relying on a sponsorship package worth only $100,000 a race to run full distances anymore. They can start-and-park the rest of the year, not use up their funding and still be locked-in to next year’s Daytona 500. Gotta love the rulebook.

*The Winner: David.* The wrecks for Gilliland and Skinner were certainly unwelcome, but having three underdogs deliver strong top-20 finishes (and a fourth finishing 21st) made Martinsville a very solid weekend for the back of the Cup Series garage.