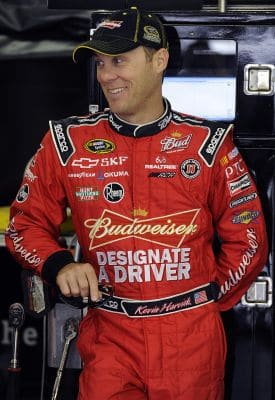 While most of us are picking candy out of our teeth the day after Halloween, track officials are most likely still picking up debris after two carnage-filled races at Martinsville Speedway last weekend — and most of it is probably from Brian Vickers’ car! Seriously, what was up with that guy?

However, as anyone who watched the races over the weekend knows, Vickers wasn’t the only one tearing up every square inch of his vehicle. In fact, not a racecar or truck was seen without a dent, scrape, or perhaps some pieces of sheet metal missing following the conclusion of each race.

Stock cars weren’t the only things being destroyed, though, as several drivers saw their championship hopes go up along with their tire smoke at the paper clip-shaped track. But for every mistake a driver makes, there is someone else to take advantage of it … and it might not be who you think.

While Tony Stewart and Carl Edwards are clearly the hottest drivers in the series right now — as only eight points separate the two of them with three races to go — there are a few competitors who deserve recognition for their recent finishes, too. So before we get to the teams that aren’t looking to end well, let’s look to a couple of drivers who might just emerge from the shadows just in time for Homestead.

Are you calling Kevin Harvick a long shot for the Cup? Don’t be too quick to count this HOT driver out, yet.

*Kevin Harvick* – Largely expected to make another run at his first career title after falling just short to Jimmie Johnson and Denny Hamlin last season, the 35-year-old driver is still in it but considered a long shot. Sitting third in points might sound good until you see the deficit: -21 points with three races remaining, mostly due to a poor finish in Talladega.

However, we’ve seen some crazy races this year and plenty of fuel mileage events. All it takes is one blown engine, bad pit stop, or an ill-timed caution and Harvick could easily slash ten points off that shortage (assuming he doesn’t have the same issue).

He might not be the title favorite, but it wouldn’t be safe to count Harvick out, either.

*Denny Hamlin* – Hamlin won’t be contending for the title this year, but he does have his own battle to fight. Currently sitting 11th in the points, Hamlin is only four behind 10th-place Jeff Gordon, which would guarantee Hamlin a reserved seat at the postseason celebration at Wynn Las Vegas in December.

While he’s struggled through most of the Chase, his last few finishes definitely give Hamlin reason to believe he can pull it off. His last three results are ninth, eighth, and fifth. Even though Hamlin has admitted the team is focused on 2012, I would imagine his sponsors would like to see him take the stage at NASCAR’s biggest party. As Hamlin would say, “It’s Denny time!”

*Honorable Mention:* Camping World Truck Series sophomore *Austin Dillon* is making some waves in his own series, leading the standings by 11 points over James Buescher with just two races remaining. It’s going to take more than just luck to knock the grandson of Richard Childress off the top of the board, but if they do … well, someone had better hold Childress’s watch!

Carl Edwards’ isn’t on top of his game – at least, not yet – but retains the top spot in this championship Chase heading to Texas.

*Carl Edwards* – Seeing the current points leader in this section is probably a bit of a shock, especially since his worst finish in the last ten races is 11th. However, it was Edwards’ post-race comments and performance at Martinsville that got him bumped down to the warm section.

Yes, Edwards was able to finish in the top 10 at one of his worst racetracks, but it was a hard time getting there and Edwards almost cost himself a ton of points before the day was over. Certainly, he deserves praise for the fact that he was even able to finish a race where even his teammate was swept up in the melees, but the championship driver has used the phrase “we were lucky to finish where we did” too many times in the last few weeks. Though the season is almost over, eventually luck will run out, and that’s especially if his closest contender Stewart continues at the pace he is on now.

*Jeff Burton* – For the first time all season, Burton has earned consecutive top-10 runs after finishing sixth in Martinsville and second in Talladega. To say 2011 has been a struggle for the Virginia native would be an understatement, as Burton has only one other top 10 all season and an average finish of 19th.

However, some help could be coming next year. There is no arguing that Richard Childress Racing has been at its best when there were only three full-time cars, and though RCR has talked about maintaining that, no driver has been named to replace Clint Bowyer when he leaves at the end of the season. Though the fourth car will likely be used in select races for grandson Austin Dillon, maybe they can focus on getting Burton competitive again when there are fewer full-time teams to focus on.

*Honorable Mention:* *Martin Truex, Jr.* has also finished in the top 10 the last two weeks, only the second time he has done so all year. An eighth-place run at Martinsville followed up a tough week for the Michael Waltrip Racing driver after he and teammate David Reutimann were penalized 25 points and lost their car chiefs and crew chiefs for the remainder of the season. The penalties were assessed after NASCAR discovered illegal modifications had been made to their cars in Talladega.

With a number of subpar runs during these playoffs, Kurt Busch (upper left) has faded into the background since Dover.

*Kurt Busch* – While his temper is still red hot, Busch’s results have cooled off since his victory in Dover. His best finishes since then were two 13th-place results in Kansas and Charlotte, and it’s gone downhill since then.

Busch is no longer a contender for this title, now 58 points out of the lead and showing no signs of improvement. I’ve said it before, and I’ll say it again. I don’t care how many wins Busch has this season. Berating your team over the scanner week in and week out is not going to deliver solid results over a long period of time, especially since Busch isn’t near as emphatic when they actually do something right.

I might be in the minority here, but I am not at all surprised by Busch’s struggles in the Chase, and I don’t expect to see any consistent improvement until he lets up on the tirades. Sadly, I don’t see that happening anytime soon.

*Greg Biffle* – I still believe that Biffle can get a win before this season is over, but he’s going to have to get out of this rut he’s in if that’s going to happen. Biffle has finished 15th, 14th, and 15th the last three weeks, and has 69 laps led (68 of which were in Charlotte).

Those are results expected of a non-Chaser, though I expect more from this No. 16 team. They’ve shown potential several times this season but have never been able to follow through on it; now, it looks like they’re focused more on improving for 2012 than finishing out this year on a high note. I can’t say that I blame them, but then again, Biffle has some solid results at the remaining three racetracks – so finishing the season on the right footing is certainly not out of the question.

*Honorable Mention:* *Joey Logano* is still struggling and hasn’t had a top-10 run since August in Watkins Glen. Even though that’s rather underwhelming, I’m not going to keep delivering my rant on his performance, especially since he has a second sponsor next year in Dollar General. Instead, I’ll give him a proverbial pat on the back for finishing on the lead lap in a race at Martinsville where several championship contenders did not.

*Brian Vickers* – You didn’t really think I was going to let this disaster slide by me without getting a mention, did you?

I don’t know how to describe Vickers’ weekend at Martinsville other than “destructive.” Not only was his car damaged beyond recognition before the day was over, he’d played a part in doing the same to several other cars throughout the event.

I can’t help but feel for Vickers, too. His comeback season after being sidelined for several months due to blood clots should have been much more glamorous. Instead, Vickers is in desperation mode as Red Bull Racing has not yet found any investors for 2012, which means Vickers is without a ride next year.

However, there really is no excusing his very amateur-like performance in such an integral race to this championship, so let’s hope he leaves the destruction to professionals like Steve Wallace from now on.

Without a win this season, posting two top-5 finishes Jamie McMurray has suffered through a disastrous 2011.

*Jamie McMurray* – Speaking of Vickers, one of his victims happened to be McMurray, who left quite a big piece of his car (see: battery) on the racetrack after heavy contact from the spin. Following the caution, McMurray made a hilariously failed attempt to retaliate, barely touching the side of Vickers’ No. 83 machine before again running into the outside wall.

In fairness, McMurray isn’t known for being much of a hot head so he hasn’t exactly had much practice. However, I understand his frustration in that he’s already had a long season with only four top-10 runs, and the contact definitely didn’t help matters.

Still, that was just really pathetic. Maybe he should take lessons from Carl Edwards.

*Honorable Mention:* A long year for *Mark Martin* is finally coming to a merciful close, as only 10 top-10 runs this season has probably made him thankful that he’s going into partial-retirement (again) at the end of the season. I’m sure Kasey Kahne is thrilled to see his predecessor finish out the year on such a high note…