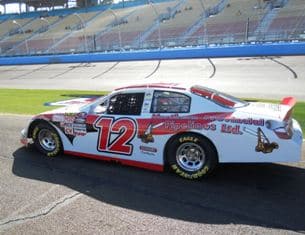 DJ Kennington will be running in the Nationwide and K&N races at Phoenix.

Over several seasons Kennington raced for Randy MacDonald in the NASCAR Nationwide series and had several strong runs at Phoenix. “In 2008 and 2009 we had pretty good races” said Kennington. “We gained a bunch of positions in each race and I know Randy will have a well prepared car again for us to race” he added.

At the All Star Showdown at Irwindale, California earlier this year Kennington had a sensational run for Bill McAnally. Kennington was competing in the event for the first time and finished second in the race. “The car was a little tight to make a push for the win but it was really strong. We had such a good race that we decided to run the spring race together at Phoenix and we finished top ten. I’m looking forward to working with Bill McAnally racing again” said Kennington.

A new wrinkle to the weekend action is the newly resurfaced Phoenix International Raceway. Over the summer the track was reconfigured during prior to the new asphalt going down and Kennington is looking forward to racing on the smooth surface. “I really enjoy racing at PIR” said the driver. “It’s a fun, fast track and the new pavement should make for some really good racing”.

This double header weekend is being made possible with support from several of Kennington’s long time sponsors. “Dwight Kennedy at Northern Provincial Pipeline has helped us out for many years, so have the folks at Mahindra Tractors” said Kenning ton. “It’s nice to have Whitemud Mechanical joining us as well. This whole team appreciates everyone’s support and we’re going to work really hard to put on a good show for them” he stated.

Practice begins on Thursday for the Nationwide Series. Qualifying and both races will take place on Saturday November 12th. Race fans will be able to watch the Nationwide race on TSN in Canada & ESPN in the US at 3PM Eastern time. SPEED will have coverage of the K & N Series race beginning at 5:30PM Eastern.