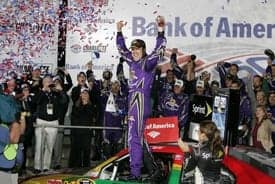 The best fantasy owner is always on the lookout for the latest trend. It has been a difficult season to spot these tendencies because of fuel and tire strategy deciding the outcome of many events. Luckily the good folks at NASCAR (can you sense the sarcasm?), have eleven 1.5-mile circuits on the 2011 calendar. Two out of the final three races on the schedule will be at these cookie-cutter tracks, including Sunday’s race at Texas.

While each intermediate track varies slightly in layout, drivers that usually perform well at one, perform well at another (See *Carl Edwards* below). Take advantage of this by studying the nine races at 1.5-mile layouts before this weekend. Chances are it won’t only assist you on Sunday, but it will help you set your lineup for the final race of the season at Homestead as well.

When searching for your top-level driver for Sunday’s race at Texas, go to the tape of the spring race. If that isn’t convincing enough, take a look at the footage from a similar 1.5-miler three races ago (Charlotte). The result from both races was the same, absolute dominance from *Matt Kenseth*. He led 169 laps en route to winning the spring event at Texas and led 46 three weeks ago in a victory at Charlotte.

If recent intermediate races are any indication, and they are, Matt Kenseth will be tough to beat at Texas.

The No. 17 team’s championship hopes appear bleak with a 36-point deficit and only three races to go, but Kenseth should be a factor to win in two of those races (Texas and Homestead).

Despite having three wins at Texas, *Carl Edwards* has an average finish of 16.54 at the facility. He finished 19th and 33rd in 2010, but in the spring race of 2011, the No. 99 team seemed to hit on something again. Edwards finished third, which also is the same spot he earned three weeks ago at Charlotte.

The consistency of the No. 99 team at intermediate tracks in 2011 has been amazing. Edwards has finished in the top-5 in eight of the nine races at 1.5-mile layouts so far this season. With two still left on the schedule, the championship is Edwards’ to lose.

*Marcos Ambrose* is more known for his road-course exploits, but Ambrose performs well at many of the 1.5-mile ovals the Sprint Cup Series visits. Ambrose has been fourth at Las Vegas, sixth at Texas, sixth at Charlotte, ninth at Kansas and fifth at Charlotte so far in 2011. The No. 9 team was always fast at these tracks with *Kasey Kahne* behind the wheel and the trend has continued with Ambrose.

Speaking of Kahne, his performance at the intermediate speedways hasn’t dropped off much since he joined Red Bull Racing earlier this season. Kahne led laps in the late stages of the Coca-Cola 600 before getting shuffled in the chaos and he placed fourth in the fall race at Charlotte.

Kahne has also been one of the hottest drivers in the first seven races of The Chase. Before finishing 25th at Martinsville last Sunday, the future Hendrick Motorsports driver recorded four straight top-10s, two of which were on 1.5-mile tracks.

There were only a handful of drivers that could contend with Kenseth in the spring at Texas. *Clint Bowyer* was one of them. The Richard Childress Racing driver finished second and led 44 laps in the event. The No. 33 has ended up seventh in the last two fall races in Fort Worth, which isn’t too shabby for a mid-level pick.

I’ve been waiting for this race to use my last fantasy selection of the season with *Paul Menard*. The Wisconsin native excels at the cookie-cutter 1.5-mile tracks like Charlotte, Atlanta and Texas. He was fifth in the spring race and 10th in the fall of 2010 for Richard Petty Motorsports. Selecting the right low-level driver can make or break your championship run, and Menard will be the favorite of the group on Sunday.

*Jeff Gordon* picked up a win this season at Atlanta, but the No. 24 team has underachieved at Charlotte and Texas. Gordon hasn’t recorded a top-10 at Texas since he won there in April of 2009. Gordon has been 13th, 31st, 37th and 23rd in the last four races in the lone star state. Three races ago at Charlotte, Gordon was 21st.

*Regan Smith* has taken his performance to another level in 2011, and has shown consistent improvement at most tracks as his career has progressed. Texas cannot be included in that group. It is one of only four tracks (Kansas, Phoenix and Watkins Glen are the others) that Smith has not gotten a top-20 result at. He was 37th after getting involved in accident in the spring.