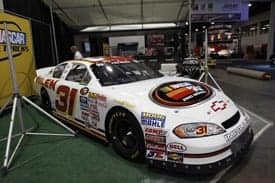 While it may not be Sprint Cup Series Championship week quite yet, NASCAR has already started to make some noise in Las Vegas. Several executives from the sport were attending the Specialty Equipment Market Association or “SEMA” show this week, which houses approximately 2,000 exhibitors ranging from auto companies to small custom shops. NASCAR’s presence at the annual event, in many different forms was meant to raise awareness of how the automotive community can get involved with the sport. The end result was a rousing success, packaged with some major announcements – including the renewal of a partnership with the Federal-Mogul Corporation.

Federal-Mogul is the manufacturer of MOOG chassis parts, which has been supplying steering and suspension products to NASCAR teams since 1962. Not only have NASCAR Sprint Cup Champions been relying on MOOG ball joints for over 40 years, but the company has also been a part of one of the longest contingency programs in NASCAR.

Cars from NASCAR’s K&N West Series and the Canadian Tire Series were on display out in Las Vegas’ SEMA Conference this week; those attending the SEMA Conference could also observe the Hot Rodders of Tomorrow competition made possible by Edelbrock.

Fans are certainly familiar with the blue and yellow MOOG decal that adorns the side of each participant’s vehicle in NASCAR’s top three series and the K&N Pro Series. What they may not realize is that the first driver to carry the logo was actually Glenn “Fireball” Roberts in 1963. Now, 48 years later, the company is the presenter of the MOOG Chassis Parts Problem Solver of the Race Award, which honors the top-performing crew chiefs in the sport.

MOOG’s partnership with NASCAR provides the organization with a way to raise brand awareness while utilizing the sport’s national platform to exhibit their product’s durability. “There’s no better proving ground for MOOG chassis and suspension components than NASCAR,” explained an executive for Federal-Mogul. “This partnership emphasizes our commitment to maximize our brand exposure as well as provide elite chassis and suspension parts to NASCAR race teams, professional automotive technicians and vehicle owners.”

“This agreement extends NASCAR’s strong relationship with one of the most commanding brands in the automotive world today,” remarked Todd Armstrong, Managing Director of NASCAR’s Automotive Group. “MOOG remains a key brand in helping to communicate our primary message of performance, precision and quality to the consumer.”

While the renewed partnership with Federal-Mogul was a major announcement, it wasn’t the only message that NASCAR was in Las Vegas to convey. The 2011 K&N West Champion and 2004 Whelen All-American Champion Greg Pursley, as well as Luis Martinez, Jr., the 2010 Sunoco Rookie of the Year in the K&N Pro Series were in attendance. Both men were speaking to members of the automotive community about how to get involved with the sport’s developmental series, such as the ones they’ve enjoyed so much success in through the years. Jim O’Connell, NASCAR Vice-President and Chief Sales Officer also participated in what was perhaps the most popular portion of the show: a panel discussion about reaching new customers through non-traditional channels.

For those visual learners in attendance, the K&N West and Canadian Tire Series cars were on display while perhaps the most talked about advancement this year, the new electronic fuel injection engine was on the show floor as well. The buzz has increased around the new technology, which will debut in 2012 as several Sprint Cup competitors recently tested the package at Charlotte Motor Speedway and Talladega Superspeedway last month.

Of course, NASCAR already entered the conference with strong ties to the automotive industry already intact. In fact, two of the sport’s top-tier Performance partners received the Automotive Aftermarket Industry Association’s (AAIA) Impact Award, which honors four aftermarket professionals under 40 years old who have made notable contributions to the aftermarket industry.

Vic Keller of Van Tuyl Group was recognized for his role in helping to launch Phyzix Automotive, the number one Professional Maintenance Fluid of NASCAR. Bryon Osterland, who also received the honor, manages a team that is responsible for purchasing $600 million dollars of finished goods within the Global Aftermarket Business Unit at Federal-Mogul, the previously mentioned longtime partner of NASCAR.

Clearly, the many accomplishments for NASCAR from SEMA show how their partnerships across the automotive world remain strong. And after their presence at the conference, new alliances and contracts with exciting new companies are always sure to follow suit.

_This article is a sponsored excerpt. All rights reserved._