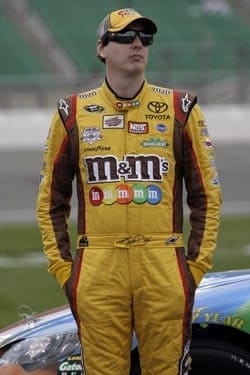 NASCAR is a racing series built on rivalries. Even more than that, it is a sport that thrives on them. Through 62 years of competition, each individual era has been defined by these mano-e-mano, on-track boxing matches: Petty-Pearson, Allison-Yarborough, Yarborough-Waltrip, Wallace-Earnhardt, Earnhardt-Gordon… the list is long and storied, full of current and future Hall of Famers. Rivalries, when they are played the right way, have helped make the sport as popular as it is today.

But even with NASCAR’s “Boys, Have At It” policy, there is a line not to be crossed. During Friday night’s Camping World Truck Series race, “Kyle Busch crossed it when he deliberately wrecked Ron Hornaday, Jr. under caution.”:http://www.youtube.com/watch?v=dDBd0CLjOwc

Kyle Busch will be sitting on the sidelines for at least the rest of the weekend after Friday night’s intentional wreck of Ron Hornaday.

In case you missed the Truck race, here’s what happened: Hornaday and Busch were racing for position just 14 laps in when they came upon a lapped truck. As both went to its outside, Hornaday got loose and Busch didn’t give him much room to correct. Stuck in the middle, Hornaday slid up under Busch, and both drivers scraped the wall to draw a yellow. However, heading into Turn 3 the trucks had not slowed to caution speed when Busch got behind Hornaday and hit him several times, finally turning his own truck sideways in a blatant attempt to wreck the Kevin Harvick, Inc. driver.

He succeeded. Brute force and determination finally hooked the No. 33, sending Hornaday head-on into the retaining wall for an ugly wreck while Busch destroyed his own truck in the process.

That’s right. While the other eleven Chase contenders will race for the championship Sunday, or at least the best possible seat in Las Vegas, Busch will not be among them. Michael McDowell will replace him in the No. 18 M&M’s machine, killing any faint title chances left; Busch was 57 points off the lead coming to Texas. That may not be the only race missed, either, as Helton also did not rule out further penalties in the coming week. Joe Gibbs, Busch’s Sprint Cup and Nationwide Series car owner, could add additional repercussions as well. Saturday morning, while “taking responsibility” for the incident a humble Gibbs said that he still needed to meet with key people, including Busch’s sponsors, before making any decisions. M&M’s expressed their displeasure with Busch earlier in the season, and it remains to be seen how much more that they will put up with, especially given their family-friendly nature.

As it stands right now, Busch deserved everything he got. Whether or not the wreck was a deliberate attempt to retaliate against team owner Kevin Harvick, with whom Busch has had a long-simmering feud, or not, it was completely uncalled for. Anyone with eyes could see that Hornaday did not get into him deliberately; anyone with a brain understands the man was running for a championship. Busch’s statement afterward, summarizing that Hornaday should have known he’d get loose when they passed the lapped truck and backed out is ridiculous, but trademark entitlement. Busch is always quick to complain that someone else – never him – should have backed off and not raced him hard. At the same time, Busch is never the one to back out, the constant aggressor even when he should know better. Backing out, in his mind appears reserved to lesser drivers than him; even early in a race, even if it means a wreck.

It also wasn’t the first time that Busch has retaliated on a KHI driver under caution. At Bristol in August, Busch deliberately turned Elliott Sadler under yellow when Sadler cut across the nose of his truck. Sadler wasn’t driving for Harvick that day; he was diving for Joe Denette’s start-up operation. Busch wrecked his own truck in the incident and could not continue, regardless of whether NASCAR would have let him.

So there is a pattern of Busch going after Harvick’s team drivers after he and Harvick were told to stay away from each other after an incident at Richmond (though Harvick seemed to take the brunt of NASCAR’s wrath on that one). And the consequences for Busch’s innocent victim at Texas are far-reaching. This incident effectively ends a strong late bid for a fifth series title for Hornaday, who is looking for a ride for 2012. In an ironic twist, it also handed the owner’s title to Harvick’s No. 2 truck over Busch’s self-owned No. 18. Busch’s deliberate wrecking of Hornaday for an unintentional racing incident was far enough out of line as it is. But if it was done to keep Harvick, Hornaday’s owner, from competing for that title too that’s stooping to a level so low that justifies the outcry further. So much for that “new” Kyle Busch everyone was talking about this year.

There has been outcry over this incident. Many people wanted to see an even stiffer punishment: Busch parked for the remainder of the year. That would be a little too far, though the weekend is certainly not unprecedented and was completely appropriate under the circumstances. What Busch did was a slap in the face to his car owner, Joe Gibbs and his sponsors. He was given everything he needed to make a Sprint Cup championship bid, and threw it away to potentially get even with Harvick in a race he couldn’t even receive driver points for.

But is Busch solely to blame?

For this incident, he certainly is. But why was it allowed to even get to this point? That’s on NASCAR as well as on Busch. The “Boys, Have At It” policy that the sport has adopted, while it can be a positive when drivers use it for its original intent, had no clear line drawn between acceptable and not. NASCAR took the stance that they would evaluate each incident separately, something Helton said he understands can be frustrating for both fans and competitors. “As annoying as the comments that I’ve made personally in the past about ‘we’ll know it when we see it’ might have been, we saw it last night,” said Helton Saturday. And while Helton claimed that Busch’s cumulative record had only a small role in the decision, it had to be a part of it. The main reason for the penalty, of course is that it was done under caution and Busch hooked Hornaday in the corner, sending him head-on into the wall at what was still a relatively high rate of speed – remember, the pace car had not yet picked up the field.

“Boys, Have At It” has its good points. At Sonoma in June, for example, Tony Stewart took exception to Brian Vickers repeatedly blocking and spun him. Vickers later retaliated, punting Stewart into the tire barrier. And then it was over. Stewart even acknowledged that he had it coming, and the two went on with no festering ill will. That’s how it’s supposed to work, and it works well. I don’t like deliberate wrecking, especially at the bigger tracks, but sometimes a reminder of how to drive is necessary, and there is a right way and a wrong way to do it. Stewart and Vickers did it the right way at Infineon Raceway; Busch did it wrong at Texas. He had no real beef with Hornaday; the real problem was with Hornaday’s truck owner, and destroying Hornaday’s championship hopes over an old argument with Harvick was flat wrong. Helton acknowledged that the points implications did play a small role in their decision to park Busch.

It’s good that NASCAR has drawn a clear line in the sand on the boys having at it, but the policy could well have led to Friday’s incident. Though Busch and Harvick were put on probation after Richmond in May, that only lasted four weeks and Harvick got a much sterner warning than Busch about the consequences of further actions. Busch was not punished for his deliberate turning of Sadler at Bristol, and other small incidents of rough driving have been allowed to slide as well. So, to an extent, it’s natural that Busch didn’t think that this time would be any different. NASCAR tolerated his actions before, even after warning the driver.

Busch could be really good for NASCAR, and the sanctioning body knows it. When he drives with respect for those around him, he’s a brilliant driver who’s a joy to watch in a Cup race. NASCAR wants that, and they want a bad boy, something the sport has been lacking since the death of Dale Earnhardt over a decade ago. So perhaps they have been a bit too lenient with Busch at times, allowing him to show disrespect for NASCAR and his competitors. They’re desperate to have that type of driver in the sport. It’s a bit like the parents of an insolent child, spoiling him just a little too much in an effort to help him be the best he can be, then realizing that he’s gone too far, broken too many rules and not being sure what to do next. So to some extent, even though the responsibility for Friday night is Busch’s, NASCAR shoulders some of the blame. They allowed Busch the illusion that his tactics have been acceptable in the past.

Unfortunately, Busch is no Dale Earnhardt. Earnhardt had the respect of his competitors most of the time, and perhaps more importantly, to the fans he represented an everyman, one who loved racing so much he put his very soul into it and yes, ruffled feathers in the process. Busch doesn’t have that appeal. He’s exciting to watch in a racecar, but his air of spoiled entitlement is much harder to identify with on a personal level, and many fans don’t see the same level of hard work and earning his way up that Earnhardt had. Busch doesn’t have the same level of respect from his competitors, either. They are similar in their skill and aggression, for sure, but the comparison ends there.

Hopefully, Busch will learn from his choices on Friday night. It would be good for NASCAR to have a driver of his caliber if he’d work to race the right way and curb the attitude. It’s just that up to this point, NASCAR did him no favors by feeding and even rewarding this behavior. They can’t change the past, although this suspension is a good start; hopefully, they will not tolerate any such behavior in the future.

Because it’s time for Kyle Busch to grow up and act like the champion he could be. And it’s also time NASCAR stands up and makes him do it.