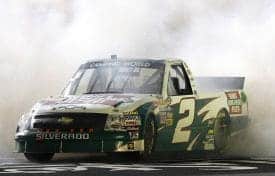 *In a Nutshell:* Kevin Harvick took the checkered flag 0.294 seconds ahead of points leader Austin Dillon to win the WinStar World Casino 350K Friday night at Texas Motor Speedway. In a race that was slowed by just six cautions–four came within the first 60 laps–Harvick held the lead on a green-white-checkered finish for his fourth win of the season. Ty Dillon, Nelson Piquet, Jr. and Matt Crafton rounded out the top 5.

*Who Should Have Won:* *Kevin Harvick* clearly had a strong truck in the late stages of the race Friday night. After starting tenth, the driver of the No. 2 Hunt Brothers Chevrolet worked his way through the field, pulling out to a nearly four-second lead before a caution with just five laps remaining. Harvick led four times for a race high 61 laps en route to his fourth victory this season.

Kevin Harvick came out on top after leading 61 laps Friday night in Texas.

*1. What was Kyle Busch thinking when he wrecked Ron Hornaday, Jr. less than 20 laps in?*

On lap 13 in the WinStar World Casino 350K, championship contender Ron Hornaday, Jr. found himself in a battle with Kyle Busch for second place. As the two came up on the lap down truck of Johnny Chapman, a three-wide battle ensued that resulted in minor contact, sending both Busch’s No. 18 Toyota and Hornaday’s No. 33 Chevrolet up into the outside wall to bring out the first caution.

Shortly after the caution flag flew, that wasn’t the end of the contact between the two. Busch, upset about the incident, went after Hornaday and turned him into the outside wall, tearing up both trucks. And as a result of the on-track action, Busch was parked for the remainder of the race, a penalty that cost him very little thanks to the damage he already had on the No. 18 truck.

After the wreck, Busch was definitely not at a loss for words when he explained what happened.

“If you consider Ron was in the championship maybe Ron could’ve played it a little bit smarter on lap 15 and checked up a little bit and given room to everybody around [him],” Busch said. “Obviously if you make it a three-wide situation, I can’t go up in the dirt. I’m already on the outside lane and there’s not three lanes out here right now. It’s the first race here this weekend.”

“So if I just lay over and give up everything for Ron Hornaday, that’s not Kyle Busch fashion,” Busch continued. “I’m out here to win a race just as much as anybody else is. When he races up on my inside, gets loose and takes me up to the fence–I ended up losing my cool.”

With all of that said, Busch made an attempt to justify his actions.

A pile of large pieces cut off of Ron Hornaday, Jr.’s truck sat on the ground in the garage area while the No. 33 team feverishly worked on repairs before ultimately loading their wrecked truck on the hauler. (Photo courtesy of Rick Lunkenheimer)

“I’ve been wrecked four weeks in a row [including Sprint Cup races at Talladega and Martinsville] and finally I’ve just had enough of it,” Busch said. “Sorry it was Ron Hornaday and he’s going after a championship, but the fact of the matter is you can’t place all the blame on one person–there were two people that got into it to begin with and there’s two people that ended it.”

Really, Kyle? That’s your justification for a blatant wreck doled out to a guy who got loose in a three-wide situation? Sure, Hornaday could have backed off and let it go, but the same could be said about Busch, and beyond that the driver of the No. 33 Chevrolet had run down the driver of the No. 18 on the straightaway and clearly had a faster truck. Why should he have been the one to back out?

“It was a racing deal. That crap he pulled down there, they parked Harvick for the same retaliation at Martinsville (in 2002). If they don’t park him on Sunday, I’ll be really upset. That’s just ignorant and stupid. I don’t know what you want to call it,” Hornaday said. “He’s (Busch) such a candy-ass, he won’t stay around to get a whooping like he’s supposed to get. It’s a shame. It’s not like I did anything wrong. I ran him down from a straightaway. He knew I was faster.”

The incident Hornaday is referring to is when team owner Kevin Harvick was parked for the Sprint Cup race at Martinsville after intentionally wrecking Coy Gibbs during the Truck Series race earlier in the weekend. A precedent was set nine years ago, but will NASCAR do anything more about it after their meeting with Busch Saturday morning?

Something tells me no further penalties will come. But at some point a line needs to be drawn about what is and isn’t acceptable on the track. Yes, NASCAR has touted their “Boys Have At It” policy but has never really explained what they deem as an inappropriate action. The message they’ve sent throughout the last two seasons is each case is different and there’s no clear cut way to determine exactly who can and can’t wreck their fellow competitors.

What’s interesting about this situation is Busch’s retaliation ultimately hurt him just as much as Hornaday. Sure, Hornaday is now mathematically eliminated from the points race, but Busch was working toward the Owners’ Championship for the No. 18. Because he wrecked his truck and was parked, that allowed Kevin Harvick, Inc. to clinch a week early.

With all of that being said, it’ll be interesting to see if anything comes out of Hornaday in the coming days after a comment he made.

“So let’s have at it? So I can go over and beat his ass and let’s have at it? He lives too close to me,” he said. “We’ll see what NASCAR does. If they don’t handle it right, I’ll be over at his house Monday morning.”

Though those comments were strong, it wouldn’t surprise me if a couple of days to cool off changes Hornaday’s perspective a little.

_Author’s Note: Stay tuned to the Breaking News box on the “main page”:https://frontstretch.com for updates on any decisions NASCAR makes after Saturday morning’s meeting with Busch._

*2. Can anyone catch Austin Dillon for the championship?*

Coming into the WinStar World Casino 350K, the top 4 in the Truck Series standings were separated by a mere 15 points, but a trip to Texas Motor Speedway changed everything–the top 4 are now separated by 48 points and leader Austin Dillon has a 20 point advantage over second-place Johnny Sauter.

But what happened to open up the championship standings so much?

First, there was Ron Hornaday, Jr.’s early wreck that mathematically knocked him out of contention for a championship that was so far out of reach just seven races ago. And then under the final caution flag, James Buescher ran out of fuel and was left to settle for a 19th-place finish, two laps down. It marked only the third time this season the 21-year-old has finished outside the top 15.

So that brings us to the clinching scenarios for Austin Dillon in two weeks at Homestead-Miami Speedway. Regardless of what his other competitors do, a finish of 16th or better will guarantee a championship for Dillon as he prepares to move on to the Nationwide Series next season. He can also finish 17th with a lap led or 18th with the most laps led.

But with that being said, Dillon is in no way a lock for the championship, having finished 31st in his lone start at the 1.5-mile oval in south Florida. Only time will tell who will come out on top, however barring a major disaster in two weeks Dillon will be the one to take home the big trophy in his final full-time season running the Truck Series.

*Ty Dillon* started eigth in his second Truck Series start but quickly found himself a lap down early in the race. Dillon was forced to serve a pass-through penalty for changing lanes on the initial start of the race, but he was able to race his way past then-leader James Buescher to get back on the lead lap prior to the first caution flag flying. Because of that, the 19-year-old driver managed to work his way back through the field and found himself inside the top 5, battling with his older brother on the green-white-checkered finish. Dillon finished a career-best third and showed off a little of what can be expected in next year’s full-time campaign.

Despite being busted early in the race for speeding entering pit road, *Nelson Piquet, Jr.* managed to pull out a solid fourth-place finish after starting seventh. The run marked the fifth time this season the rookie of the year contender finished inside the top 5.

Two rookies were taken out in one fell swoop when Blake Feese and Parker Kligerman suffered extensive damage to their machines after Kligerman blew a right front tire. After the tire blew, the No. 29 Dodge shot up the track, collecting Feese’s No. 32 Chevrolet in the process. Kligerman and Feese were credited with 27th and 28th, respectively. *Jack Smith* also took a little damage in the incident but wasn’t forced to retire until 96 laps in when he was involved in a separate incident with *Jake Crum.*

Austin Dillon maintains his spot stop the standings, expanding his lead to 20 points over Johnny Sauter, who moved up two spots. James Buescher dropped to third and now sits 28 points back thanks to running out of fuel under the final caution and finishing 19th. Ron Hornaday, Jr., who dropped a spot, finds himself 48 markers back after his early wreck, and Timothy Peters rounds out the top 5.

Todd Bodine sits in sixth, 79 points behind the leader followed by Matt Crafton in seventh. Rookie Joey Coulter is just two points behind Crafton in eighth after a sixth-place finish. Cole Whitt and Nelson Piquet, Jr., who jumped two spots, round out the top 10.

“I said some things in the heat of moment cause I was so mad! Kyle [Busch] knows what happened whether he admits it or not. #cheapshot” _Ron Hornaday, Jr. on “Twitter”:twitter.com/#/RonHornaday a couple hours after the conclusion of the race_

*Up Next:*
The Camping World Truck Series heads to Homestead-Miami Speedway in two weeks to close out the season with the Ford 200 as a part of Ford’s championship weekend. Last season, Kyle Busch came back after early contact with Johnny Sauter to score his eighth win of the season. Coverage begins on Friday, November 18th at 8:00 PM ET on SPEED; the race can also be heard on your “local MRN affiliate.”:http://www.racingone.com/stations.aspx