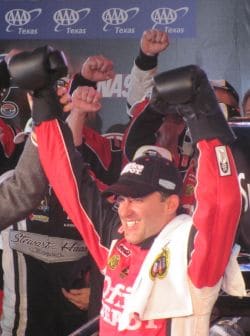 When we left Martinsville, it looked like the Chase for the NASCAR Sprint Cup Series title was down to three drivers: Carl Edwards, Tony Stewart and Kevin Harvick.
In Victory Lane at Martinsville, Stewart promised to be Edwards’ worst nightmare over the next three races, and Sunday at Texas Motor Speedway would be the first time for Smoke to try haunting Cousin Carl.

Edwards and the rest of the Roush Fenway Racing stable are always fast at Texas, Atlanta, Las Vegas and tracks of that ilk. Stewart, by taking that bullet out of Edwards’ gun, blunted one of his rival’s main advantages.

Tony Stewart won the latest round of his ‘championship boxing match’ with Carl Edwards Sunday at Texas.

He’s three points back heading to Arizona, and guess who was the fastest car in practice on the newly configured Phoenix International Raceway? If you guessed anyone but Tony Stewart, here’s a nice parting gift and thanks for playing.

The old 1.017-mile oval has long been one of Smoke’s favorite tracks, dating back to the old Copper World Classic open-wheel races, and it drives a little more like Richmond now, which is No. 1 or 1a on Stewart’s list of favorite tracks.

After winning at Martinsville, Stewart said words to the effect that Edwards was not going to have an easy three weeks to decide the title, and he kept up the chatter for much of the next seven days. The atmosphere was that of a heavyweight title fight, with one or the other yapping about who was going to do what to whom when the bell finally rang. Heck, Texas Motor Speedway even put boxing uniforms and gloves on display in the media center to pump up the rivalry.

Stewart was asked what he wanted to say in Victory Lane this week, and through a Cheshire-cat grin, Smoke said, “I don’t have to say anything, do I? I think our performance here today speaks for itself.”

He’s got a point.

Edwards did everything he could do, short of winning the race, and still lost five points to Stewart. That has to sting, at least a bit. Stewart had a max points day, leading the most laps and winning the race, which gave him 48 points, and Edwards scored 43 by finishing second and leading a lap.

In effect, Edwards watched his main rival for the Chase crown beat him at every turn, on a track that Edwards likes and his cars are suited to race, and cut his already slim lead by more than half.

As opening salvos go, it was a pretty good one for Stewart, don’t you think? It was the third straight week that the 14 bunch had gained on the 99 gang.

Edwards, for his part didn’t seem to see it for anything but what it was: another race closer to the title.

“…Tonight, as frustrating as it is to see Tony go out there and win that race, close in on us, the biggest thing I’m going to go back and talk to my guys about and think about when I leave here is, ‘Hey, take a breath, we’re leading the points, we’re fighting hard,’” Edwards said. “Two races is a long time. We can’t get ahead of ourselves. We can’t look in that mirror. We have to keep moving forward.’

“Hopefully, all these experiences of making the most out of something, hopefully we won’t have to do that the last two races. Hopefully, we’re just a little bit faster.”

Edwards was awful at Martinsville, twice falling a lap down and using the many cautions late in the race to earn a ninth-place finish. He was much better at Texas, but still had issues, like a nagging problem with blistering right front tires that had him worried.

Stewart, meanwhile, was busy putting pressure on his rival.

“We’re going to keep him [Edwards] busy,” Smoke said after winning on Sunday. “He got the message loud and clear. He has said stuff to the media this week that is really out of character for him, and we want him to think about what it’s going to take to beat us.”

Stewart was an afterthought as the Chase began, not having any victories prior to Chicagoland and running so badly in the Race to the Chase he said he didn’t deserve a spot in the final 12.

That has sure changed, hasn’t it? He has won four of the eight races and closed to three points out of the lead.

“I still say we don’t have anything to lose,” Stewart said. “We weren’t a favorite or a factor heading to Chicagoland, so we thought we would just go out and try to win. I’m willing to finish sixth or eighth, though, if it means I have a chance to win the title.”

These two are, barring anything untoward at PIR, going to battle to the end for the big trophy. That’s a good thing for the sport, because there’s likely to be a different champion hoisting the Cup at Homestead. They’re completely different people, too.

Edwards could have won three NASCAR Sprint Cups; Stewart has already won two. Edwards burst on the scene out of the woodwork; Stewart was groomed for success at the top levels of motorsports since the age of five.

At least that’s who Stewart tries to portray himself as. The truth is somewhat different.

Both are passionate and can be excitable. Both will drive through a brick wall to get a checkered flag first, and both have experience in a points battle. Stewart has been better racing from ahead; Edwards has always raced from behind.

Now, the roles are reversed. Edwards is the leader, and you know what Shakespeare used to say, sitting around the campfire on Talladega Blvd. and sipping some of Gentleman Jack’s finest: uneasy lies the head that wears the crown.

Even though it’s just three points, the equivalent of three spots on the track, it’s still a lead, although the points can really change on a moment’s notice. But Edwards is happy to be leading, and he’s been here before in other battles.

“Obviously, we wanted to beat Tony tonight and pad that lead a little bit,” he said. “At the end of the day we can walk out of here with our heads up. We’re still the point leaders. The third and fourth guys, I’m not sure how far back they are, but we had to open up a little bit of space on them, which is good.”

“Man, we’re just going to hold Tony to it. They’re going to have to run that well to beat us these next two races. I think really it’s going to be a great battle. I’m excited about it.”

Edwards has been the chaser, the guy putting all the pressure, Jedi mind tricks and mojo on the other guy. Now that he’s the leader, it’s just a different point of view.

“I think we’re very fortunate to have led the points for as long as we have this season,” Edwards said. “I think the guys, I know myself, have a certain comfort level with it. We’ve watched the guys make runs at us and then fall away.”

“At the end of the day, it truly doesn’t matter what the [No.] 14 team does or what Tony does or what anyone else does. All we can do is just go do the best we can do. It might feel comfortable to them to be the position they’re in, to be gaining points. But truly, the past is history. We’ve got to go out and run these next two races.
Yeah, I don’t underestimate them for a second. I know how good they are. But we’re going to be good, as well.”

As Chases go, this one has been the most unusual and the most unpredictable. The fact that Edwards and Stewart are making this kind of run means that, just maybe, NASCAR finally got it right.