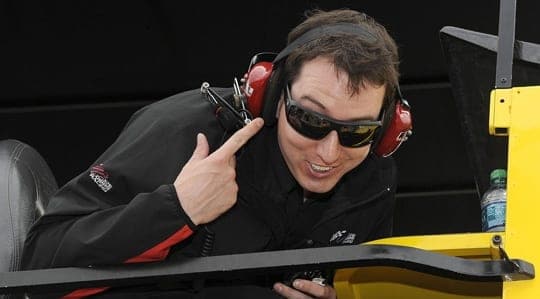 Sandie, that’s an interesting point. I have always been of the opinion that wins should always receive additional points. At the same time, I’ve been guilty of designing point systems which didn’t award a win as much as I later felt they should.

Our friend Kyle Eaton in Indianapolis says, *“After the debacle this past weekend with Kyle Busch, I happened to recall that there was another ‘bad boy’ driver at Joe Gibbs racing – namely one Tony Stewart. Tony certainly had his share of run-ins and temper tantrums and petulance along the way, but the entire time he was honing his skills to become a real force to be reckoned with. Do you see Kyle Busch as having that ability? Will you compare these two ‘bad boy’ drivers and give your opinion on KB’s chances of maturing into the championship driver that Tony has become?”*

Kyle Busch displays the driving talent of a young Tony Stewart, but can he mature into a championship driver like the former Gibbs driver?

If I recall correctly, Kyle, most of Tony’s problems were off track, and yes, involved a little petulance at times. The incident with the photographer at Indianapolis, Robby Gordon at Daytona in the garage area, etc. Even a little slip of the tongue after winning the Brickyard one year. One notable exception was his contact with teammate Bobby Labonte at Homestead. In the time you and I watched Tony in the open wheel cars at IRP and other tracks, I didn’t see much of it myself. Tony matured considerably after Home Depot ordered anger management counseling.

About Kyle Busch, I don’t know. It seems like there are times that he feels he’s the only driver on the race track, that he deserves to drive to the front, and damn anybody who gets in the way or causes a real or perceived slight. There have been times in the last few years when I wondered aloud where Jimmy Spencer was when you really needed him.

I think Kyle’s future outlook depends largely on whether Joe Gibbs and the M&Ms people feel needs to be done. That commercial with the M&Ms driving the car and Kyle all tied up in the garage area doesn’t seem so farfetched all of a sudden. As for Joe Gibbs, my colleague Bryan Davis Keith noted this week that the coach didn’t draft many players from the University of Miami back in the U’s ‘bad boy’ days.

Other folks have asked if I thought NASCAR’s penalty was appropriate.

Since it has likely cost him a chance at the championship, it’s probably enough at this point. I suggest reading “Mike Neff’s dissertation in the newsletter on Wednesday”:http://groups.google.com/group/thefrontstretch/browse_thread/thread/7982d20bd6665814 about NASCAR’s apparent double standard, and the stiffer penalties handed out to a couple of racers in the sanctioning body’s short track series.

And, on the subject of Friday night’s penalty, parking Kyle Busch after the incident, it was entirely appropriate, but I have to disagree with the end result as noted in the official finish order. Everybody who reads my stuff knows I feel, like some of our other writers, that NASCAR could learn a lot by observing what is done at the local short track level, and not just at their “home” tracks and series.

The official finish shows Kyle Busch 33rd in the finishing order, and earning $7,600.

At every track I’ve ever been involved with over more than 50 years, an unsportsmanlike conduct or rough driving disqualification calls for placing the offending driver at the tail of the finishing order, with no points and no money earned for the event. The points aren’t applicable in this case, because he isn’t eligible for points, but I don’t think his team should have earned anything at all for that night, and he definitely should not have been placed ahead of Ron Hornaday in the finishing order.

Billy in Ohio wants to know, *“What’s your take on Chad Knaus telling Jimmie Johnson he had to “crack” the rear end of the car if he won the race recently?”*

My take, Billy, is that I thought Chad was smarter than to say that on an open radio link. That’s the kind of thing you tell a driver in person before the race.

Don, he may have, but I didn’t hear it there first. My first memory of that quote came in regard to the Little 500 at Anderson, In., which starts 33 non-winged sprinters on a paved quarter-mile high banked track.