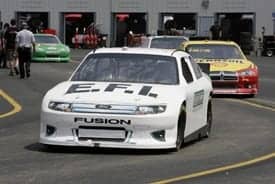 A lot has certainly happened in the world of racing since the last time I wrote in. First and foremost, I just want to express how terrible I feel for Dan Wheldon’s family, my thoughts are with them following that tragedy. Unfortunately, racing is a dangerous sport and one of the draws to motorsports in general is that there is a little bit of a danger element. We all know as race car drivers going into it that there is a possibility of something bad happening. The reality of the situation is that things can happen and unfortunately they did. The main thing we can do now is learn from what happened to Dan, and move forward to make all forms of motorsports possible, including stock cars.

On the topic of safety, I certainly was thankful for the safety innovations NASCAR has implemented after my wreck at Talladega. That was, without a doubt, one of the bigger impacts I have experienced and not something I want to do every day, I can promise you that much. After I lost my drafting partner, Kurt Busch, Casey Mears and I got hooked up pretty quickly and started to work well together. It was just a matter of me being in the wrong place at the wrong time. There was nothing to do to change the outcome of that on my part. When cars are bunched up, things like that are going to happen.

On the topic of the cars being bunched, particularly two by two, we’ve now had four restrictor plate races under our belts with this new format. I think it was cool when it first started, as it was something different. Then we all started to get used to it and now it’s to the point where probably most of us are over it. I think the general consensus in the garage is that we would rather be responsible for ourselves and not for two cars. NASCAR is doing a good job evaluating all of the options to see how they can improve things for next year. One option I’m not sure I would want to pursue is going without restrictor plates to break up the packs. The downside to that is the cars get airborne a lot easier and I would be concerned for the fans in the grandstands.

Regan Smith was among a number of drivers to take part in fuel injection tests preparing Cup cars for the 2012 season.

A number of us participated in the fuel injection tests last month. I definitely feel like the cars drive differently. The throttle response is crisp and the acceleration is cleaner. Since the new system is set by a computer, it allows for a lot more efficient use of the fuel. I’m sure you’re all familiar with the flame that appears from the exhaust pipes every once in awhile. With the fuel injection system, we shouldn’t have as much of that any more, so that is one difference you may notice from a fan’s perspective. There is going to be a lot to learn; we’ve already picked up on some stuff and will continue to do so next year. It’s going to be a constant evolution process and the guys that figure it out first will have an advantage over the others.

Some of you may be wondering what happened between the No. 99 car and I at the end of the race at Texas. It was just a racing scenario, there was really no incident. I was extremely loose at the time. We tried two tires and it didn’t work out at all. I was running high, trying to stay out of the way, not realizing that he was committed to the same line. By the time I realized that, I was already loose and when he was to the outside, I was just trying to keep it off of him. So I was just a bit in the way, even though I was doing everything possible to avoid him.

We definitely made some significant gains in our intermediate program at Texas. I was feeling some really good things in the car that I wasn’t feeling at other similar tracks this year. We found some stuff that will really help us out next year on the mile and a half tracks. We got caught on pit road at one point and lost two laps but were able to make them up. Towards the end of the race, I felt that our Furniture Row Chevy was poised for a top 10 or 15 finish, until the 2 tires didn’t work as we anticipated. We learned a lesson for the future though and I have to say that the entire weekend was a huge positive.

The other big news at Texas was of course Kyle Busch’s suspension. I don’t really have an opinion on whether it was right or wrong, but I do have some observations. I think there are a few things that went into the call to suspend him. First was the fact that it impacted the championship. Second, the incident that it stemmed from, to me, looked like a non-incident, just a racing deal. Both trucks got together and they would have probably been able to fix them and get back to racing. Perhaps past incidents Kyle was involved with played a role as well. When it’s all said and done, hopefully it will turn into a positive for Kyle. He’s very talented, maybe the most talented driver in the garage area. If he can harness some of his emotions, he could win several championships. So we’ll see what the outcome is.

The weather out here in Denver has been a bit crazy of late, even for Colorado standards from what I understand. I got a day of snowboarding in last week. It was nice to get away for a day and do something different which was nice. The snow is not great but the mere fact that I’m snowboarding already at this point in the year is pretty cool. This is definitely the earliest I’ve been out on the slopes. In fact, some of the locals even said they’ve never been out this early.

As to the remainder of the season, I think we are going to witness an exciting championship battle. Tony and Carl are both bringing their “A game” and will continue to do so. I don’t know that there is really a favorite between the two of them. The only prediction I’ll make is that Jimmie Johnson is out at this point. I was one of the last people to abandon my prediction and was prepared to go down on the Johnson ship. Looks like I finally have to concede my prediction.

One highlight of the 2011 season for Regan smith and Furniture Row Racing was picking up their first win at Darlington in the spring.

If I were to evaluate our performance as a race team this year, I think the first thing that comes to my mind is that we’ve had some opportunities that we didn’t capitalize on. Depending on what happens in these last two races, I’d probably give us a B-. We did get the first win, we ran well in a lot of the big races and we had speed almost everywhere we went, so those are all positives. I still feel that there were other things that I could capitalize on better as a driver. I think overall, as a team, we need to figure out how to do those things next year from the start. The goal for 2012 is definitely to make the Chase and continue to get more competitive and win more races. I know all three are possible.

It’s going to be a big offseason for me with the wedding coming up in a few weeks. I’m trying not to think about it too much at the moment. Although the more I try not to think about it, the closer it gets and the more I do have to think about it. I don’t think it will change that much though as Megan and I have been together for awhile. It will be a fun day though and I am looking forward to it. Our honeymoon will follow soon after. By the time we get back, we’ll be into the holidays and then right after the New Year it will be Daytona test time, so the new season will be here quick. Our offseason gets shorter and shorter every year and quite honestly, to me, that’s not a problem.

Thank you once again for your support of the entire Furniture Row Racing team throughout the entire season. We all really appreciate it and look forward to giving you even more to cheer about in 2012!