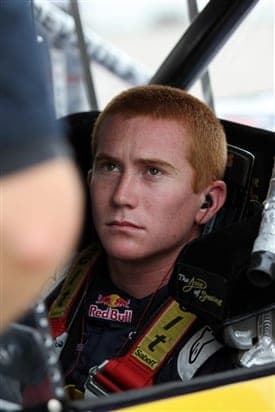 _A new repaving often leads to new opportunities for underdogs to succeed. Old track notes become irrelevant, putting every team on the same page and opening the door for a crew chief to think outside the box. The right setup, paired with a little track position should have left David in the perfect position to aim his slingshot straight towards Goliath._

_Unfortunately for the underfunded teams, a Phoenix retooling proved unforgiving as the one-mile oval swallowed them up and spit them out. One by one, promising runs fell victim to the outside wall as the reconfigured oval came packaged without the one thing the little guys need to have a successful day: Lady Luck._

*Score One For David*

For Cole Whitt, just reaching the finish without too many scratches on his No. 84 was a job well done.

The bright spots were few and far between this Sunday, but let’s give a call to rookie *Cole Whitt* for an uneventful Sprint Cup debut. Running 25th, two laps off the pace after qualifying an impressive 19th Whitt showed why he was all the rage not long ago, leading the Truck Series point standings for much of that season’s first half. The day was “uneventful” for the California native, but in reality for your first Cup start that’s what you’re looking for. There were no scuffles, no ruffled feathers, just the simple task of logging laps and gaining experience. Too bad for Whitt there’s not a buyer to push this team forward; under the right circumstances, it looks like he could be the sport’s first true rookie contender since Joey Logano back in 2009.

A few spots behind Whitt was *J.J. Yeley,* driving the Vampt-sponsored No. 38 for Front Row Motorsports. Sure, a 28th-place finish wasn’t spectacular – Yeley ended the day three laps back – but he’s mentioned here because the team did what they had to do. 35th in owner points, with their main rival TRG Motorsports and Andy Lally failing to qualify simply finishing was critical in order to establish some extra breathing room. Now, the gap between FRM and TRG stands at 28, meaning for the No. 71 car to even have a chance Lally has to finish 15th or better next week at Homestead. And since the rookie hasn’t run better than 19th this season… well, you can do the math.

*Score One For Goliath*

It was shocking to see *Robby Gordon* attempt to run the distance this weekend in his self-owned No. 7 Dodge. It was just the second time since Watkins Glen, in fact, this car planned on trying to make it to the checkered without parking. But what was not as shocking, especially with Phoenix’s treacherous track surface and Gordon’s limited schedule as of late was seeing the aggressive driver push it a little too deep and pay the price.

Robby Gordon still has his legion of dedicated fans, who always rally for their driver – but they can’t give him the money to keep competing on the Cup circuit.

“We struggled to pass,” he said of the Lap 220 incident that ended his day. “I think everybody struggles to pass and I drove down onto the apron, a lot like (Elliott) Sadler did yesterday, and soon as I got back up to the main groove, it got loose on me. It’s a bummer. It was a brand new Dodge Charger and now it’s probably going to need a front and rear clip on it.”

What’s more, Gordon’s day seemed to reinforce the idea start-and-parking is the way to go for a program that hasn’t had the funding needed to compete in months.

“If you can’t stay on the lead lap,” he said. “It doesn’t make any sense to race. It’s just my opinion.”

“I learned you need to bring the best race cars that you’ve got every single weekend and it just takes money and right now, we don’t have enough of that.”

At least Gordon got to run to halfway. For *Regan Smith,* perhaps the series’ most successful underdog the car didn’t even make it to Lap 3. Coming through Turns 3 and 4, David Ragan got loose, lost control right by Smith and the No. 78 Chevy was simply along for the ride after that. Crumpling all sides of the Furniture Row car, Smith was sent back to the garage for lengthy repairs and ended the day a disappointing 38th.

Between DNQs and DNFs, poor *Geoff Bodine* is finding a return to Cup, especially at his age far worse than expected. The driver of Tommy Baldwin’s No. 36 spun no less than three times Sunday; by the third, the car was too damaged to continue. He wound up 37th, the second straight race he’s ended his day early after a wreck.

*Who Won This Weekend?*

Hmm. No real underdogs in the top 20, several cars crashed out and Bodine making a mockery of one of the few underfunded teams running the distance each week. I’d say *Goliath* had himself a rout.