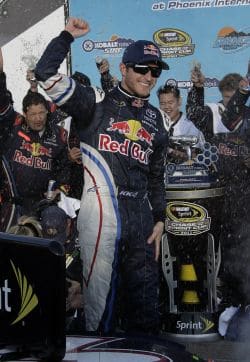 The Key Moment – Kasey Kahne elected to pit early for his final stop. Meanwhile, Carl Edwards was leading the race but ran up on his old buddy Brad Keselowski, who was trying not to get lapped (and perhaps sending some subtle payback Edwards’ way.) By the time the No. 99 abandoned the effort to pass the No. 2, Edwards had given up too much time to Kahne.

In a Nutshell – At least the race wasn’t the wreckfest we all feared. Edwards and Stewart kept their respective fans on their feet most of the afternoon.

Dramatic Moment – As is typical in today’s Cup racing, the most dramatic moments followed each restart, particularly when Tony Stewart and Edwards were side by side. The new track configuration and rain early Sunday that washed away much of the rubber from the track usually put the drivers in the outside lane at a distinct disadvantage… unless they had a big number No. 14 painted on the side of their car.

Given the stresses on the team members not knowing if they’ll have jobs after next Sunday, a win by the Red Bull Racing team was a notable achievement bordering on remarkable.

I also found it remarkable how well Stewart ran in a satellite Hendrick car while the home team boys (the Nos. 24 and 88 in particular) were so off-song all afternoon.

Cleared to race though not running the colors of his primary sponsor, Kyle Busch’s weekend at Phoenix didn’t get off to a good start. Before he could even get out of the garage area and onto the track for first practice, he lost an engine. After starting 43rd, Busch had driven to a remarkable third place before he lost another engine. Perhaps there’s a lesson there that it isn’t wise to let your behavior cause a week-long distraction to your team.

So if Stewart does win the title next week, does the trophy get displayed at his shop or at Rick Hendrick’s? It’s a bit disingenuous to compare Stewart’s outfit to Alan Kulwicki’s when discussing the last championship won by an owner/driver. Kulwicki didn’t have Junior Johnson building his engines and chassis.

The drum beats started before Morgan Shepherd’s mangled race car had even slid to a stop. People want to compare Jason Leffler’s incident with Elliott Sadler in Saturday’s Nationwide race to last Friday’s Busch/Hornaday brouhaha at Texas. In both instances, a driver not running for a title took out a title contender, ending their chances at being a champion this year. But there’s a bunch of key differences.

A) Leffler is a Nationwide Series regular.
B) The incident took place under green, not under caution.
C) After exiting the infield care center, Leffler expressed immediate and sincere remorse about what had happened, accepting full responsibility for the incident and apologizing for his actions.

It was still a dumb move, and it was costly to Sadler and his team, but there’s really no comparison between what happened last Friday and what happened Saturday.

Yeah, I think Brian Vickers should be parked for next week even if Matt Kenseth was only barely mathematically still in the title hunt. I doubt NASCAR will do so, but Vickers isn’t doing much lately to see that he’s not unemployed and parked on the sidelines for next year’s Cup season.

After the race, Edwards was asked if there was any track he’d rather be heading to next week to decide the championship (he has won two of the last three Homestead season finales.) When asked Sunday, Edwards could only think of a few dirt short tracks he’d prefer, while Stewart chimed in he owns a dirt track in Eldora and would be happy to settle the score there next weekend instead of Homestead. Now THAT would be interesting.

I don’t pretend to be a physics major, but something didn’t appear right with the SAFER barriers at Phoenix this weekend. Whether it was the new track configuration or the amount of incidents, I’m not sure, but it certainly did appear the barriers were “pocketing,” catching a spinning car and bringing it to a rapid stop rather than allowing the stricken vehicle to slide along while spreading the impact over a greater period of time. Some incidents, particularly during the K&N series race, seemed to tear cars apart to a greater extent than expected. By the way, congratulations to Bill Elliott’s 15-year-old son Chase Elliott, who finished third in that event. And thanks to SPEED for sticking with the TV coverage, even though a pair of red flags led the race to run over an hour beyond its scheduled time slot. Not all networks provide fans with that courtesy… ahem.

Well, the troubled honeymoon between race fans and ESPN is well and truly over. When Saturday’s Nationwide race ran long due to all the caution periods, ESPN ended their broadcast without so much as interviewing surprise winner Sam Hornish Jr. Fans watching the race were told to switch to ESPNNEWS for post-race coverage. The coverage did, in fact, switch to that network after an interminably long delay. Blogs like the Daly Planet lit up immediately. Whatever good will ESPN bought back to the table thanks to fond memories of their classic coverage of the good old days has been squandered. (Though those with long memories might recall the good old days weren’t perfect, either. ABC once cut away from a Busch Series race before it concluded due to a contractual obligation to show a half-hour pre-race program leading up to the Kentucky Derby.)

Isn’t it a bit ironic when race fans miss live coverage of a restart because ESPN is showing a full screen graphic touting their “Non-Stop” coverage?

Kenseth won the pole for the event and led early. He began to fade as his brakes did the same, dropping him back into the field and into the clutches of Vickers, who apparently felt there was still some payback due after Martinsville.

Kurt Busch, who’d been complaining about his car much of the race, took a surprising turn at the lead but ran out of gas. Busch and the team had trouble refiring the No. 22 car on pit road afterwards; then, to top it all off he got nailed for speeding entering pit road. That left him plummeting to 22nd.

Jeff Gordon had brake issues but it probably didn’t matter much. He’d been slow all weekend, anyway and a 32nd-place finish was the end result. I’d guess Gordon would be more than happy to help dig up the Phoenix track surface again this year.

Geoff Bodine’s return to Cup racing has been less than stellar. He was involved in three incidents on Sunday, ending his day a disappointing 37th. And here’s the amazing part… none of those crashes involved Vickers or Kyle Busch.

Stewart has had a remarkable run over the last three races, with two wins and a third-place finish. Despite some physical races in that stretch, Stewart’s cars have had nary a scratch on them after those events. Is there a lesson here?

Paul Menard thought he had an engine going south early, then got trapped a lap down in the pits when a caution flag flew. He got a free pass back onto the lead lap and drove on to a ninth-place finish.

A dropped lug nut on a pit stop caused AJ Allmendinger to restart the race mid-pack, but he was able to recover well enough to finish sixth. Coupled with an eighth-place finish by Marcos Ambrose, it was yet another good day for Richard Petty Motorsports. And to think, at this time last year few of us thought RPM would even survive to compete in the 2011 Cup season.

Former motocross wizard and current Truck Series competitor Ricky Carmichael was lucky to walk away from a horrific accident on a roadway near the track Friday night. Carmichael was following a Jeep Wrangler on a two-lane highway when a vehicle coming in the other direction crossed the center line of the roadway. It struck the Jeep with such force that a tire/wheel assembly was torn off that vehicle and impacted Carmichael’s ride. Carmichael’s wife and a friend, who were passengers in the vehicle he was driving also escaped injury.

It hasn’t been easy for former open-wheel racing champion Hornish Jr. to gain a foothold in NASCAR racing, but Saturday the part-time Nationwide Series driver showed he belonged here with his first career win in that series.

Vickers’ latest dastardly deed dropped Kenseth two spots to sixth in the standings, two points behind Johnson. And then… the thundering pack has left them in the dust. Earnhardt holds serve in seventh spot, but is a whopping 102 points out of the lead. (As an aside, Earnhardt’s teammate Gordon fell three spots to 11th. So why is everybody discussing what a lousy season the No. 88 team has had while not noting the struggles of the No. 24 outfit?)

Kurt Busch and Newman are tied, 107 points out of the top spot. Busch gets the nod for the eighth position currently with his two victories to Newman’s single win. Hamlin is 10th, then Gordon while Kyle Busch fell another spot to 12th in the standings.

Kahne’s late season resurgence moves him within five points of Bowyer for the less-than-coveted “Best Of The Rest” spot, 13th in the points. Some notable drivers that have just one more race to gain any form of redemption in the standings include; Mark Martin (20th), Jeff Burton (22nd), Logano (24th), and Jamie McMurray (27th).

Overall Rating (On a scale of one to six beer cans with one being a stinker and a six-pack an instant classic) — We’ll give this one three bottles of Corona, still damp from having been floated across the Rio-Grande-o, across that lazy river.

Next Up – With bruised ribs and broken rhythm, the beat up old Buick that has been this year’s Cup season limps off towards Homestead gushing oil from every gasket, smoking badly, listing hard to the right and with a bad rod knock. One way or another, this interminable season ends next week so we’ll all have something to be thankful for the following Thursday.