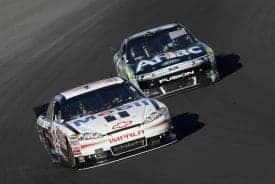 Well, sports fans, it all comes down to 267 laps in South Beach. Either Carl Edwards will be a NASCAR Sprint Cup Series champion, for the first time, or Tony Stewart will have to find room for his third NASCAR Sprint Cup on the mantle.

After 312 laps at the new Phoenix International Raceway, neither driver could gain ground, and we’ll go to the final race (Game 36, if you will) with just three lousy points separating the two drivers.

It comes down to one more race at Homestead and a three-point margin between leader Carl Edwards and pursuer Tony Stewart.

That means there will be a reason to tune in to the season-ending Ford 400, and a reason to pick sides: Team Carl or Team Tony. There’s the old vs. new angle, the clean-cut vs. free spirit, the Everybody’s All-American vs. Joe Six-Pack… as long as it’s Schlitz, thank you very much.

This ending is Game 7 of the World Series, Super Bowl Sunday and Derby Day at Churchill Downs all rolled up into one big party.

That begs a question…

Could NASCAR have gotten it this right on purpose, what with the changes to the Chase format (wild-card, single-point scoring system, etc.), or was this more a blind-squirrel-meets-acorn moment?

The only way Edwards can guarantee the title is to win the Ford 400. The three-point margin is the closest heading into the Chase finale in history, and it’s the third-closest since the modern points structure was first installed in 1975.

Stewart needs to finish ahead of Edwards by three spots, lead a lap and beat him by two, lead the most laps and beat him by one spot, or just gain three points and tie Edwards, because he owns the tiebreaker (four victories).

The three-point lead translates to 13 points under the old system.

Give NASCAR credit. They knew the Chase system was flawed and they moved to make it more exciting. It has been that, given Stewart’s explosion and Edwards’ steadiness, plus races like Martinsville that put the needle over so hard to the “what the heck is going on?” side of the tachometer.

There have been your normal clunkers as well, like Dover and Texas (the non-Kyle Busch version, that is), but nothing to make people snap the TV dial to reruns of _The Montel Williams Show._ The fact that Jimmie Johnson was not among those who were contending for the title might have had something to do with the perception that the Chase was more equitable than in past years as well.

But in all the confluence of events that have made this year’s Chase perhaps the most exciting since 2004, the fact that Stewart and Edwards have been so good in the final nine races is a major factor.

Stewart didn’t win a race in the first 26, losing Las Vegas to Edwards in a rare bit of irony. Both drivers have scored 356 points in the Chase. The difference: three bonus points that Edwards received for winning… at Las Vegas.

Stewart has won four of the nine Chase races, including the first two at Chicagoland and New Hampshire, then again back-to-back at Martinsville and Texas.

Edwards has averaged a 5.2 finish in the nine races, with eight top-10s. It’s a classic tortoise-hare deal here, heading to the final race, and this time there’s no clue who will win it.

Stewart has clinched both titles at Homestead-Miami Speedway; Edwards has lost two at HMS. Of course, Stewart entered both the 2002 and 2005 finales with points in hand, and Edwards was always the hound, never the fox.

“We have never gone into Homestead with the points lead,” Edwards verified. “We feel we have the cars and pit crew and have shown that we can gut it out on these really tough days when maybe we don’t have the fastest car. This is going to be good.”

The flipping of the script makes it that much more exciting, in all seriousness. Stewart plays better with a lead, and he has two rings to prove it. We’ll see how Edwards plays with the points in his favor.

Besides the obvious, winning the series title, that big silver Cup and all the money that goes with it, Edwards has a further incentive.

“You know they give a boat away if you win that thing,” he said of the Ford 400. “I saw that boat and I would like to go down there and win it. That would be fun to put a cap on this season. That is what our mission is.”

Stewart, for his part, is just reveling in the fact that he is in this fight to begin with, and he intends to come out of Homestead with the boat, the Cup, and the cash.

“We’ve just got to keep doing what we’ve been doing,” Stewart said after finishing one spot behind Edwards in third. “It’s fun. He’s keeping me honest, I’m keeping him honest. It’s fun when we’re first and second in the points and we’re running first and second on the racetrack the last two weeks. It shows why we’re both in this position.”

“We got to keep the pressure on. Two weeks in a row, we’ve led the most laps. I’m really proud of that, proud of the pressure we’re putting on him. As far as I’m concerned, it’s a dead heat going in there. We just got to do our job like we’ve been doing. To have three top-three finishes in the last three weeks, pretty proud of that. “

What it boils down to is 267 laps on a 1.5-mile track, and it’s really too close to call. As long as they’re both running the way they are, it’s going to hinge on a caution flag, a pit call or a fuel call. It’s that even.

Stewart said there was no point in handicapping the Ford 400.

“It doesn’t matter to me,” he said. “It’s just about getting four more points than he does. That’s all that matters.”

It’s too bad we have to wait seven days to find out who wins and who doesn’t.