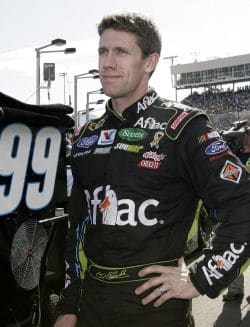 It doesn’t seem possible, but somehow 35 weeks of racing have surpassed us and now it’s time for one final hurrah to end the 2011 season. While the Nationwide and Camping World Truck Series championships are all but wrapped up, the Sprint Cup Series title can probably be best predicted by flipping a coin.

With that said, we’re still going to crunch the numbers of those championship contenders — and others — as the 2011 season comes to a close. Oh, how time flies…

Confident Carl Edwards is ready to rumble at Homestead. Will his consistent track record take him all the way to a first Sprint Cup?

*Carl Edwards* – If consistency is the name of the game, then Edwards has the upper hand. The Missouri native has finished no worse than 11th in the past 12 races and has held the points lead for over half the season, meaning that if Tony Stewart wants the championship he’s going to have to wrestle it away (but more on that later).

In addition, Edwards’s Homestead statistics are also staggering. He’s won two of the last three races at Homestead-Miami Speedway and hasn’t finished any worse than 14th in his seven total starts.

If Edwards is able to hold onto the points lead in Homestead, not only will it be his first Sprint Cup Series title, he’ll forever be known as the driver who dethroned Jimmie Johnson. And that’s the most important part!

*Tony Stewart* – While consistency is something that Stewart has struggled with this season, he does have two previous championships to his credit which could give him somewhat of an advantage on Edwards. He’s been through the pressure of standing on the pre-race grid with the weight of the world on his shoulders, and he’s beat the odds twice.

However, the stakes have never been this high as Stewart has headed into both titles already holding a comfortable lead. This go around, he’s going to have to come from behind and beat a driver who has already more than proven himself this season and had much success at this weekend’s track.

In fact, Stewart’s statistics at Homestead-Miami Speedway are rather diverse. While he won in his first two starts at that track back in 1999 and 2000, and that was over 10 years ago. More recently, he’s struggled with only two finishes inside the top 10 in the last six races, bringing his average result to a rather underwhelming 12th.

However, let’s not forget that Stewart has been on a hot streak as of late and that two of his four victories this season have come at tracks with a similar configuration as Homestead.

So … heads or tails?

*Honorable Mention:* Richard Childress Racing driver *Jeff Burton* has struggled through a majority of the season, but has begun to improve upon his 2011 stats. He finished in the top 10 for two consecutive weeks in Talladega and Martinsville recently, the first time he has done so all season. A fourth-place run in Phoenix gives him three top 10 results in the last four races, which is a good way to finish out a rather dismal year regardless of where he finishes in Homestead.

A.J. Allmendinger is leading a 1-2 punch with RPM teammate Marcos Ambrose down the stretch as both teams gear up for 2012.

*A.J. Allmendinger* – Poor Allmendinger must be feeling awfully left out this season, as it seems everyone but him has a victory now. With drivers like Regan Smith, Paul Menard, and even teammate Marcos Ambrose winning their first career Sprint Cup Series races this year, Allmendinger remains the only driver in the top 30 aside from David Gilliland who has never won a race at NASCAR’s highest level.

However, he’s getting very close and it would be no surprise to me if he won one of the first few events in 2012. He’s had more top-10 results in 2011 (10) than any other previous single season and has a better average finish than in any previous year. Eventually, A.J.’s going to strike it rich and he’ll no longer be a part of that now almost empty winless drivers club.

*Clint Bowyer* – If anyone ever wanted to finish the season out on a high note, it’s Bowyer. Homestead will be a bittersweet goodbye for the 32-year-old driver, who is leaving the team that gave him his start — Richard Childress Racing — for Michael Waltrip Racing at the conclusion of 2011. Personally, I’m still shocked I ever even had to write that sentence, but in Daytona next season Bowyer will be behind the wheel of a Toyota. That’s going to take some getting used to.

Bowyer has managed to grab a victory this Chase, though, winning at Talladega by mere inches over teammate Jeff Burton. Even though he isn’t a Chase contender, he’s managed to grab a few Chase-worthy top-10 results before the season comes to a close and give the team who is now in fear for their jobs something to be proud of. I hear MWR has some openings…

*Honorable Mentions:* Nationwide Series regular *Trevor Bayne* is ending the year on a high note, earning five top-10 results in the last five races including a victory in Texas. It’s been an up-and-down year for the 20-year-old driver, but it looks like he’s going to finish it out strong.

Considered a favorite to win the 2011 Chase, Kevin Harvick is spending this week wondering where it all went wrong.

*Kevin Harvick* – Harvick has had an up-and-down Chase this season, and unfortunately for him the “downs” were low enough that it knocked him out of title contention. Though he’s third in points, five finishes outside of the top 10 definitely didn’t help his cause to remain competitive in this title hunt, and he’ll likely finish in the same spot he did last season (third).

In Harvick’s defense, he’s been in the top 5 in points through a large majority of the season and the only drivers with the same amount of wins as him (4) are Tony Stewart and Kyle Busch. In other words, he’s had a good season but has fallen off as the Chase moves further along. That’s a shame since adding Harvick into the trash-talking that is already going on between Stewart and Edwards would add to the entertaining season.

However, with RCR shrinking back down to three cars and back to a number that has been successful for the organization in the past, Harvick should be that much stronger in 2012.

*Brad Keselowski* – Like Harvick, Keselowski has had an up-and-down Chase but recently started to see a Cinderella season crumble beneath his feet. Keselowski also has five results outside of the top 10 in the Chase’s nine races, including in the last three.

In all honesty, Martinsville really wasn’t his fault as just about everybody wrecked there; Keselowski then got bit by fuel strategy in Texas and Phoenix. However, handling issues played a key role in his finishes in all three of those races, which is not an issue that Stewart and Edwards are facing on a regular basis if you catch my drift.

Don’t get me wrong, it was great to watch Keselowski have a season no one ever expected him to have. More importantly, it was refreshing to see him translate his Nationwide Series success to the Sprint Cup Series, and do so with an injury. However, predictions that he would contend for the championship were premature as drivers who are that new to such pressure typically won’t succeed in it. In the future, I would imagine Keselowski will be a huge contender for the championship. For now, he’ll just have to reflect on a season in which he showed the racing world that he was here to do one thing: win.

*Honorable Mention:* I was really expecting by the end of the season that I wouldn’t have to keep putting *Mark Martin* here, but his finishes just don’t allow it. It’s really sad to see Martin finish out his “final” (do we really believe him?) full-time season with Hendrick Motorsports on such a poor note, and I doubt that Homestead will be any different. In his first farewell tour, Martin would have gone out with a bang. Now, it will be a miracle if anyone even mentions it.

After a one-race parking, Kyle Busch and Joe Gibbs paired up once again at Phoenix. But how many more chances to improve his behavior does the temperamental driver have left?

*Kyle Busch* – When it rains, it pours. After returning to the track for the first time after intentionally crashing Ron Hornaday in the Truck Series race at Texas and effectively losing his primary sponsor M&M’s in the process, karma wasn’t doing Busch any favors as he blew an engine in a practice session on Friday – bad luck which forced him to start at the rear of the field on Sunday in Phoenix. From there, Busch worked his way into the top 5 only to have his engine fail _again_ just when things were starting to look up for him.

I know Busch is only 26, but this past weekend must have aged him about 10 years — which might be good news for his competition since maturity _usually_ comes with age. I’m not saying he didn’t deserve it — there was absolutely no excuse for his actions in Texas — but a guy can only take so much. Unfortunately, I think a wake-up call for this incident was in order for Busch and may have been just what the doctor ordered for an attitude adjustment. It just might have been a bigger dosage than Busch expected…

*Brian Vickers* – What more can be said here? As much as I want to feel for Vickers, he’s bringing this criticism on himself. Yes, I know his most recent victim Matt Kenseth admitted to letting off the throttle early and that he was out of brakes, but Vickers hooked onto Kenseth’s bumper, stayed there, and continued to push him up into the wall.

Desperation mode has to be sitting in for this guy, as he and a host of many, many other employees at Red Bull Racing are in fear for their jobs, but that leaves no excuse as to the behavior he’s exhibited over the past two weeks. It certainly won’t make him more attractive to other teams since he keeps wrecking his own racecar every weekend, and it definitely won’t bring any sponsors on board. The Busch story should have been enough to show Vickers what sponsors are willing to put up with and what they aren’t, so hopefully he’ll think twice before letting the temper get the best of him next time.

*Honorable Mention:* *Reed Sorenson* has done a good job keeping his head up amidst trying circumstances, though his finishes don’t show it. In the four races since he was released from Turner Motorsports, Sorenson has yet to run any higher than 16th and has fallen from third to fifth in the standings. It’s a sad turn of events for a driver who spent some time atop the standings earlier this year.